You guys! Harvest squash pasta sauce might be all we eat for the rest of the month. The freaking best homemade harvest pasta sauce, right here. I want to eat straight out of the pot. Drink it with a straw. Spoon it over everything!

I almost saved this recipe for a little later in October because, I mean, it’s SUPER fall-like. But then I realized that if we can all make it now, we can eat it for months! Like all the fall and winter months. Forever. Plus, when I’m insanely excited about a seasonal recipe, I can’t hold it back. Even though I work a little ahead on the blog, I can’t ever hold back the ones that make me freak out.

If you are a squash-loving fool like I am, you’re in for a huge treat.

Even if I feel like I’m playing a huge trick on us all because it’s still in the 80s here! Like what.the.heck. This is like a giant hug simmering in a pot. Not that we want a giant hug when it’s 86 degrees out but YOU KNOW.

It’s comforting. It’s satisfying. It can be used in so many ways: as a traditional pasta sauce, as a sauce on zoodles, as a base for mini pita pizzas – so many things. You could even throw it on top of some butternut noodles for squash inception.

It begins with caramelized onions. I mean – the biggest flavor builder of them all! After that, some butternut squash cubes. A little bit of pumpkin. Fire roasted tomatoes because we all know how obsessed I am. Sage, some allspice and a touch of cream. Parmesan of course. 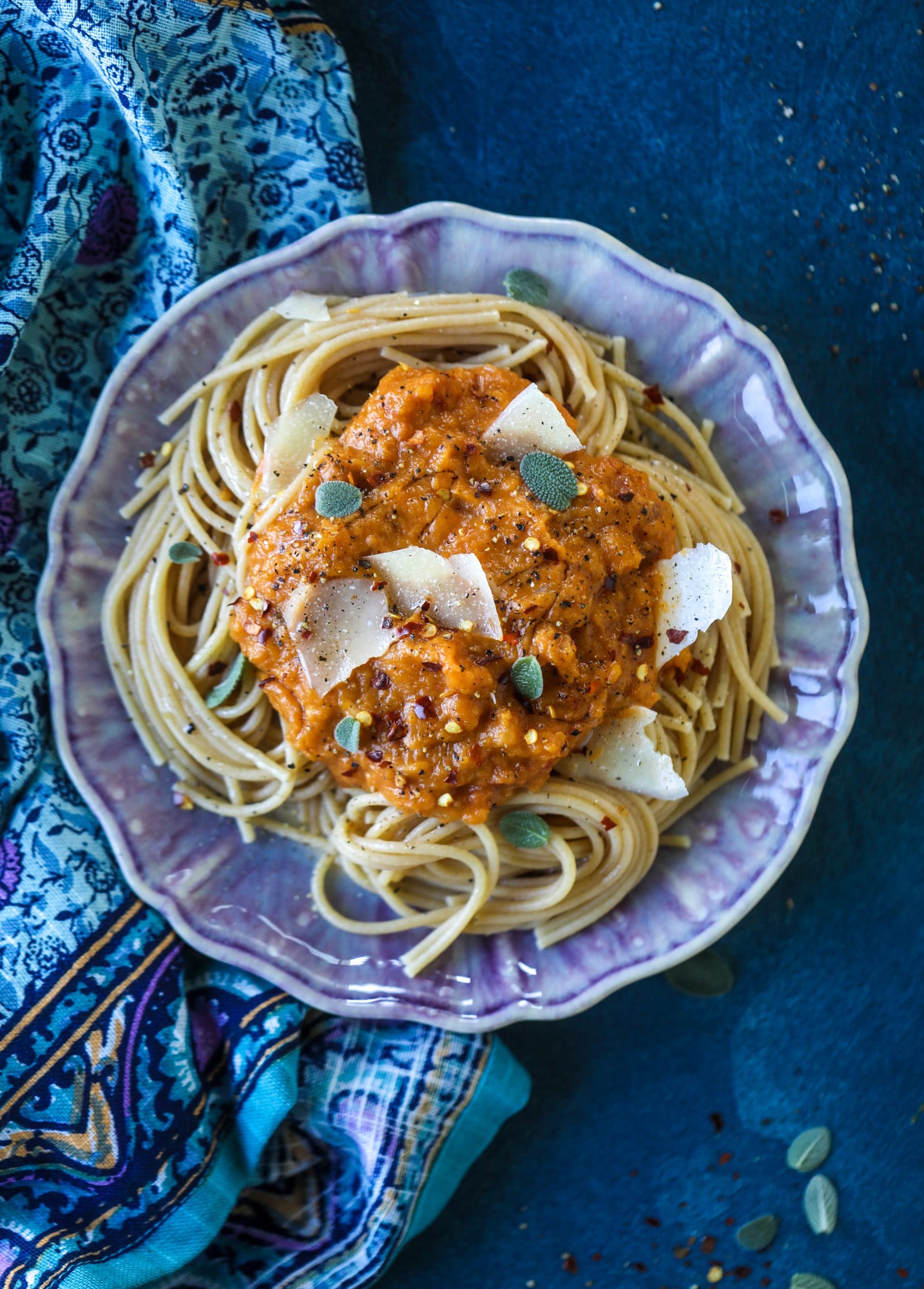 For years (like, years! Longer than I’ve been blogging?) I was obsessed with the fall pasta sauce from Williams Sonoma. I used to buy it every year (along with the pumpkin pancake mix!) and it was one of the things that got me excited for the season. I still buy the pancake mix because I just can’t quit it.

And then Trader Joe’s put out a version of the sauce (that you can serve with those adorable little pasta pumpkins!) and I was like I HAVE TO MAKE THAT. Caramelize the onions, get the squash a bit caramely too and then go ahead and simmer that deliciousness.

Since I’m a texture person, I knew that I wanted a little texture but not, say, huge chunks of squash. You know? First, I mashed some of the squash chunks that were left. Just a quick, coarse mash.

Then I transferred half of the sauce to the blender and pureed it until smooth. I stirred it back into what was left and it created the best consistency of sauce EVER. For me, this was the key to the sauce! I would say it’s a squash-like marinara. It is hearty, but not in a meaty type of way. You could try adding some mushrooms if you’d like, but I think they might change the flavor too much. If you go into your squash sauce experience viewing it like a marinara, you will love it.

Especially if you pair it with a nice glass of red. This is exactly what I want to eat in October. 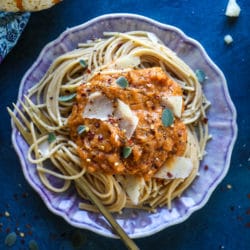