[These cherry cheesecake brownies are sponsored by Harry and David.]

Never did I ever think brownies would bring me so much joy!

Well, that’s a lie. Brownies always bring joy. But to the point where I can’t stop thinking about them? I’m giddy.

See, cherries have always been a THING in our house. When I was a kid, I would get SO excited when my mom would bring the first cherries of the year into the kitchen. I’d sit and eat them one by one and be ridiculously happy. They are quintessential SUMMER to me and the moment I get my hands on some? The happiness ensues. 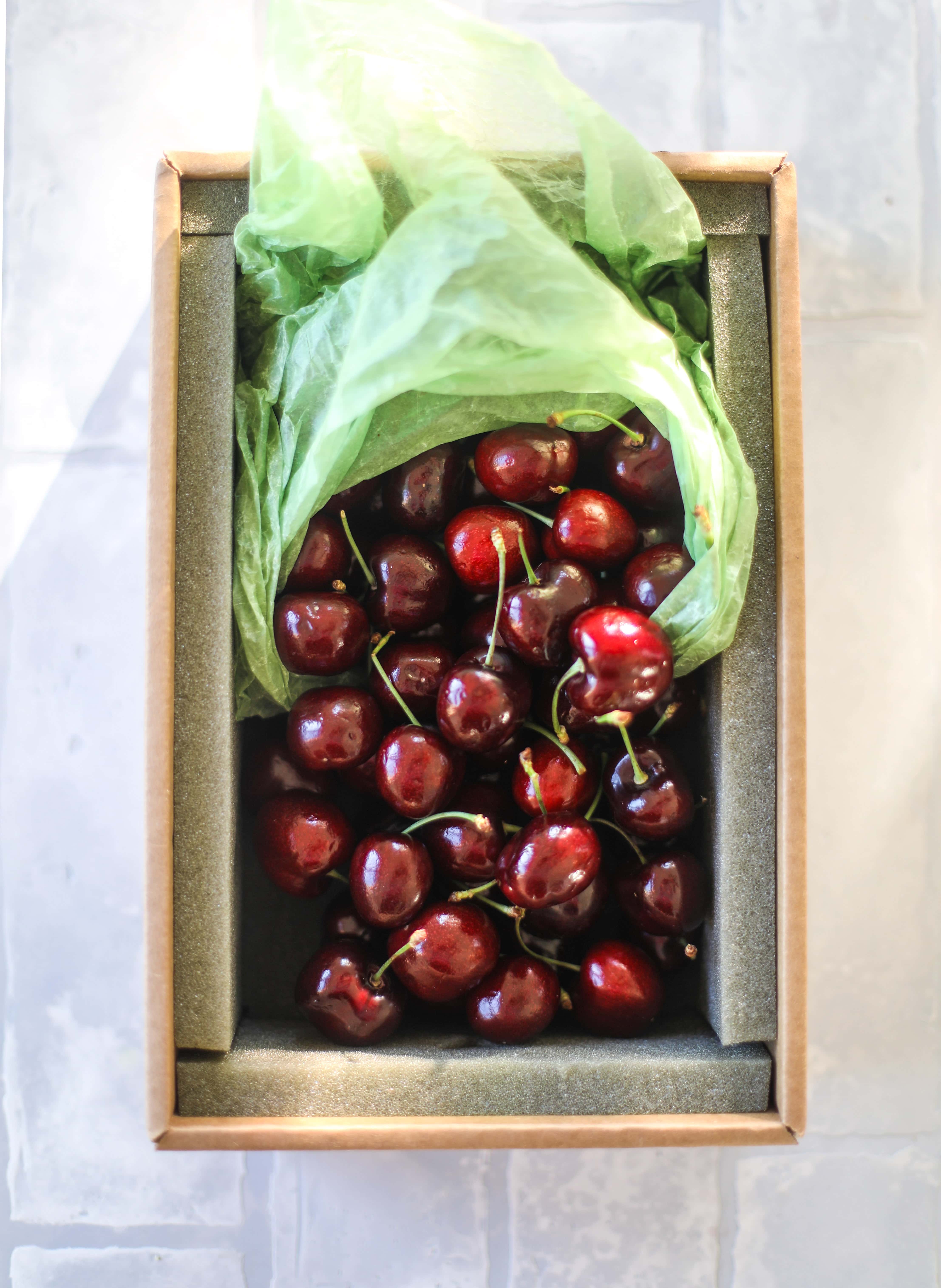 And I’m so excited to be partnering again today with Harry and David! I’ve rambled about it for years, but ever since I was young and we’d get a box of pears around the holidays, I’ve been hooked. And then, when I got to visit Harry and David in 2016? Eeeep. Dream moment.

The best news is that they also have fresh sweet cherries. Oh my word – their cherries. I can’t even type out enough exclamation points.

Their cherries are phenomenal. They arrive in perfect condition (seriously I’ve never got a bad one!) and they are so, so sweet in the best way. We pretty much fight over them in this house. 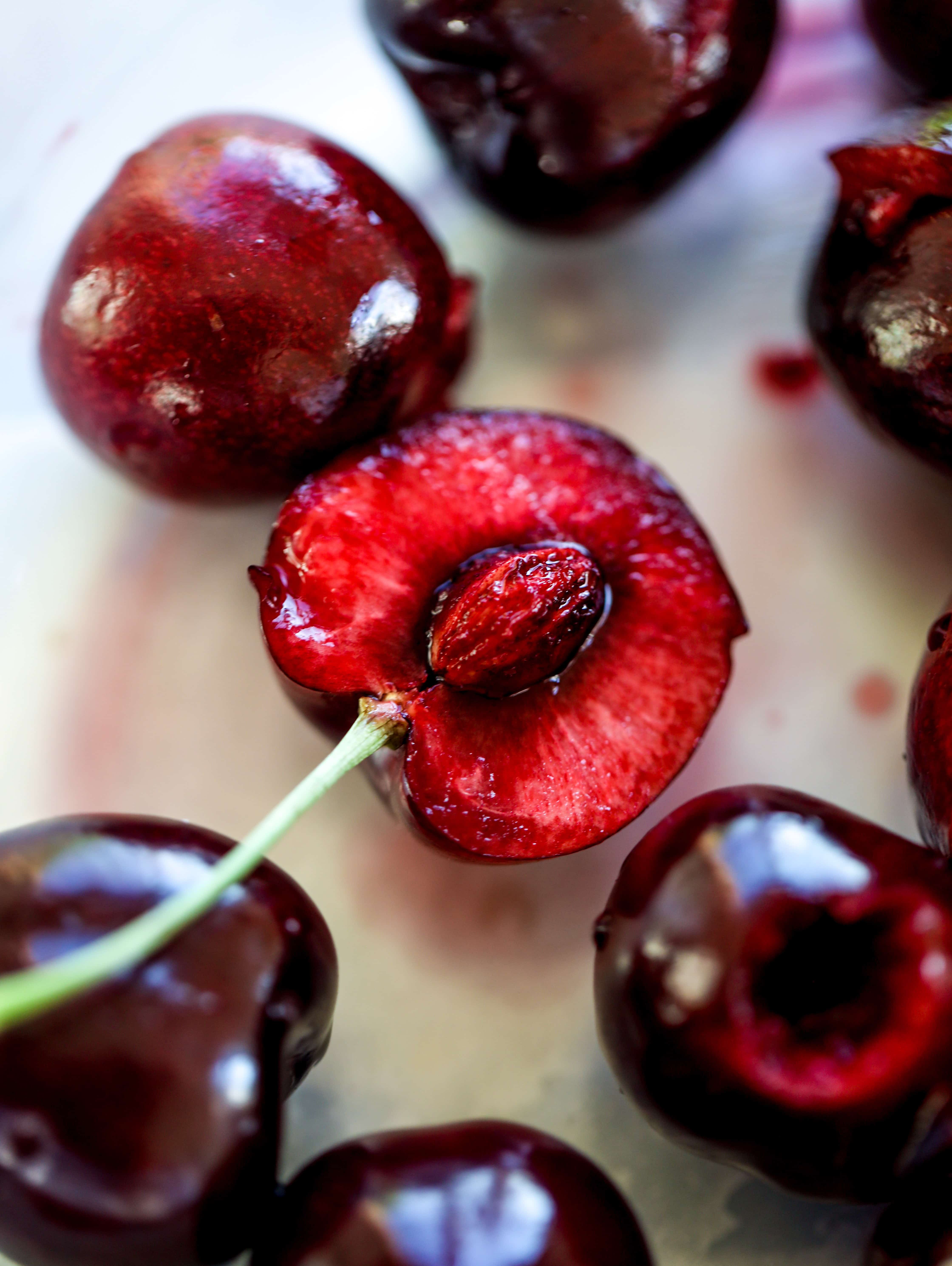 As delicious as they are on their own, I knew I wanted to do something fun with them. Cherry season is one of my favorites to celebrate, so I can’t allow that one to pass me by. Especially when I go and include chocolate.

I mean… just look at this batter. Who needs cookie dough when there is brownie batter like this?!

Yes yes yes let’s get to it. 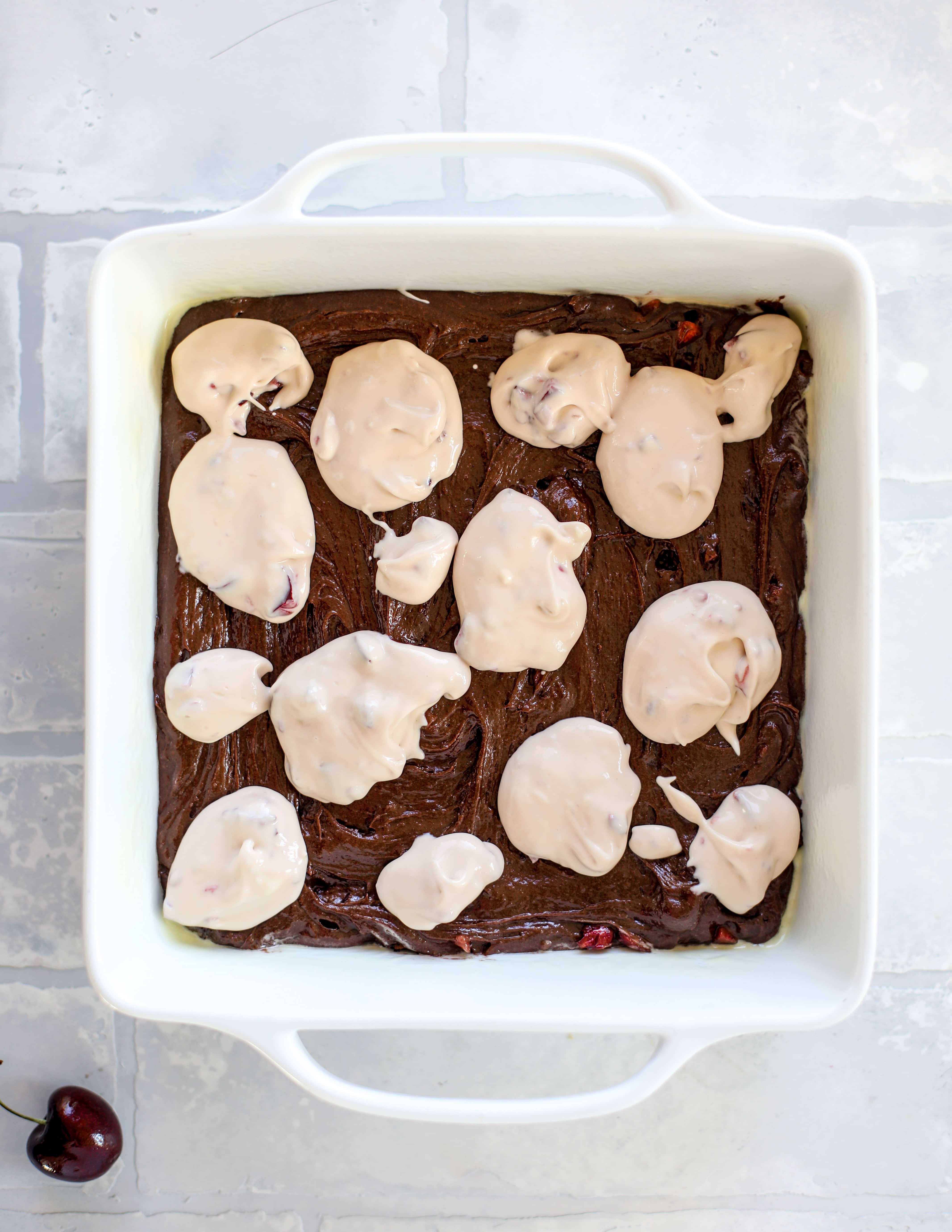 I’ve loved cheesecake brownies forever too, of course. I bet that is SHOCKING.

In fact, if I had to choose that last-ever meal, it would include cheesecake. Or brownies. Or one of each. If presented with the option of a regular brownie or a cheesecake brownie, I’d always choose the cheesecake version. This is probably no secret, given my ridiculous stash of cheesecake recipes here on the blog. It’s just so… creamy. And rich.

And I knew I wanted to make a cherry cheesecake swirl and it was so much easier than I thought! Simply chop up the cherries, add them to your cheesecake mixture, and you’re good to go.

There are also a bunch of chopped cherries IN the brownies, along with chocolate chunks. It’s the best cherry flavor ever because it’s so REAL – and it’s really darn good with all the dark chocolate.

P.S. I would like to frame that brownie batter swirl above, please and thank you. 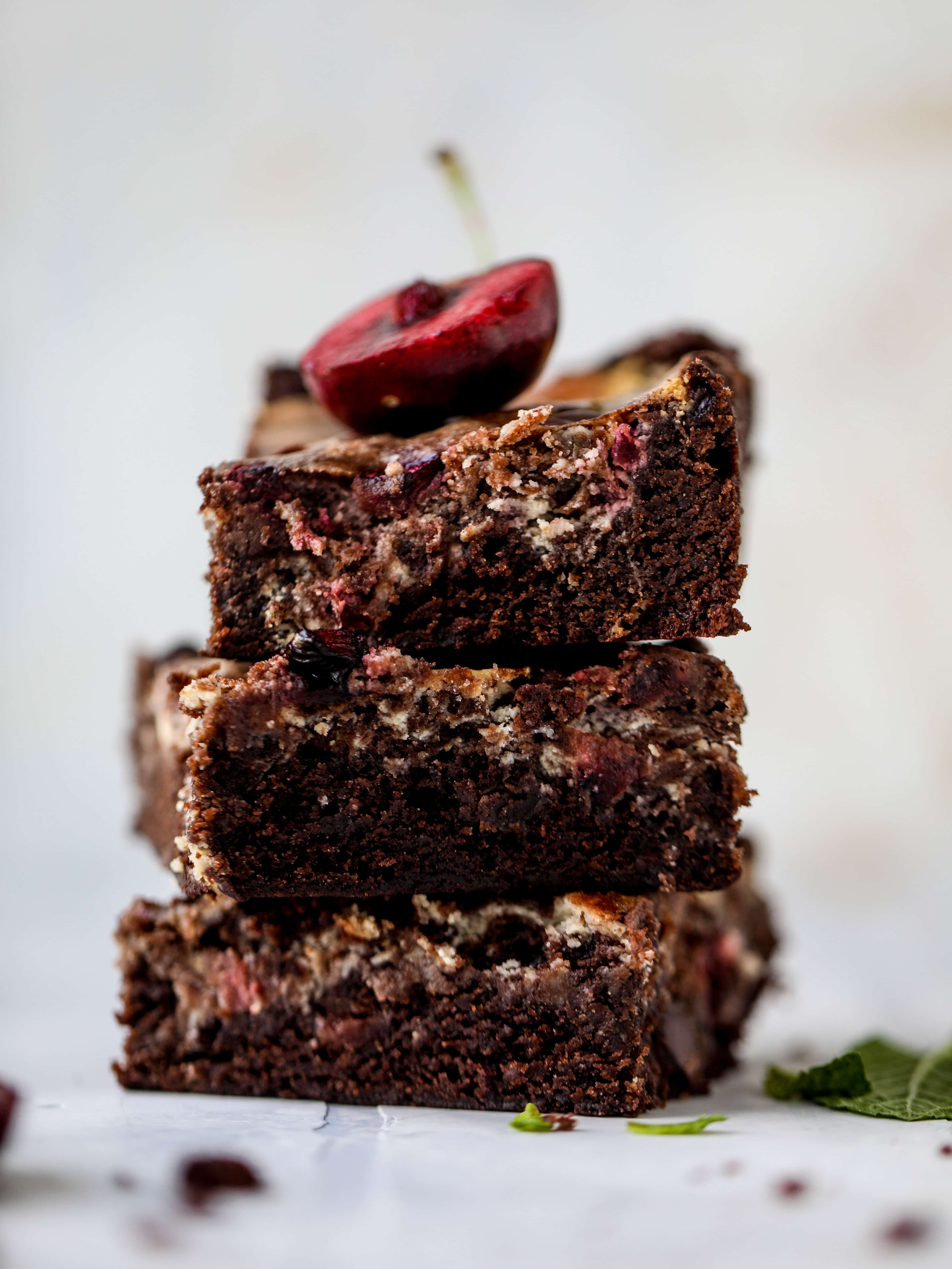 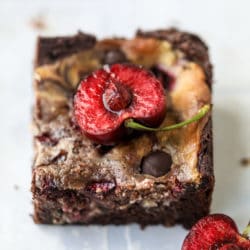 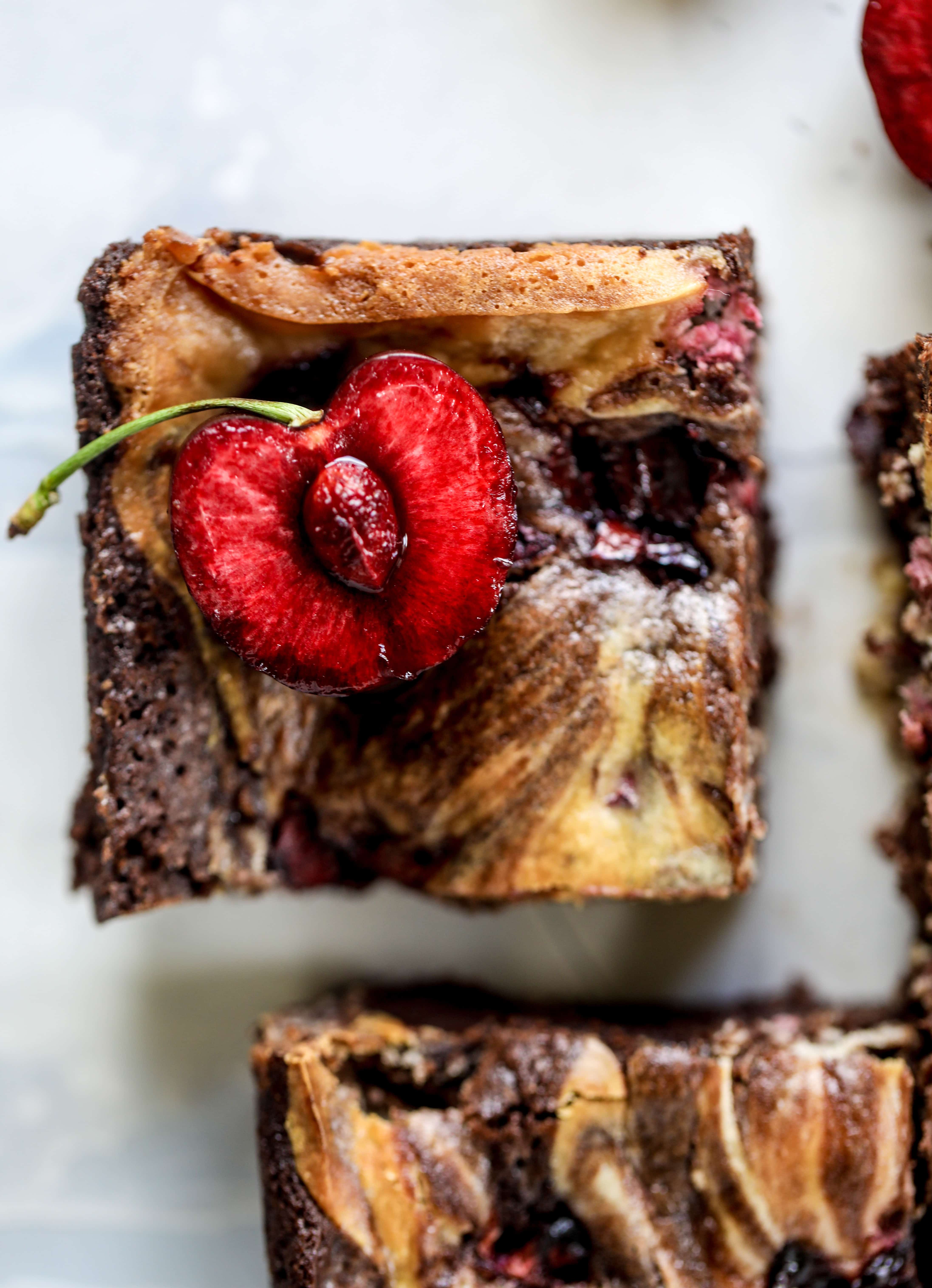