We love these root beer pulled pork sliders! The pulled pork is cooked in the slow cooker until tender and juicy, then tossed with my root beer BBQ sauce. Serve on slider rolls piled high with a crunchy jalapeño apple slaw. So good! 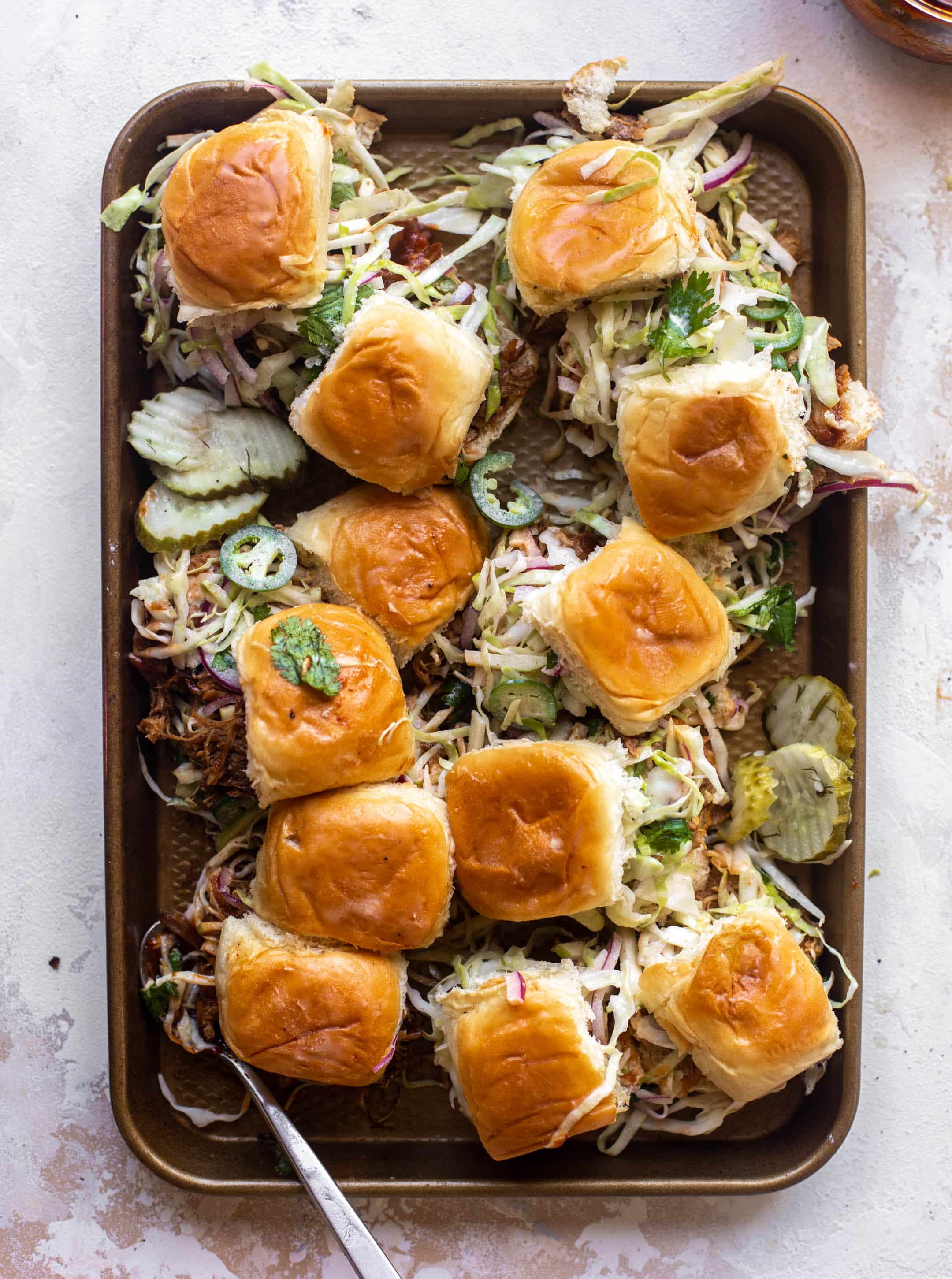 Especially when it’s drizzled with homemade BBQ sauce and topped with a crisp refreshing slaw. This is my go-to pulled pork right now. Can’t beat it! 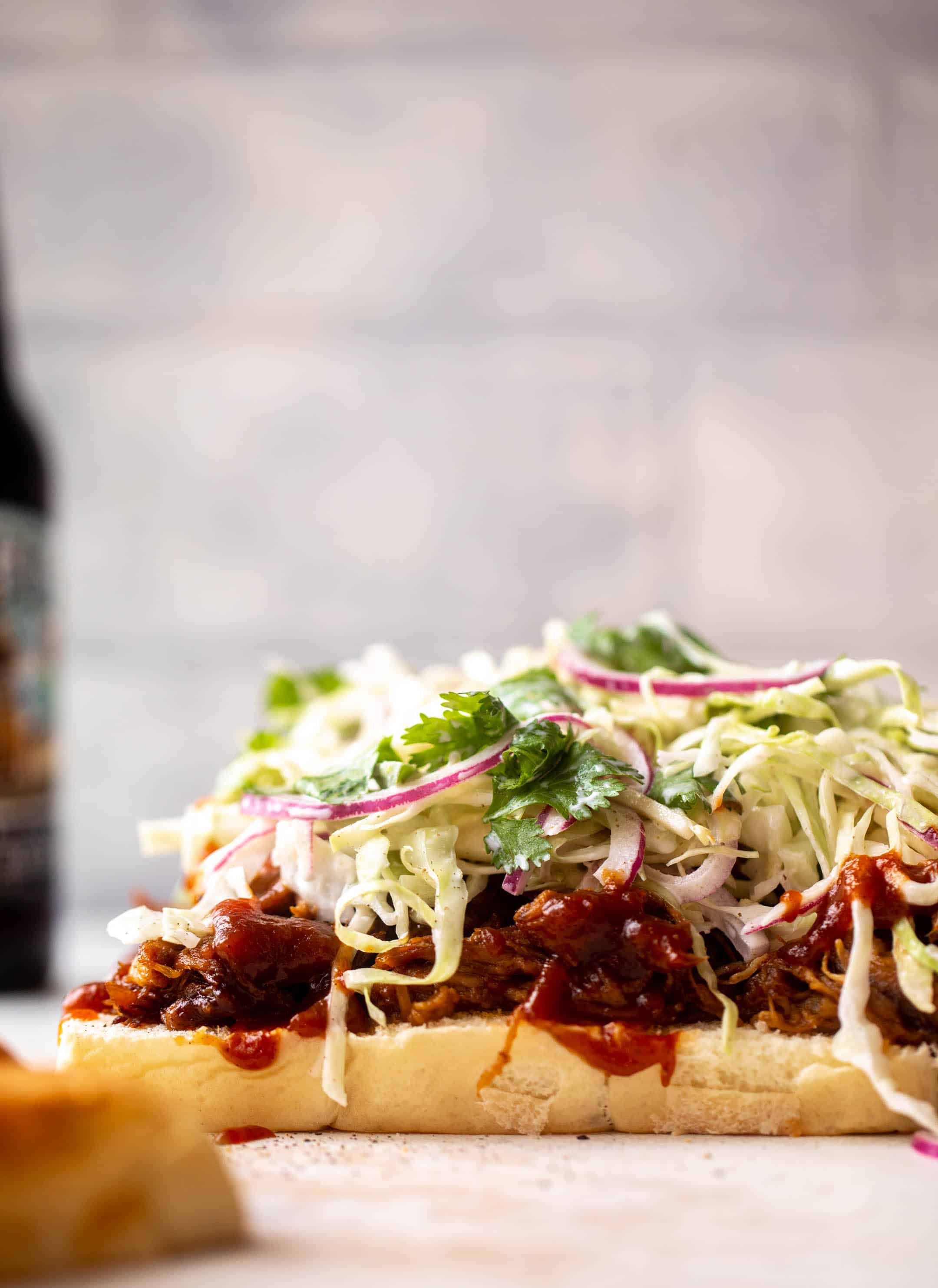 This root beer pulled pork is served on hawaiian slider buns and topped with the crunchiest, creamiest jalapeño apple slaw. A big drizzle of root beer BBQ sauce on top goes a long way too.

These are super fun for a party, game day or even just dinner tonight.

Plus, they are fairly simple. Even though there is a bit going on in this recipe, the pork gets made in the slow cooker overnight and you chop up everything for the slaw the next day. Easy as that! 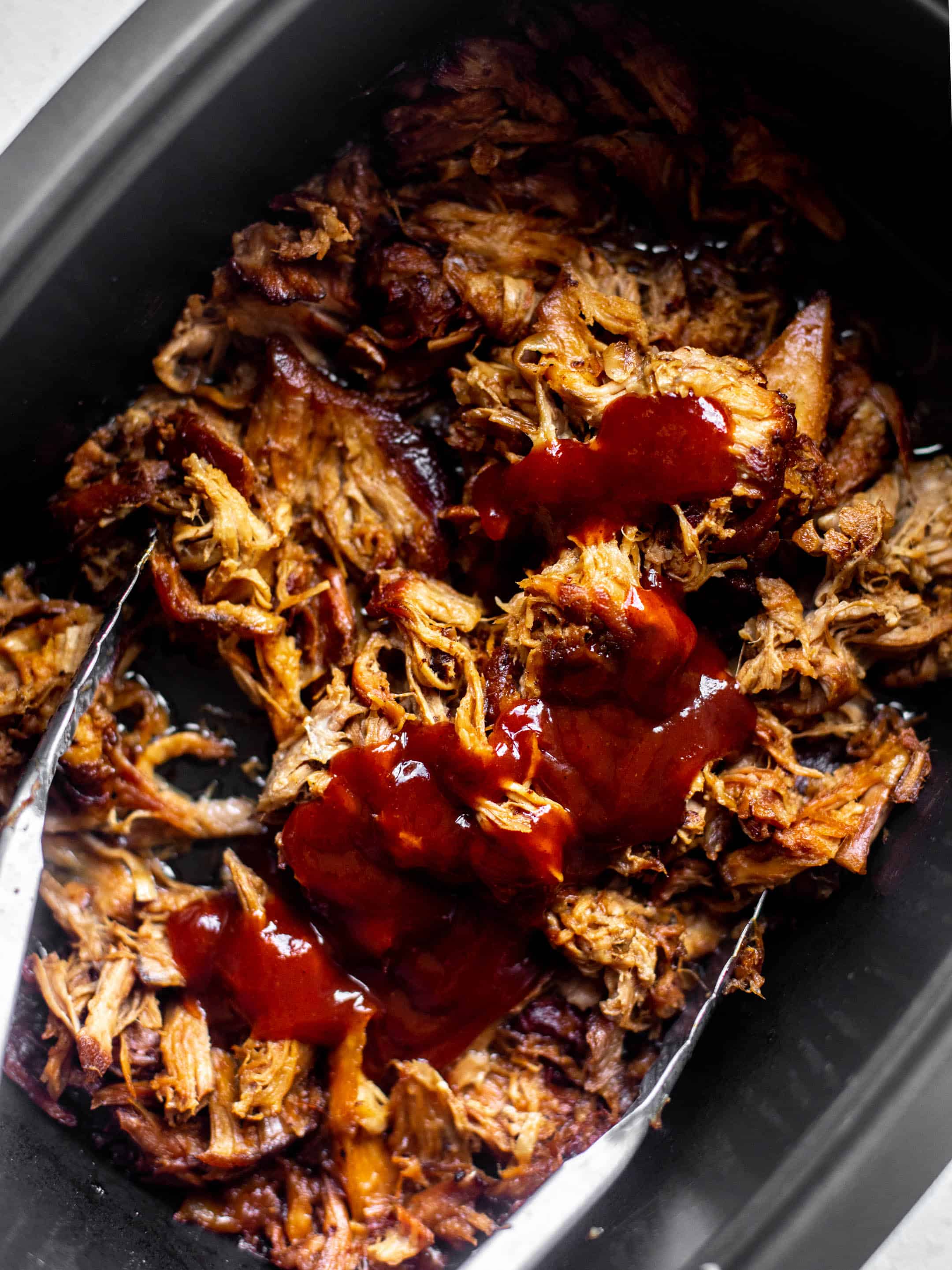 Plus, it’s super easy to serve too. I love making a big pan of pull apart sliders for guests. Everyone goes crazy over them too. 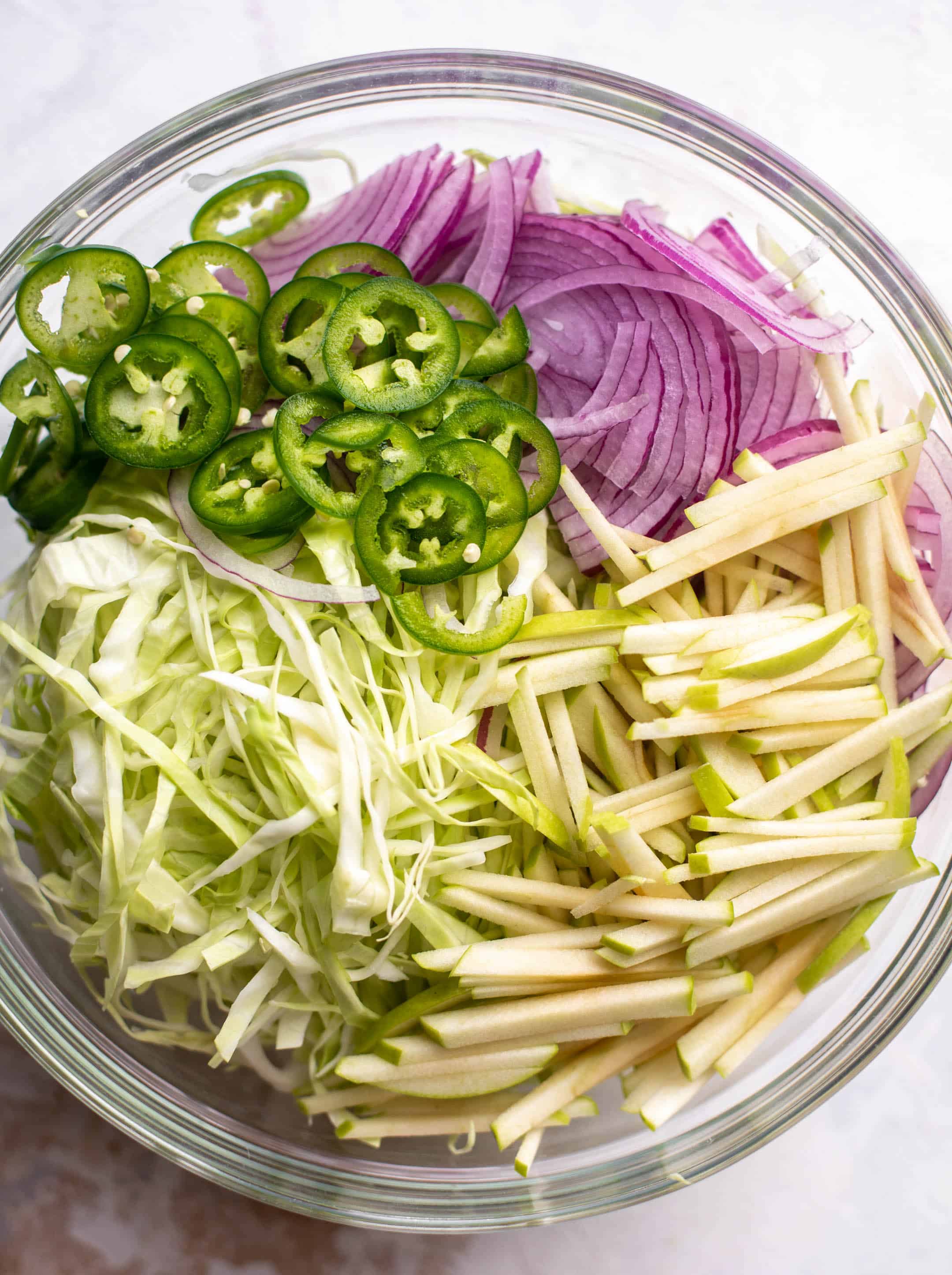 To bring this pork together, I threw a bit of root beer in the slow cooker with the pork overnight. I used the rest of the root beer to make my homemade root beer BBQ sauce which is probably my favorite BBQ sauce of all time. LOVE. It’s tangy, sweet, tart and just the right consistency. Plus it is absolutely wonderful on the pork.

When the pork is finished, I drizzle in the BBQ sauce and toss it well so everything gets mixed and married. The flavor is AMAZING.

You will want to eat it straight out of the slow cooker. I always do.

P.S. I am STILL using this multi cooker slow cooker seven years later. It’s great. I’m not sure I’ve ever used an appliance this long aside from my stand mixer. I love that you can sear/brown meat right in the crock. It’s so easy and makes clean up a breeze. It’s a huge time saver too. 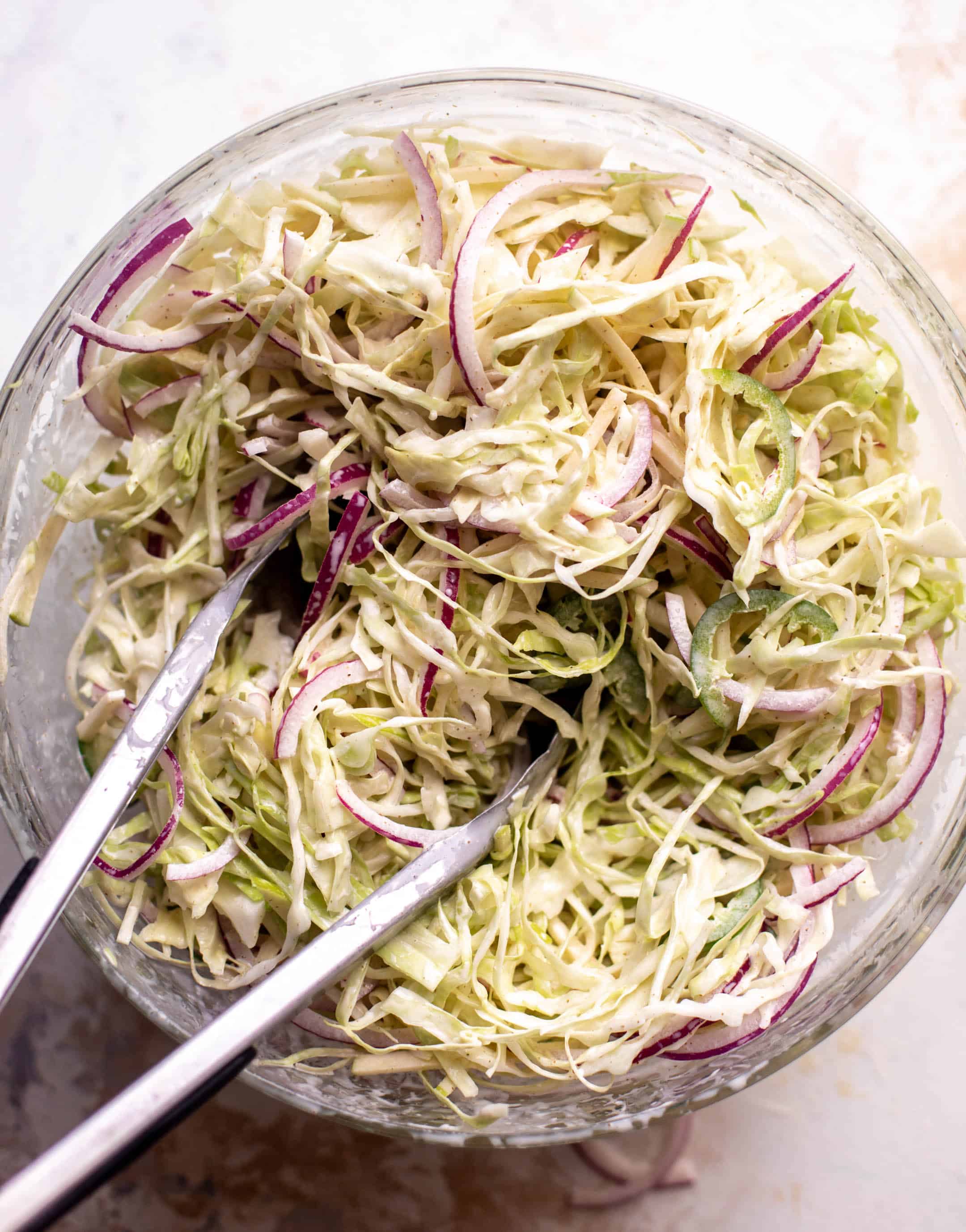 Let’s talk about this incredible slaw. It’s crunchy. And it’s slightly creamy. However, it’s also tart, has a tiny bit of heat and is a little sweet too. It’s super crisp and refreshing.

Here’s the thing. I am not a creamy slaw person. 99% of the time I prefer my slaw to be vinegar-based. Very crunchy, briney and not creamy at all. However, I can make an exception ever so often and that’s how we ended up here.

This creamy jalapeño slaw is so super delicious. First, it balances out the tangy homemade BBQ sauce on the pork. That sauce is extra-vinegary so I like having something creamy and tart with a little spice to balance things out. Second, this doesn’t just have to be a topping. You can serve this as a side salad or make it a base for a slaw with more ingredients. It’s very versatile! 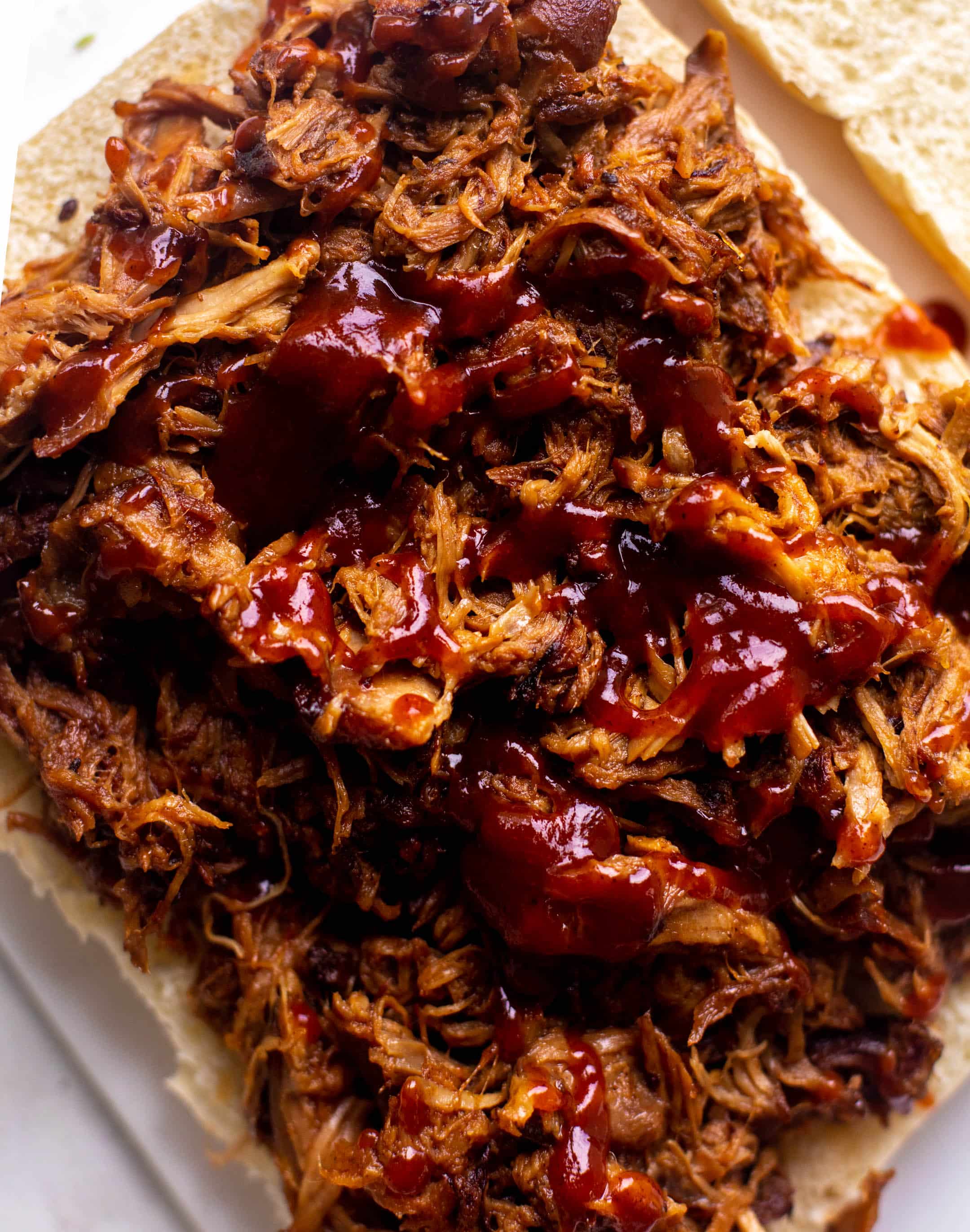 The slaw has cabbage, red onion, apples and jalapeños. A little cilantro too. I remove the seeds from the jalapeños just to keep out some of the heat. Then toss with the dressing.

The creamy dressing has greek yogurt, some mayo, a little sugar and even mustard powder. A few other ingredients that pack a punch. It’s the perfect combination! Again, I eat it right out of the bowl. 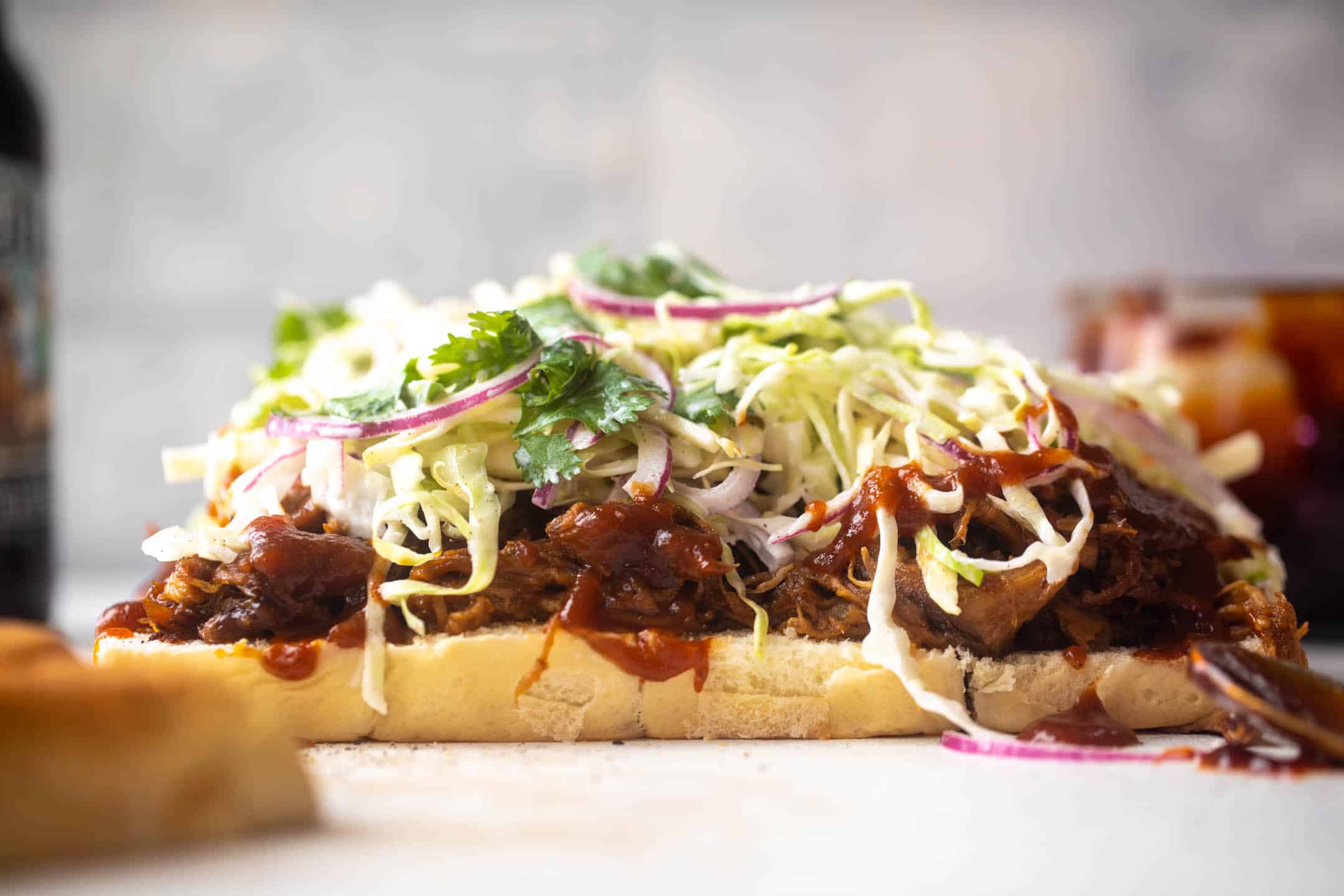 The slaw on the sandwich really takes this over the top. There are so many textures and complimentary flavors going on – it works so well. You can serve them as sliders like I did on a slab of hawaiian rolls or make single sandwiches with these.

If I was serving this for Halloween next week (which I might!), I would keep my pork in the slow cooker, my slaw in a bowl and have a basket of hearty buns next to them. This allows people to build their own sandwiches at their own pace, and the bread doesn’t get soggy.

If you want to make these for dinner or a game day treat where everyone is really hungry and going to eat immediately, I suggest going the hawaiian roll slab route. They pull apart, are tiny which means you still have some room for other snacks and apps and are fun to eat too. Just make sure they are consumed right away, because those buns are soft and will absorb the sauce, pork and slaw mixture and then start to break down. 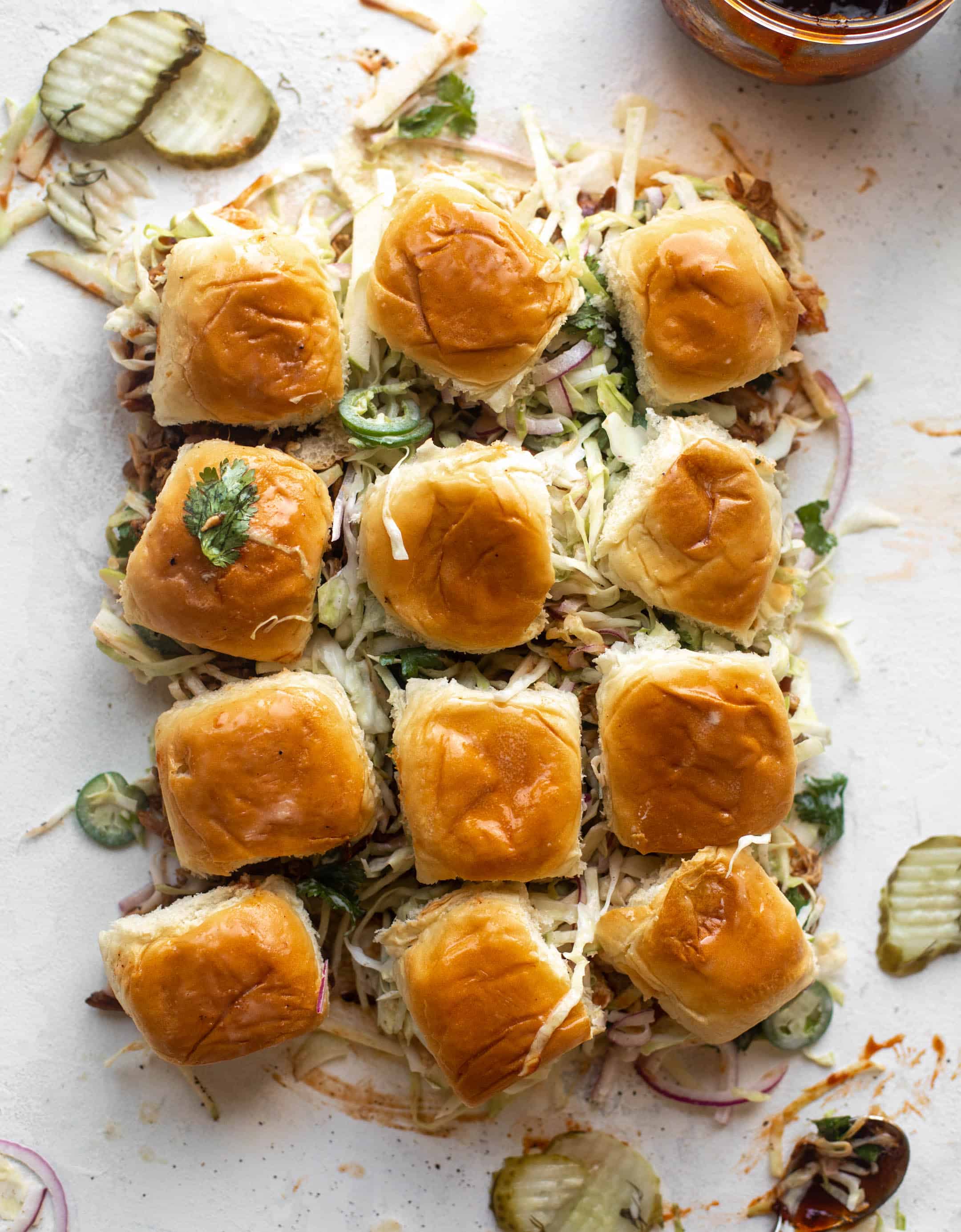 This flavor combination is FABULOUS. The tender pork with the briney root beer BBQ sauce, the slightly spicy and sweet crunchy slaw, the soft hawaiian rolls. 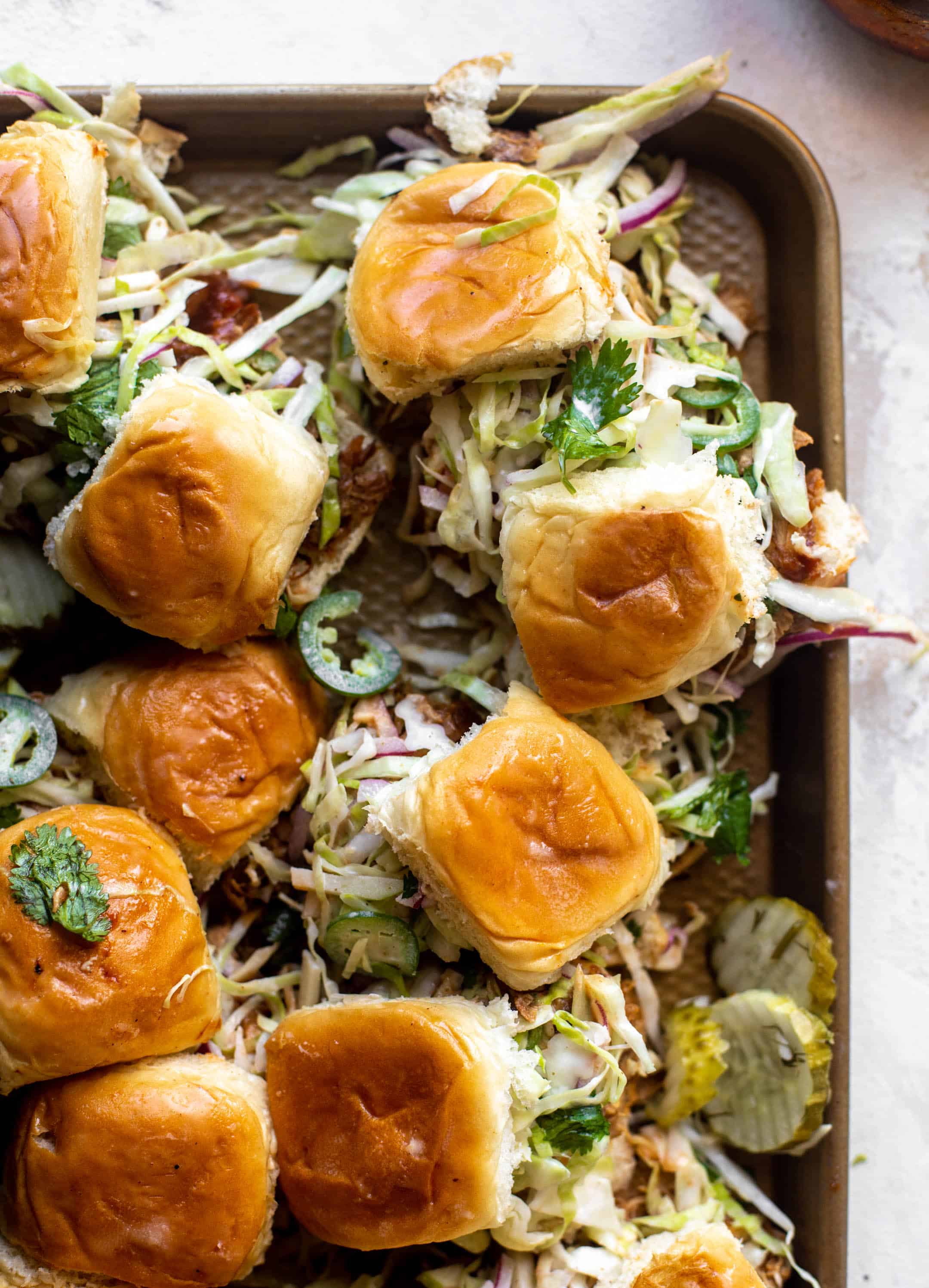 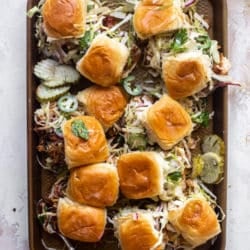 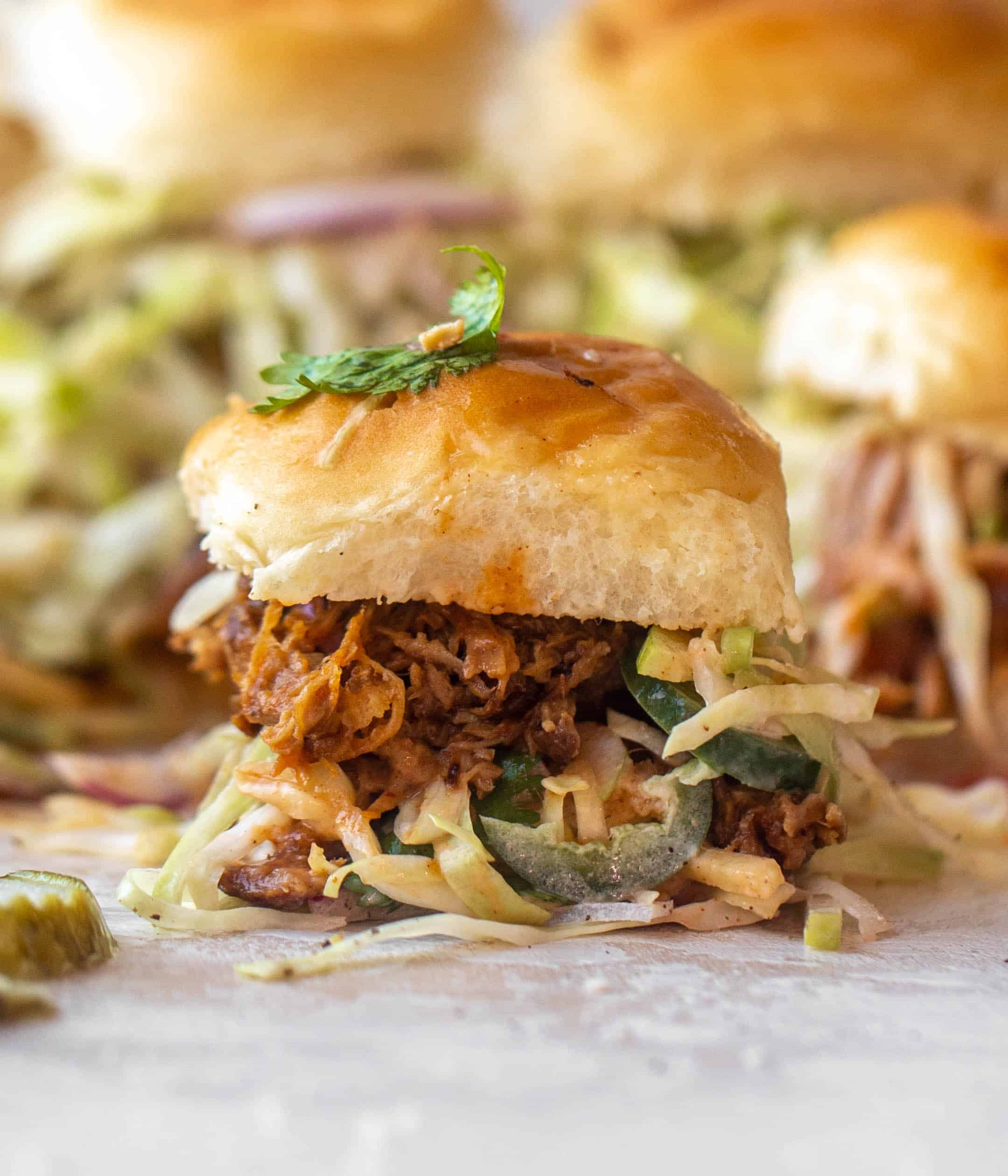