This ham and swiss puff pastry is twisted into a beautiful holiday star and such a delicious crowd-pleasing appetizer! Melty cheese and crispy ham are layered with the buttery, flaky pastry and baked until golden. This is so good!

Your weekend snack has arrived! 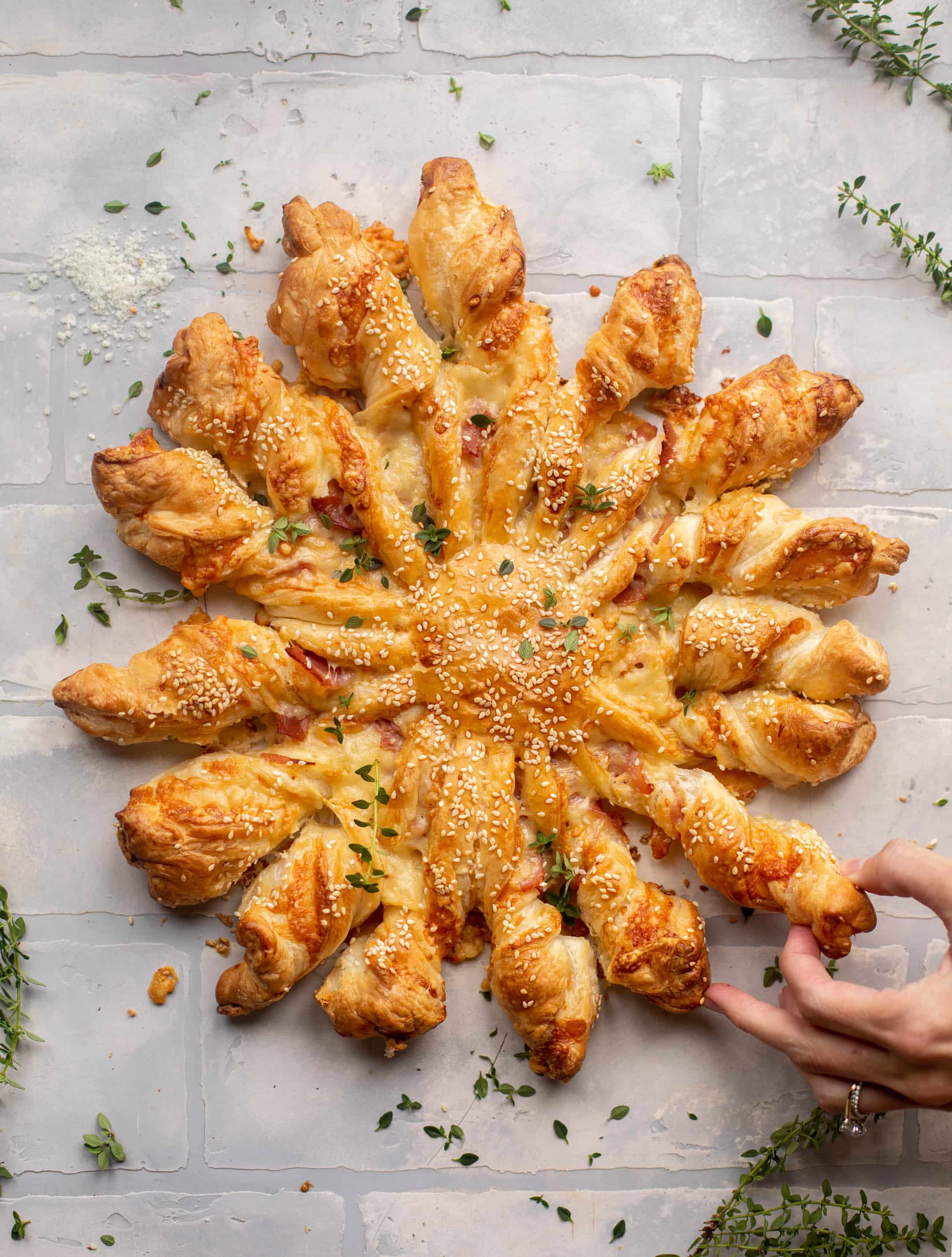 And it only has FIVE ingredients. Yes five! If we could get this to magically appear in the kitchen every weekend from now until January, that would be GREAT.

It’s not too much to ask, right? These flaky layers filled with ham and melty swiss cheese are twisted and baked until golden and puffy and so crisp. Sprinkled with toasted sesame seeds, they are crunchy and crisp but soft and cheesy at the same time. A little bite of heaven! See…I have a little obsession with the ham and swiss croissant from starbucks. I mean, it’s not like it’s the best croissant I’ve ever had or anything. Not really close. But when warm, it’s so flaky, crisp, cheesy and really great in a pinch. It’s also very satisfying and filling! Occasionally I will grab one on the go and the kids really love it too.

The combination is a classic. I have never loved deli meat, but if it’s warmed in such a way that it gets crisp and crunchy in places? I like it a lot. That’s what happens here! The cheese gets melty and warm, the ham edges get crispy and the puff pastry practically melts in your mouth. You may remember a few years ago when I made these spinach artichoke puff pastry twists. They are SO GOOD!! The star twist is easier to make than it looks, it’s super delicious and so pretty to look at. It looks so much fancier than it is!

That’s one of the reasons I really love this. Because it’s just so pretty. While that version is very much an appetizer and geared more towards later in the day, this one is not. Of course, it would be perfectly fine during happy hour or a holiday party, but what I really love about it is that it’s great for holiday brunch. Or even breakfast. Maybe even christmas morning breakfast!

It is so easy to prep ahead and you can actually assemble it ahead of time. This is how it comes together!

My favorite puff pastry versions are the ones that come in a big sheet. This recipe uses two sheets, so make sure you have two! I take a big plate and cut out a circle in the center of the sheets. As big as they can get.

Top one of the circles with slices of ham and freshly grated swiss or gruyere cheese. Top it with the other puff pastry circle.

Then it’s time to cut! Use a biscuit cutter to cut a whole in the center but DON’T go the entire way through. Then use a knife to cut strips in the circle about one inch in size. Twist the pieces you slice! It will get a little messy and is totally fine if cheese spills out and the ham pieces rip. This is the best because both will get crispy in the oven.

You can do all of that ahead of time and store it on a baking sheet in the fridge. It’s the best!

Before baking, I brush the entire thing with egg wash. Then sprinkle all over with sesame seeds.

Bake it for 25 minutes or so and you’re done. Golden, puffed buttery pastry with lots of ham and cheese. So much flavor! 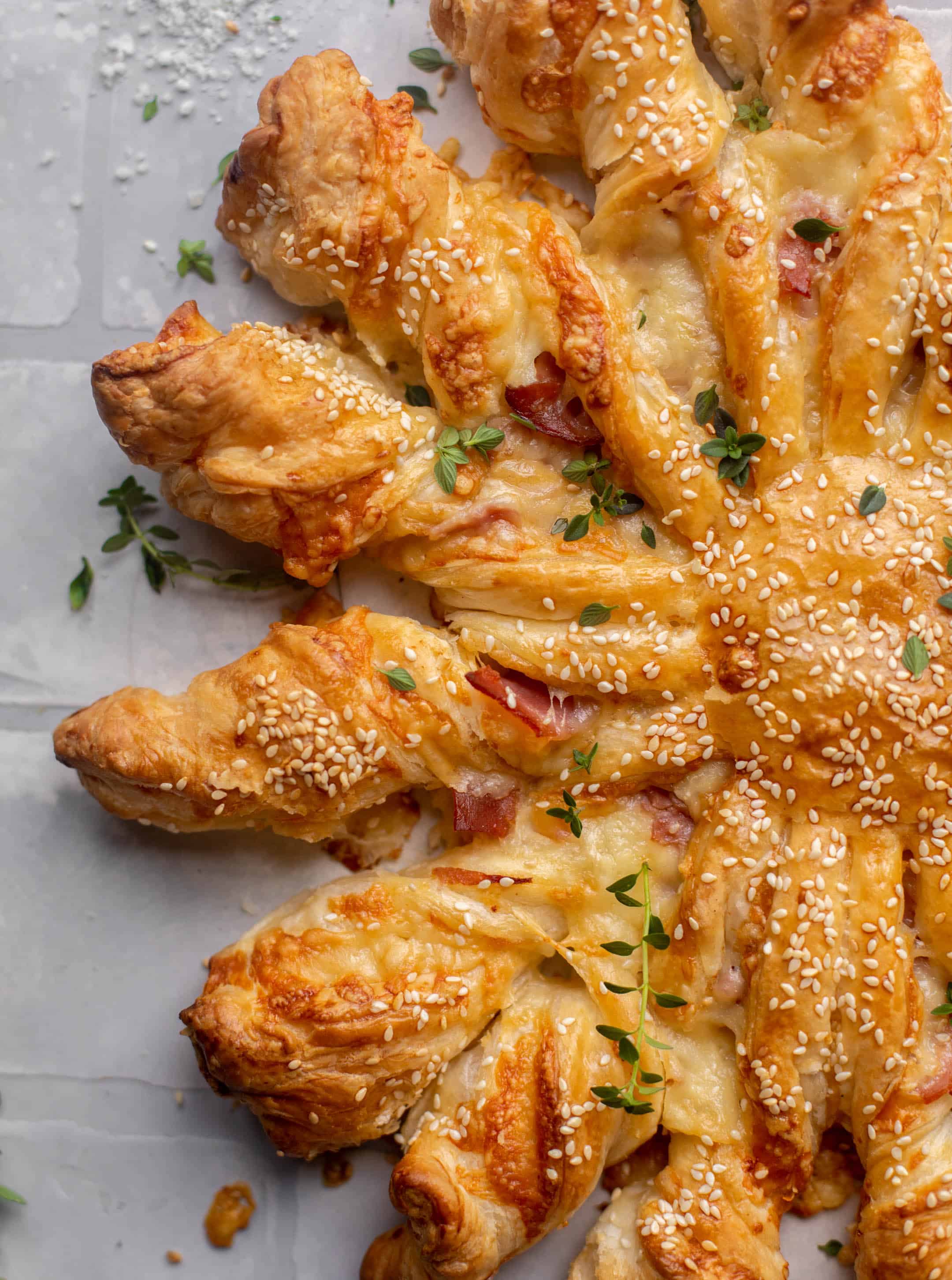 And that’s how this easy treat happens. Put it on your list! 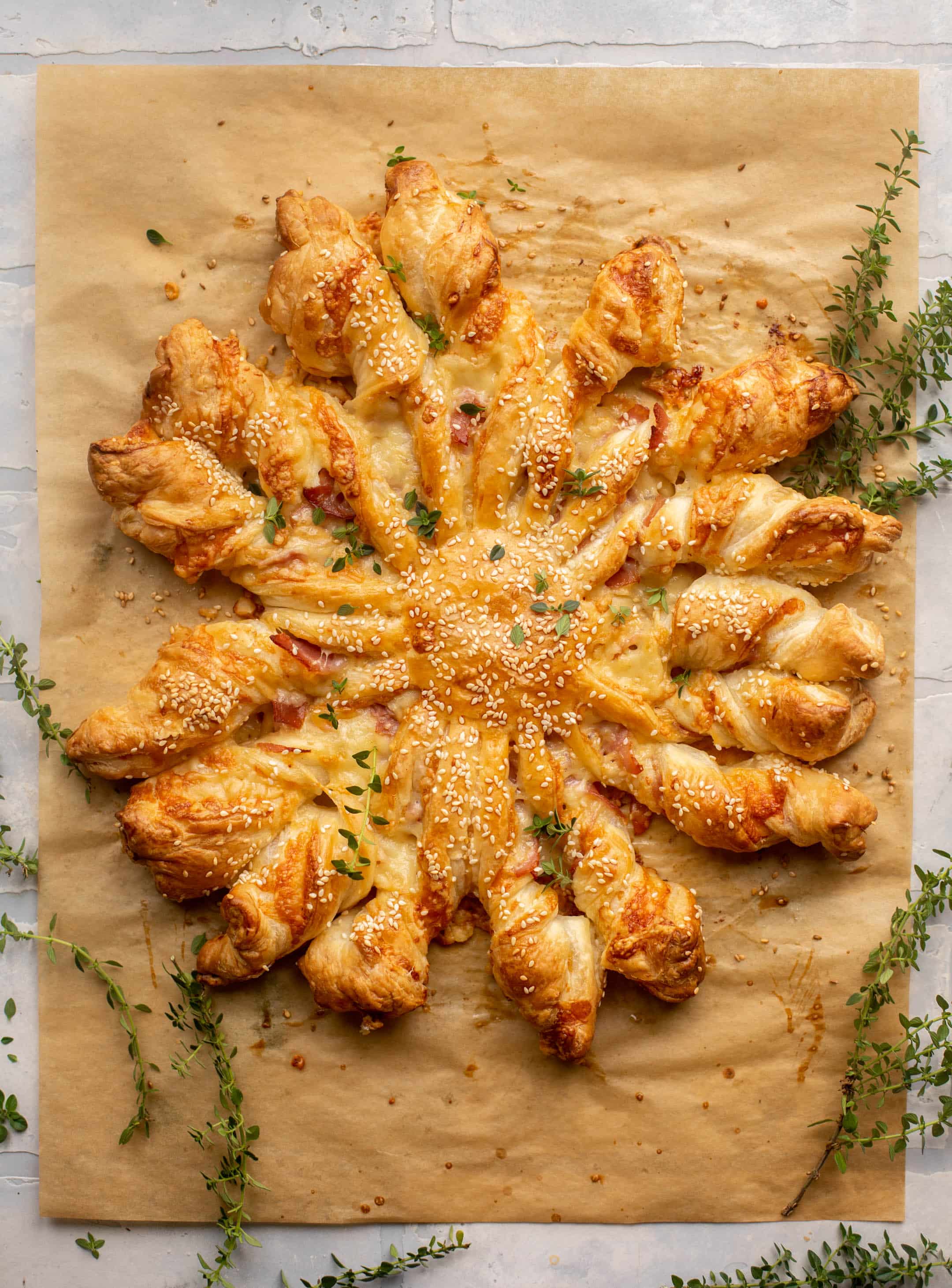 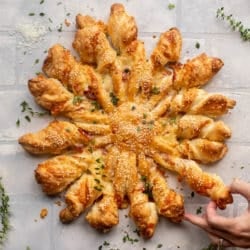 Prep Time: 15 mins
Cook Time: 25 mins
Total Time: 40 mins
This ham and swiss puff pastry is twisted into a beautiful holiday star and such a delicious crowd-pleasing appetizer! Melty cheese and crispy ham are layered with the buttery, flaky pastry and baked until golden. This is so good!
Print Recipe Pin Recipe
5 from 21 votes
Leave a Review » 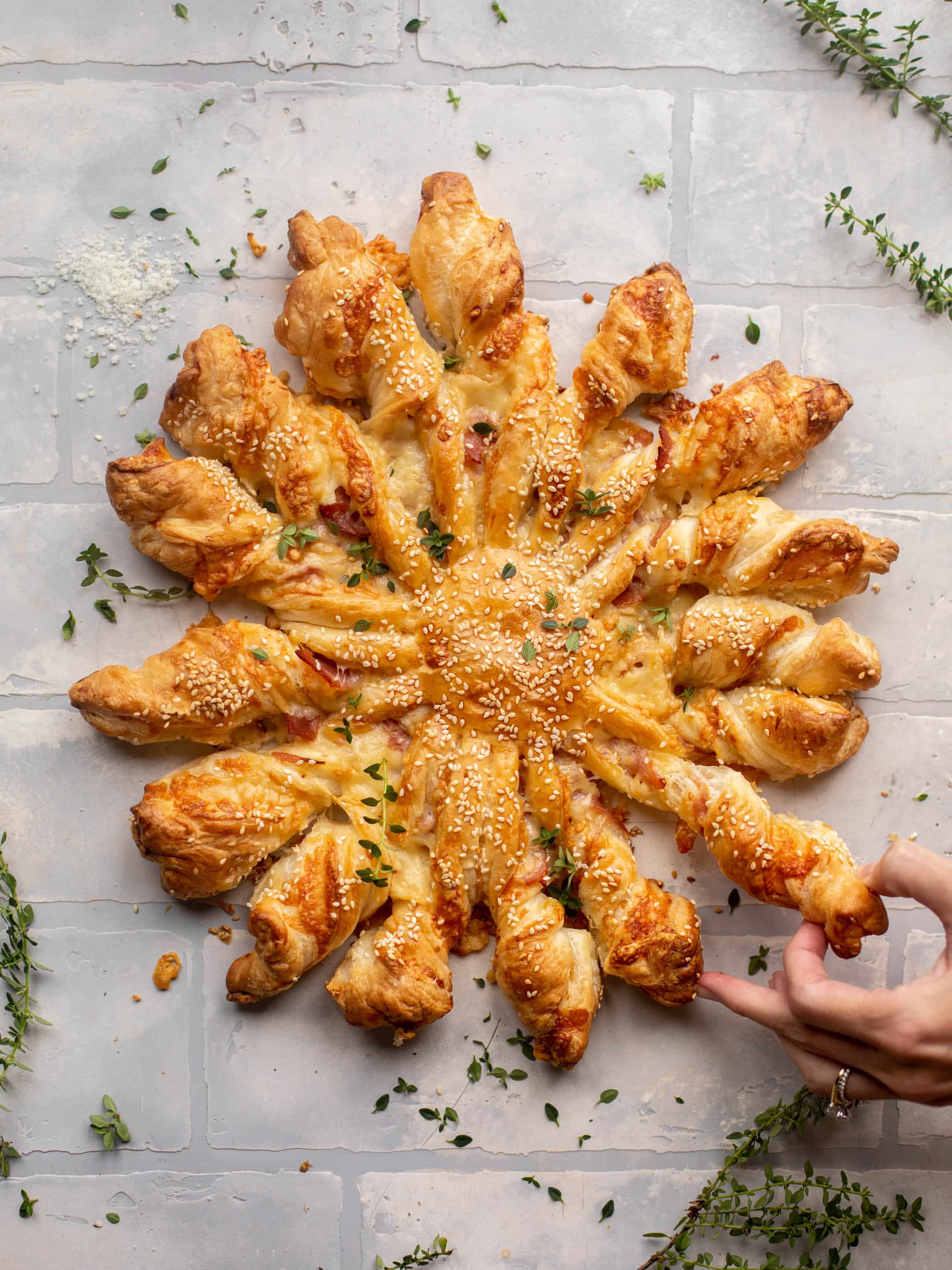 Could eat it everyday.