Yesterday I got an intense craving for tortilla soup. It was my first attempt at making it, and to ensure that it would be delicious, I added a big spoonful of sour cream. Because cream makes everything better. Last night Mr. How Sweet asked me if this was made with low-fat heavy cream. Oxymoron, much?
Tortilla soup is one of my all-time favorite soups. It’s warm with a kick, and topped with melty cheese and crispy tortilla strips. It’s tastes like an enchilada in a bowl. Do you know who else loved tortilla soup? Mother Lovett.

Except she called it “tor-rillo” soup, pronounced exactly as it’s spelled. As in, “ehh… are you going to the store? Get me some of that torrillo soup. Put it in a big white hickey, not a little one.”

For the record, said “hickey” was a plastic container from the hot bar. I like to throw a few tortilla strips into each bowl of soup, as well as garnish it with toasted whole wheat tortillas. It’s easier, healthier, and quicker than frying tortillas. And it is still delicious. It adds a crispy, crunchy texture that is mandatory for my soup sanity. 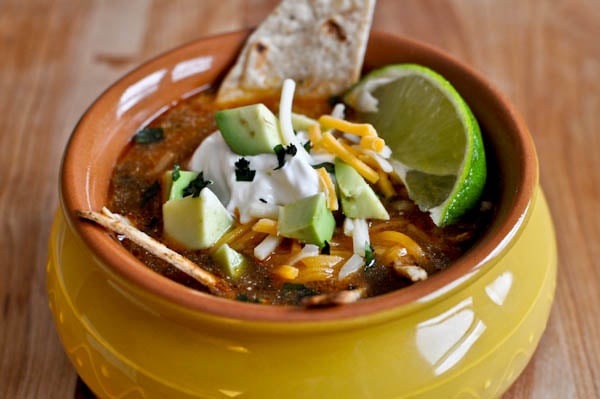 The best part about this soup? It was fast and simple.

Everything went into one pot and was done within 30 minutes. Just like the chicken chickpea soup! I considered adding blacks beans to this dish, but I didn’t think Mr. How Sweet would want to ride that train. It certainly didn’t taste like it was only simmered for 30 minutes- the flavors were quite complex and layered. Next time I’m throwing in the beans. I wonder what it means when you eat more toppings than soup. Or when you continually pile on toppings until you are finishing slurping up broth.
I’m sure my jeans will tell me this afternoon after I’m forced to paint them on. 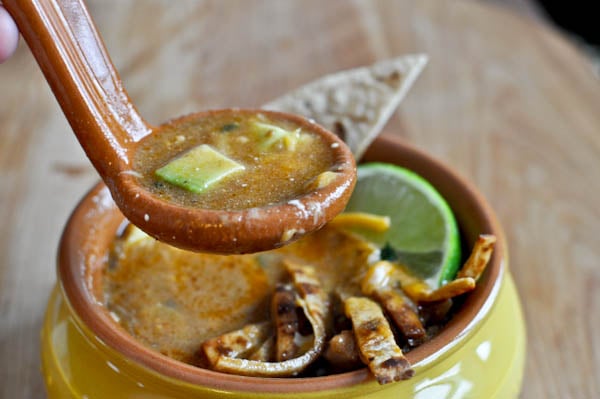 4 ounce can of green chilis

fresh cilantro
In a large pot add olive oil and heat on medium heat. Add onion and pepper and saute until soft, about 5 minutes. Add garlic and sprinkle in cumin and cayenne and stir. If using chicken, cut into small chunks, season with salt and pepper, and add to onions and peppers. Brown on each side, about 8 minutes total. You can also use pre-cooked, shredded chicken and add it in at this time, just proceed to the next step.

Pour in chicken stock, chilis and enchilada sauce. Bring to a boil, reduce and simmer for 30 minutes (or longer if you want). Right before serving, stir in sour cream. Serve with tortilla strips, avocado, cheese, sour cream and lime.