I know I tell you to make things all the time. That’s basically what we do here, right? I tell you, every single day, to make whatever it is I’ve taken way too many pictures of and promise that it’s the best thing you’ll ever eat. And blah blah this-is-what-I-did-yesterday blah.

Yes. I do that sometimes. It’s fairly absurd, considering I’d never share something with you that I didn’t love or think you should make righthissecond. But if I didn’t chatter away here I’d have to actually talk to real live people in my real live life and tell them in less that 654 words why this brownie slash penne slash salad is the best thing I’ve ever made. So there’s that. Oh! Just kidding though. We all know I would never consider a salad the best thing I’ve ever made. Hardy har har. But this time is different, I swear.

This… you just need to make this. Obviously. See, the thing is that I really don’t like almond butter. Like, at all. I think it’s disgusting, tasteless, and just gross. Not my thing. Too boring? Too savory? Maybe it’s because my teeth are so inexplicably sweet that I can barely handle something that doesn’t include butter or cheese or chocolate. Maybe it’s the result of one too many swipes in the Jif jar as a child. Maybe it’s because I really just like my own homemade versions and haven’t found one to compare. Maybe it’s because I only like to eat my almonds when covered in chocolate. 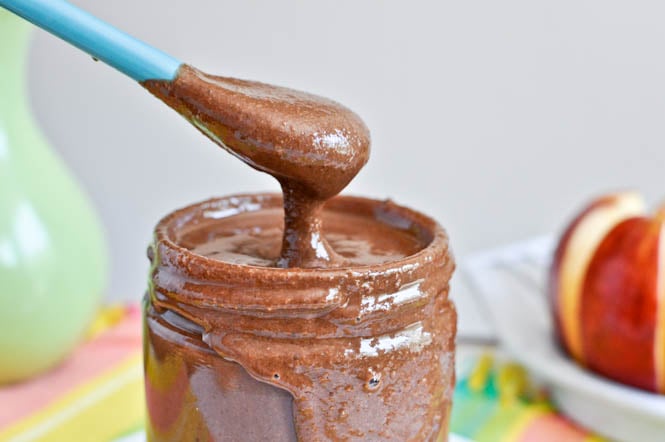 Initially I decided to make chocolate coconut peanut butter, but then I considered my options and remembered how much I adore macaroons – with their slightly crispy outside and sweet, gooey inside – made especially decadent with a quarter chocolate dipped. I could easily plow through a dozen macaroons in one sitting. Chocolate coconut: 100 points. Self control: negative 500 points.

To top things off? This almond butter is the epitome of versatility. Yesterday I had it with an apple for a snack. And after dinner, I had about 43 spoonfuls for dessert. Today I plan on spreading it on toast. I’ll probably add it to a smoothie at some point. And I might even cover broccoli with it. At the least I’ll probably lick some nutrients off the stalks. Yield: 1 and 1/4 cups
Print Recipe Pin Recipe
No ratings yet
Leave a Review » So what do you think? I say this goes to the top of your to-do list. It’s almost as important as breathing.

« Previous PostTuesday Things… On a Wednesday.
Next Post » All Dogs Go To Heaven.