At 6PM last night, the last thing on my mind were cupcakes. Until I looked at this bowl of batter.

After a magical food-and-wine filled weekend, all I wanted was a normal one-course dinner without 3 forks and 2 spoons. Since I was staying near the airport to gain easy access to my flight this morning, I dragged myself to the nearest restaurant and plopped down in the booth.

I ordered, I ate and I even declined the dessert menu because surely nothing was going to taste as incredible as the vanilla bean panna cotta I ate twice this weekend. Then I reached for my wallet.

But all I found in my purse was four lip glosses, a few hair-brush fur balls, makeup removing face wipes and like six hundred unorganized receipts. That does not a wallet make. Uh… what? I was at dinner alone, in a city I’ve never been, with a fully cleaned plate, a 16-year old going on 12-year old server, and an absence of all credit cards and cash. Surely things could have been worse, but I tend to be a bit of a dramatic snot and began to panic.

So I asked if I could see the dessert menu.

Surprisingly I wasn’t fretting over my wallet… I knew for sure that it was in my hotel room [sitting pretty on this really gross orange leather couch that I’m currently staring at – yeah]… the hotel room that I had to blindly walk four blocks to with a 50+ pound suitcase and two carry on bags after the driver dropped me off at the wrong hotel, then left. You know… that hotel. I ordered some banana cream pie to go, and when my server brought me a square of styrofoam, I asked if he could also bring me some chocolate cheesecake. I needed to be sure to have the Rolls Royce of dessert take-out considering this was my only plan for collateral. After getting the check, I looked him straight in the eye and was all, “I know you don’t believe me but I seriously left my wallet in my hotel room. You can search me, search my purse, keep my dessert, just please let me run over and get it, and I promise I’ll be back with a big tip for you.” He just sort of stared at me.

I left. I ran. I demagnetized my seventh (not even exaggerating) hotel key of the weekend and got an eighth, grabbed my wallet from it’s orange perch, ran back, paid his wide eyes since he assumed I was a goner, then came back to my hotel with two giant containers of dessert. I opened the boxes to see two stereotypical I-pulled-these-out-of-the-freezer-three-hours-ago-and-defrosted-them-next-to-the-frozen-chicken-fingers slices of dessert, which immediately made me want to cry after eating such incredible treats this weekend. Nothing is more disappointing than flash frozen fake dessert. So that’s my story. It has nothing to do with these fluffernutter cupcakes, which oddly enough I came home and made after our seven course dinner last Friday night. Something about large quantities of food lends me crazy inspiration. We ate them for dessert after our game-day meatballs, and I really did forget how much I loved them until I saw the first batter picture up there. It is quite possible I consumed more cupcakes in batter form than in cake form. 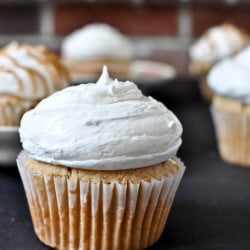 Cream butter and peanut butter together in the bowl of an electric mixer until smooth and creamy. Add sugar and eggs and beat together until fluffy. Add vanilla and mix for another minute or so.

Pour into cupcake tins and fill 2/3 of the way full. Bake for 15-18 minutes at 350. Let cool completely before frosting.

Note: since the marshmallow fluff can harden a bit, I would advise making these cupcakes the same day you eat them.

Beat butter and peanut butter in the bowl of an electric mixer until creamy. Add in vanilla extract, then with the mixer on low speed, add in powdered sugar. Increase speed to medium-high and beat for 2-3 minutes until fully combined, scraping down the sides. If frosting is too thick, add in milk and beat for 1-2 minutes more. Fill a pastry bag with frosting or using a spoon, poke a hole into the cupcake and fill.

Beat butter in the bowl of electric mixer until creamy. Add in fluff and beat for 2-3 minutes, then add in vanilla extract. With the mixer on low speed, add in powdered sugar 1 cup at a time until fully incorporated. Once all the sugar has been added, beat on medium-high speed for 2-3 minutes. If mixture if too runny, add a bit more sugar. If it’s too thick, add a bit of milk one tablespoon at a time. Frost cupcakes and drizzle with melted peanut butter if desired.

[adapted from my peanut butter cupcakes] It should be illegal for me to buy marshmallow fluff. Seriously.