Your stuffing needs two kinds of bread next Thursday. Dos.

Because I am almost absolutely 100% positively sure that you won’t have enough carbs, sugar, bread, starch and carbs on your Thanksgiving table.

Just tell me that isn’t true. This stuffing would make my mom cry. It’s quite untraditional and stuff… you know. No celery (blah). For months I’ve wanted to make stuffing with sourdough bread. Months, I tell you. I LOVE sourdough. It’s so… sour. And I couldn’t want to make it. !!!

But… when I mentioned it… to that guy I live with… he says “Oh. ?  I really thought maybe… you know, you’d make some cornbread stuffing this year…or something… I’ve always wanted to try that.” Oye. Sidebar: Don’t mind this almost burnt brown… err, black… butter. It’s not burnt. I swear. I might have dipped a spoon in and ATE IT to check. Maybe. Sorta. Definitely. 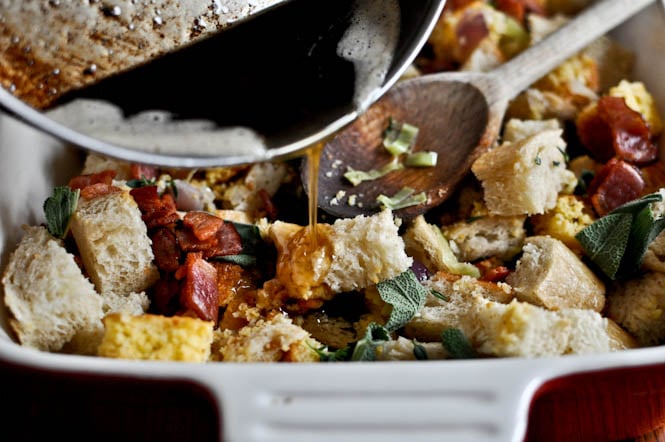 Since when do 5-year old palates determine the meals in this house? Where are these suggestions when I’m stumped stupid for dinner ideas on Monday nights? Where did you even LEARN about cornbread stuffing?! FYI: Cornbread stuffing does NOT have chicken in it. !!! Do you know this?

I already had the sourdough bread. I planned ahead. I bought it. It took everything in my SOUL not to eat it.  You guys… seriously. While I would have been perfectly content taking down that loaf toasted with eggs, toasted with bacon and lettuce and not tomato, toasted with garlic and parmesan then cubed… and toasted as croutons for the salad I’d never eat… I took one for the team and hurriedly made a batch of cornbread. I was going somewhere I’d never gone before. This kept me up at night. I literally had to take Nyquil to fall asleep because bedtime was not happening with bacon and bread(s) and brown butters and other b things on the brain. After the four episodes of Friends and the two attempts at painting glittery gradients on my nails, the only thing weighing my eyelids down was the fact that I suck at nail art and will never have a house as clean as Monica Gellar’s.

We have been devouring it since Monday and can’t.get.enough. I live for stuffing. The flavor is outrageous. Outrageous… believe it.

I’d love to tell you that this will grace our Thanksgiving table next week, but the fact is that I spent a good four hours already trying to convince my mom that butternut lasagna is where it’s at (!) even if I’m the only one who eats the entire dish that night… and if the stuffing is changed up I’m pretty sure she’ll fly off the handle.

So here it is… Some of the cornbread gets crumbly and some of it stays cubed and there are still sour bites and everything is daaaa-renched in brown butter but then toasted and stuffed in a little bed with crispy bacon squares and it’s smoky but sweet and crusty but soft and… and… ah. Yeah. Note: If you want to stuff the bird with this, skip the stock drizzle over the bread (keep the butter), fold everything together and then stuff.
Course: Side Dish
Cuisine: American