I mean… I made a cake with bacon fat. If that wasn’t on my bucket list I don’t know what is. 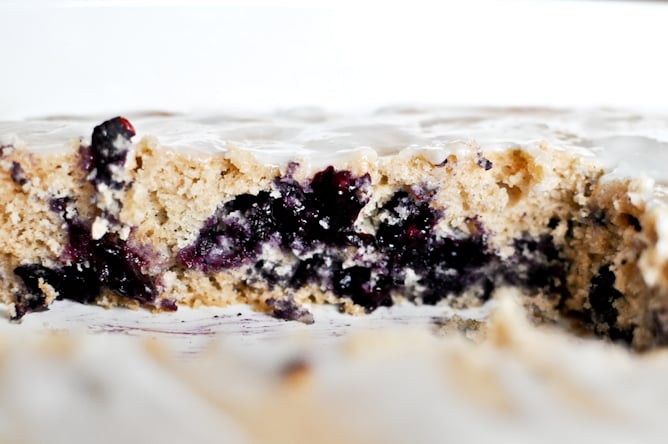 We’re moving a little backwards here, what with dinner yesterday and breakfast today and then tomorrow… lunch. Whatever… we’ll get there. But this doesn’t HAVE to be breakfast. It’s totally breakfast slash dessert slash snack slash tax stress out food. I’m pretty sure we all know that little word… *breakfast*… simply makes an appearance so we feel better about ourselves and the fluffy sugar consumed at 7:18 this morning.

Ugh. I just love this so much. So much, in fact, that it’s disgusting. I love it so much that I hate it’s guts. The only thing that could make this whole blueberry bacon experience better was if I was eating it somewhere magical. Like a tropical island. Maybe a snowy ski lodge with a fireplace roaring. Probably not in a bikini in June. Or most definitely… Target. It’s a major secret of mine to wish to be locked inside Target overnight… a la Joey and Pacey in K-Mart circa 2003. Granted I’d want more than 12 hours to be surrounded by the multitude of beauty products, magazines, movies, food, scooters, bikes and all that crazy choxie chocolate stuff… but it’s a start.

Totally Team Pacey for life by the way. For LIFE. 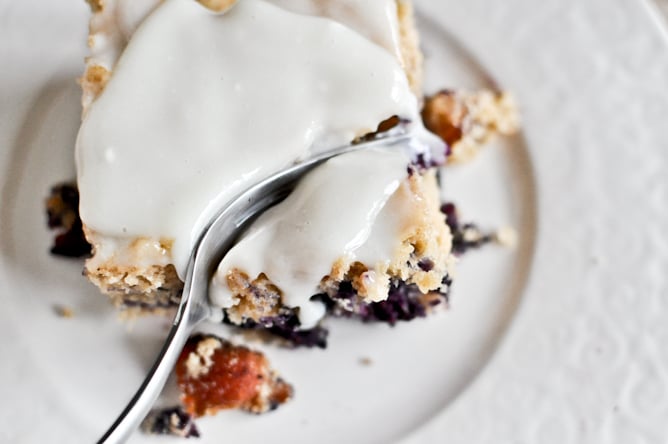 The cake itself is nothing special – similar to your regular ol’ coffee cake cut into your typical square – but this time it’s laced with tons of bursting blueberries and super crunchy, salty bacon. With a little cinnamon and vanilla swirled in there too. And topped with a cream cheese glaze because, well… can I ever leave well enough alone?

I’m sure you know the answer to that. It just completely WORKS. It’s like eating fat blueberry pancakes with a side of bacon. Except your bacon is like, on top of the pancakes. Or sandwiched in between. Because I know you’ve done that before… come on! [adapted from my eggnog crumble cake]

Heat a large skillet over medium-high heat and add bacon. Fry until completely crisp and fat is rendered. Remove bacon and place on a paper towel to drain, reserving 2 tablespoons of the bacon fat.

In a large bowl, whisk butter and bacon fat with sugar until combined. Whisk in eggs until completely smooth, then whisk in vanilla extract. Slowly add dry ingredients, mixing with a large spoon. Add in milk and stir until combined. Toss blueberries with 1-2 tablespoons of flour. Fold in bacon and blueberries, then pour batter into a greased 9 x 13 baking dish. Bake for 30-33 minutes, or until golden on the sides and top. Remove cake and poke holes on top with a toothpick. Pour glaze over top, reserving a bit extra for topping if desired.