That’s what these are… big picture cupcakes.

As in, make-these-for-someone-you-really-really-REALLY-like big picture cupcakes. Or like… try to think about the big picture when you stop to pump gas into your car, decide to do a good deed for yourself and throw away some random gum wrappers, water bottles, receipts and um, the remnants of about 16 granola bars while you’re fueling up and then proceed to THROW YOUR CAR KEY into the trash can along with everything else. The trash can at the gas station. Only one of the dirtiest places on Earth.

But don’t worry… try to think big picture. This is just a blip on the radar. At least that’s what my husband told me yesterday, when I said that I absolutely NEEDED this purse that was on sale, but I feel like I shouldn’t buy it, and did he think I should buy it and he goes “uh, you already have that purse in a different color… ?” and I mentally curse myselft for marrying someone metrosexual. Well, as metrosexual as you can get with cutting all the sleeves off your NASCAR t-shirts, but still. I responded that duh, I WAAAAAS thinking big picture… like dreaming about how cute this purse would look in July and August which is sooo far away, and even how next year it will still be in style and didn’t he know that this is majorly big picture thinking?

I guess that’s not what he had in mind. Hmmpf.

Too bad we made the best move ever post marriage… which included never combining our bank accounts and remaining independent. Worst move ever: not living together before. Can you say drop down drag out fights? These cupcakes ARE big picture cupcakes though. They are one of those cupcakes that you remember. One that you crave. One that becomes a staple, especially when you can make 24 of them and keep them in your freezer and then eat one with extra peanut butter chocolate ganache for dinner.

[But really my dinner last night was sourdough pretzels dipped in crazy feta… with a side of peanut butter chocolate ganache. But who cares?] 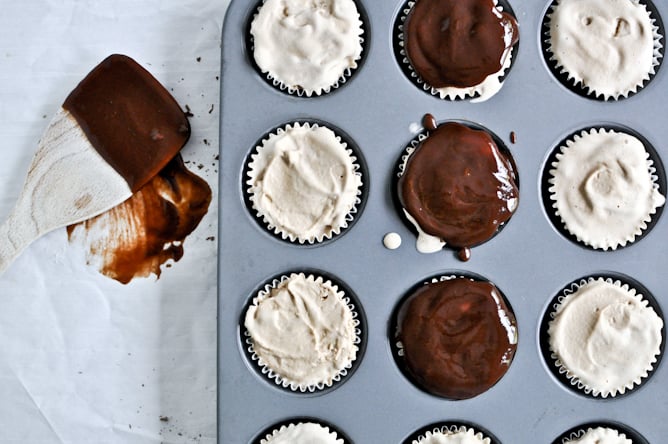 It’s no secret that I loath all things coffee (uh, hello dirty water) EXCEPT for coffee ice cream. It became my mission in life to make all coffee-like drinks taste identical to coffee ice cream, which has been fabulous and horrible all rolled into one because then I can’t stop consuming them and I feel like I’m on speed. And I talk a lot.

I like to think that I inherited my coffee ice cream fascination from my grandparents, who always had a half gallon in their freezer. Unlike me though, they were able to consume it in normal-sized portions, like a little cup here and a little taste there. Not like a large spoon before breakfast and a soup-bowl’s worth for dessert. Then Cold Stone appeared, and they flaunted this creation called mud pie mojo in my face, complete with coffee ice cream, fudge, Oreos and peanut butter mashed into one. I mean, they practically forced it down my throat. For die-hard coffee fans the combination may sound heinous, but it truly just WORKS. And that’s how we ended up here.

Obviously these cupcakes take a bit more work than boring regular mini cakes – you need the time and patience for a few easy steps as well as the space in your freezer to store these little chunks o’ love – but I promise they are 100% worth it.

They take away all your worries of the big picture. Because what else do you need besides cupcakes?* 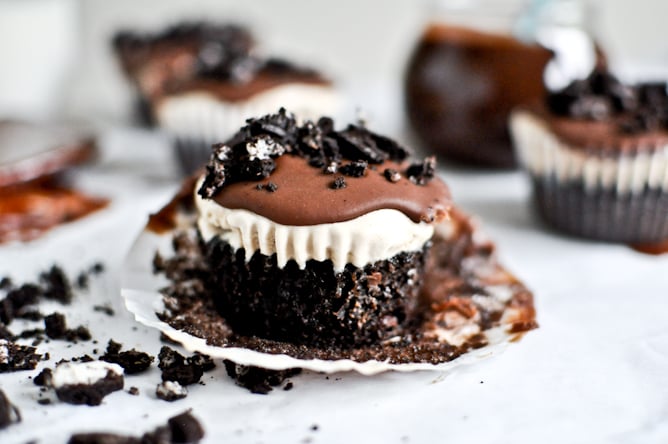 In a bowl, whisk egg and sugar until smooth and no lumps remain. Add milk, cream, butter and vanilla, and mix until combined. Sift dry ingredients together and add to wet mixture. Mix until batter is smooth, then fold in chocolate chips. Line a muffin tin with liners and spoon 2-2 1/2 tablespoons of batter into each cup. Bake for 8-10 minutes. Let cool completely – or stick in the freezer to cool even quicker.

Using a spoon, quickly but somewhat neatly spread ice cream on top of cupcakes and into a little mound. Repeat with remaining cakes and freeze for at least 1-2 hours. Once ganache has been made and slightly cooled, remove cupcake from freezer and spoon ganache over top of each quickly, immediately topping with a sprinkle of cookies. Freeze for another 30 minutes then serve!

Heat the heavy cream in a saucepan over medium heat, just until bubbles form on the sides. Remove from heat and stir in chocolate  and peanut butter, continuously stirring until ganache is smooth and comes together. Let cool for 10-15 minutes before spooning on cupcakes. *I mean besides fancy shoes.