I feel like I’m committing a major sin or something. I mean… cake, bananas, chocolate, frosting… bourbon. What the what.

Though I bet you’re not that surprised since I trash up desserts and well, food in general, any chance I can. It’s my favorite thing to do by far. Yeah. So let’s be honest. This cupcake is sort of a mess. It’s a banana cupcake with chocolate chips, topped with bourbon buttercream, dipped in chocolate bourbon ganache. I just kept adding junk on top. I couldn’t help it.

This is sort of what it looks like when I get dressed in the morning. In attempts to be somewhat trendy and hopefully cute, I continue to add layer after layer until I look like a complete joke and am too embarrassed to go out in public. But then I go out in public anyway and just relish in my humiliation of way-too-neon accessories.

And the end result is no where near as wonderful as bananas and bourbon and chocolate and cake and frosting and gluttony. Oh well. Oh and those things on top are just some crushed toffee pieces that I added because I am obnoxious. 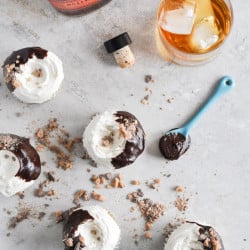 You should probably do this.