This is a story all about how I put giant chocolate chip cookies into a blender. With homemade Bailey’s.

Again. Because it wasn’t too long ago that I did nearly the same thing… again. With kahlua. It’s just that… I made the homemade irish cream over the holidays and obviously when you have a giant pitcher of something like that in your fridge, it calls out to you. I’m serious. Every morning when I opened the fridge and that was the first thing I saw? It was nearly impossible not to guzzle some of it’s deliciousness right there. Merry Christmas to me. But even before I made that elixir of the gods I knew that if I was going to attempt something like that in my kitchen, I would be putting it in these milkshakes. And I thought, wow – how good would some of those brown butter chocolate chip cookies I made be inside of a bailey’s milkshake? phenomenal, right? yessssss.

Then I went to grab some of those brown butter chocolate chip cookies I made and uh, they were gone. Missing, stolen, destroyed… however you want to look at it, they had disappeared. Annnnnd to make matters worse, I think there was, like, six dozen? Maybe?

Anyhoo, I was lucky enough to be making these spiked shakes at noon on a Sunday, which fortunately meant I could pick up some of my favorite chocolate chips ever. Which also probably means I have a whole other host of issues, but whatever. Totally worth it. 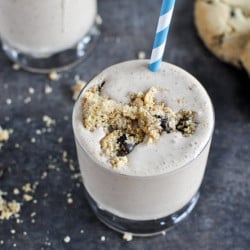