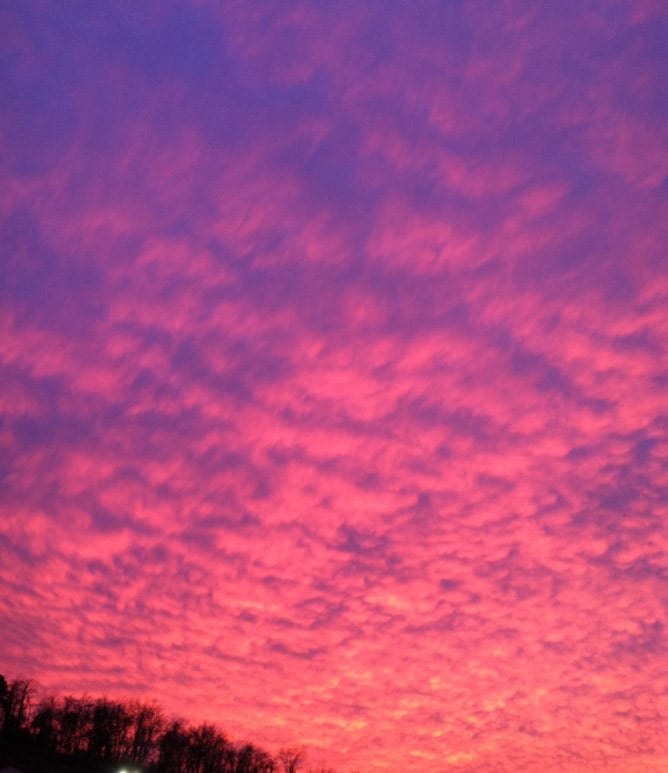 1. Is there anything better than a winter sunset? This is a completely unfiltered, unedited photo taken with my phone last week. I actually watched this sunset in disbelief from my car. I think my jaw was on the floor for a full three or four minutes or, you know, however long it took that sun to set.

2. Oh and I’m pretty sure I’m the only person who, during this deep freeze, demands that the ceiling fan be on while I sleep. I really do.

3. I actually found this week’s Girls episodes to be one of my favorites ever. Ever ever ever. Such a wonderful disaster. Was that even real? Shosanna? I think I am just going to begin all of my phone calls with “how are you, I’m amazing.” Also, by midnight on Sunday I had already watched it three times. I watched it at 9, 10 and 11. My life is so exciting.  (It’s opposite day.)

4. In case you were wondering, my husband still seriously hates the show with the fire of a thousand suns. That probably doesn’t even describe the level of hate. We are talking severe disdain. I mean, on Saturday my brother turned it on and Eddie actually LEFT THE ROOM. It’s kind of hilarious. I warned him to not even watch the Golden Globes last week since it would simply be a Homeland/Girls lovefest. And I was right. And it was incredible.

5. I swear, for the millionth time, that my life doesn’t revolve around TV. Except that… it sort of does.

6. Discovered this new-to-me blog a few days ago and lost myself for two hours inside of it. So pretty. I’m in love.

7. Let’s collectively try this advice on how to get ready at Sephora for free. Especially #5. Every time I leave that store I’m like one giant glitter bomb. At what age is this not appropriate? Because 30 just isn’t working for me.

8. Um… I think I still owe you a NYC eats post from our trip in November? I’m turning into my mother, who has to read “old news.” Doesn’t matter where she is, she must read every and all newspapers even if they are two, three or four weeks old. Wait… what’s a newspaper? Ugh. So 2013.

9. At this point on Tuesday afternoon, I would probably pay someone a ridiculous amount of money to show up at my door with these blood orange bars. And then I would proceed to stare at them like an idiot because they are way to beautiful to eat.

10. Things I’ve made in the last week: the hummus from the Jerusalem cookbook (I just have to say good grief… ridiculous… and I think I lived on warm pita and hummus for four days) and these buffalo chicken french breads, but on this pizza dough and with quadruple the amount of fontina. Obnoxious does not even begin to explain it. What have you made?

11. I’ve had to fast all morning for routine blood work and in true Jessica fashion, I feel like I’m at death’s door and about to starve to death. Don’t worry, I already have two cookies packed up for the minute I get back in the car. Because I am the picture of health.