How are things? How was your weekend? What did you do? Where did you go? Who did you see?

How annoying is that? Enough.

Here are some things I did that you probably don’t care about but I will force feed you anyway. We are such good friends.

I watched the Beyonce HBO special, which I’ve only been waiting to watch for, oh, like the entire three months they’ve been advertising it. I watched her shake her perfect booty while drinking a shamrock shake. At like midnight. Thank goodness calories don’t count on the weekend. Also, I totally drove around blasting the Josh Groban CD and singing along, only realizing once I was pulling into my driveway that “singing along” meant I was belting some slow music with a weird opera-like face because when you sing along to Josh Groban and you don’t have a Josh Groban voice, you look like a cartoon character or a cast member of an SNL skit.

Yesterday I spent 35 minutes fishtail braiding my hair, which is epically pointless because my hair has about five thousand layers. In less than three minutes one entire side of my hair had fallen out of the braid. So I had a braid on one side and… some hair on the other side. Gross. This soup can be in real life though. Wait… can it? With the bourbon? I say yes. I realize I’ve been a bit nuts with the boozy recipes lately, but I promise is happened by accident. Err… sort of by accident. Actually, we moved this bar in our house and before moving it, had to empty the contents to lighten the load. Well, the “contents” sat on my kitchen floor for about two weeks and were a source of constant inspiration. As they should be. Plus, it’s not like I was heavy handed with the bourbon – it’s just a slight pour that adds some additional flavor and cooks off anyway. If you aren’t into it, you can replace it with some additional stock of simply leave it out. But can I tell you? With it? This flavor is unreeeeeal. Since we’re in the circle of trust, I’ll tell you that I am not very gung ho on sweet potatoes. I don’t go nuts over them like some people do. I enjoy them, but tire of them often and considering my favorite food growing up was “potatoes!” (I’m talking like yukon golds and russets), the plain roots will always have a special #1 spot in my heart.

So when I set out to make this bisque, I didn’t have high expectations. It was simply another way to curb my intense soup cravings that creep in come October and peak mid-February. Every week I determine which soul-warming, comforting concoction my soup pot can hold next and this just happened to fit the bill. I kept it simple – as simple as I could with lots of flavor – and with one bite I was SOLD. So much more sold than I ever anticipated.

Do not… I repeat DO NOT let the cinnamon sugared croutons scare you. They aren’t *super* sweet and by just using a few, you add a little sweet to your savory. Unless you’re like me and have no self control and add a boatload of sweet to your savory. This is my life. Oh and it helps if you use grainy, seedy bread. The kind you always see me use is labeled as Harvest Bread in my Whole Foods. It makes my world. 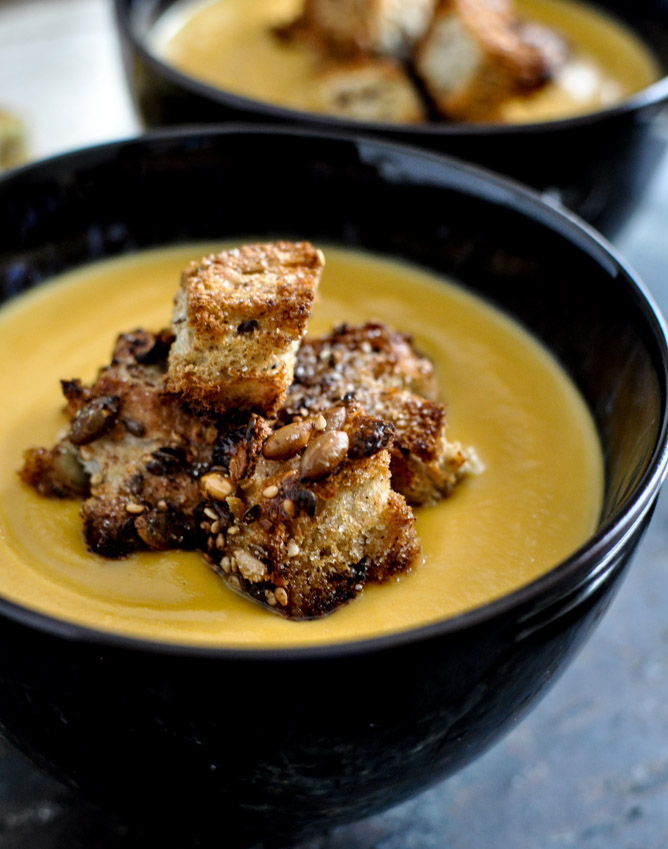