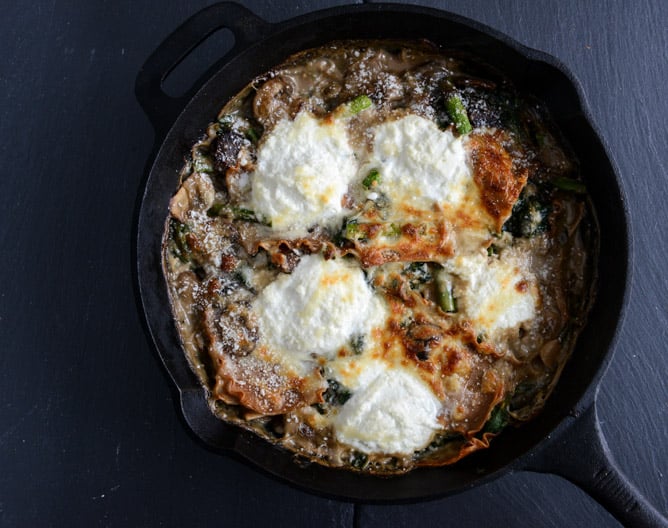 You know how much I adore my skillet lasagna. Lasagnas? Can lasagna be plural?

But! You just throw everything into one skillet – done. It’s one of my most favorite things. Easiest dinner ever.

Who has time to layer noodles and meat and cheese in a dish when there is reality TV trash to watch and magazines to be read and peanut butter filled eggs to eat? Oooh, or should I say coconut filled eggs? Yeah. Coconut filled eggs. Ummmm… please tell me you had some of those over the last few days. My one big plan for the day is to go buy out alllllll the coconut cream filled eggs on clearance. So even though it is still pretty darn cold here, since it is April and Easter has happened, it is freaking SPRING. I don’t care anymore and I’m not waiting for the weather to tell me so either.

I am strung out on mint green and denim jackets. The traditional version is still probably my favorite, though like most things, it totally depends on your food mood. You might remember that back in the fall, I made a butternut squash version but used some chicken to keep the texture lovable. I really wanted to try to do a veggie version (yeah yeah – it’s April Fools, but this is no joke) and figured that asparagus and mushrooms and stuff would give us enough chew and a little crunch. And even for this veggie loather… it did.

Don’t even know myself anymore. 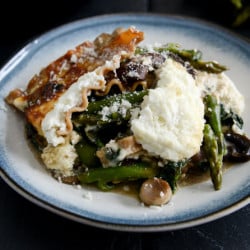 [adapted from my 30 minute skillet lasagna] Bubbly cheese is where it’s at.