Salads are all up in Monday! I don’t mind being cliché when things taste good.

Hi hi hi . How was your weekend? Did you happen to eat a whole plate of burrata and buy four cans of truffle salt at Trader Joe’s like I did? Or maybe you watched Love Actually three times because I certainly didn’t do that. I also didn’t forget that I had on a face mask and tried driving to the grocery store. Something I definitely did was continue my Brussels sprouts binge. If you told me five years ago that I’d be buying these little green nuggets in bulk, I’d have laughed in your face. On Tuesday I asked Eddie if he could stop at the store on his way home and buy five containers of them.

I can’t even fully describe my love for Brussels sprouts right now. It’s like a moth to a flame. Last week, for three days in a row, I ate almost an entire POUND at dinnertime. I’d be all sneaky and prep them for our side dish but I would start early… accidentally on purpose. Which meant that by the time my husband got home, I had devoured spoonful after spoonful of roasted sprouts and then before I knew it, they’d be gone.

I don’t know what that means. I LOVE THEM SO MUCH. And the darn thing is that you wouldn’t even BELIEVE how I have managed to trash them up. I’ve made three Brussels recipes that I can hardly wait to share with you. They’re pretty embarrassing. I’m wondering… is there anything I won’t put Brussels sprouts in? At this point, probably not. My favorite thing about this salad is that it works well when served warm or cold – just depends on your preference. It’s low maintenance. Which is so unlike me. Pears are so perfect and ripe right about now that I left them completely plain, sort of just accompanying the salad. A hint of salt and pepper goes a looooong way when sprinkled on top.

The Brussels are cooked in bacon grease (gah, you should see the mason jar full in my fridge – it’s a collection I’m proud of) then tossed with pure maple syrup and crumbled blue cheese. It’s almost embarrassingly easy to make but the flavors POP. 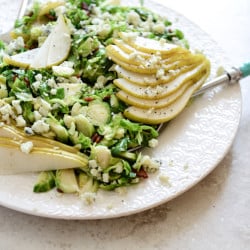 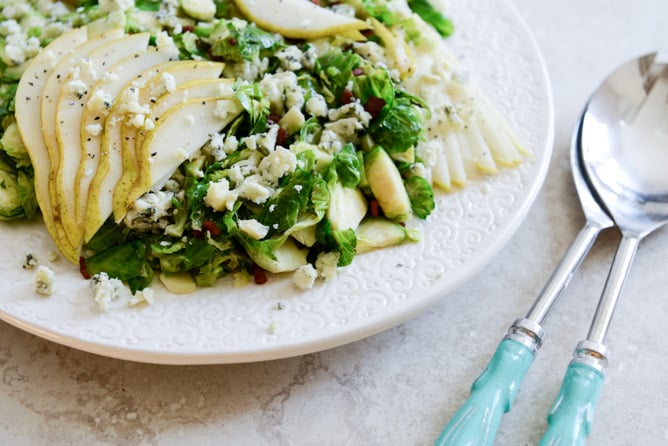