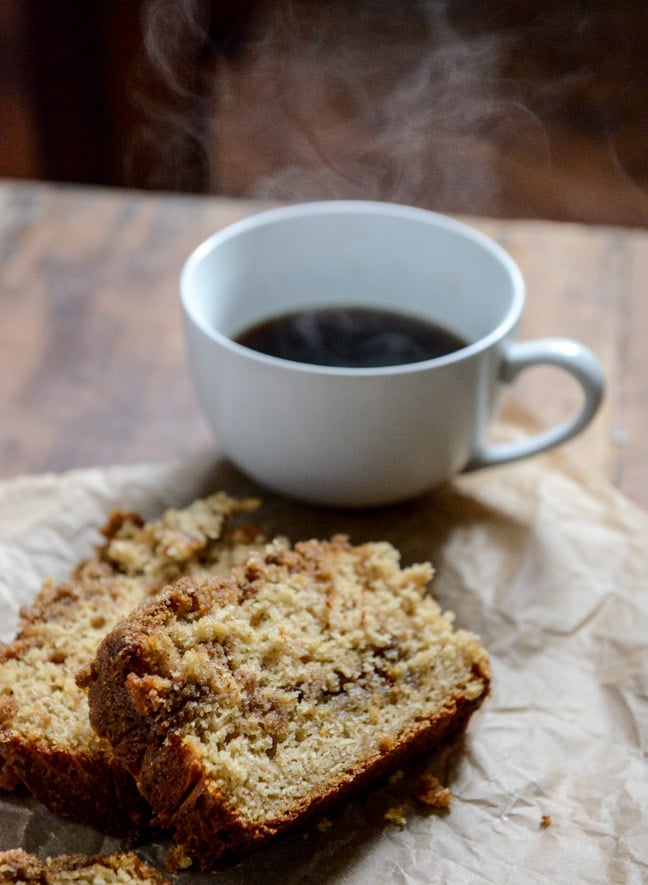 Me, the queen of all things crumbly and streusely, did not like coffee cake.

Obviously, that probably came from my longtime dislike of coffee which changed earlier this year when I began, um… drinking it.

You guys know. I always wanted to drink it so I could be cool, and now I want to not drink it because it makes me feel like a maniac.  I kind of feel like I’m on some sort of drug when I drink it. Almost buzzed like I’m drunk. As in, I’ve actually agreed to do certain things (work things, life things) after a cup of coffee that I normally would not agree to in my pre-coffee days. It makes me all happy and all oh I love everyone! and of course I’ll do this chore/annoying project/favor for you because I just drank coffee and feel like I’m a superhero! No really. This is me every single day. Maybe it’s because I’m still new to the whole coffee thing? I don’t consume much caffeine in any other form. Besides copious amounts of chocolate, that is.

The good news is that I’m finally the girl that can be hipster enough to go to a coffee shop and actually get some version of coffee that resembles real coffee and not just sugar and syrup and whipped cream in a cup.

The bad news is that I’m finally the girl who feels incomplete without that caffeine.

The best news is that my coffee cake is no longer lonely. And even though coffee makes me feel cracked out, I will gladly drink a cup with some cake.

The things we do for love. See, last year I made these whole wheat coffee cake muffins and subsequently talked about how I didn’t really like the cake itself. Almost a year to the day. Things have sort of changed, but not much. Now I love coffee cake in muffin form, but the thing is that I can never (I mean never, ever, ever Taylor Swift style) pass up a quick bread. This cute little cake bread has some pomegranate molasses swirled inside the batter and if you haven’t tried pom molasses, oh oh oh you must. It’s completely different from regular molasses and if you’re a pom freak like me, you’ll just die. It’s a syrupy concoction of sugary pomegranate flavor that has a hint of tartness and is just, well… perfect. It only adds a touch of flavor to this cake, but it’s enough to go… what the heck is in this? You can also totally leave it out if you’d prefer, but since it’s fall and I’ve eaten my weight in pomegranates and slathered more pomegranate body butter on my legs than humanely possible and sprayed pomegranate perfume on my face, I’m living this up.

Ah and we also have the craziest amount of crumbly, crunchy cinnamon streusel here.

Would you expect anything less? Course not. [lightly adapted from taste of home] Eat it for breakfast. I’m making you.