It’s like French toast month on the internets right now. 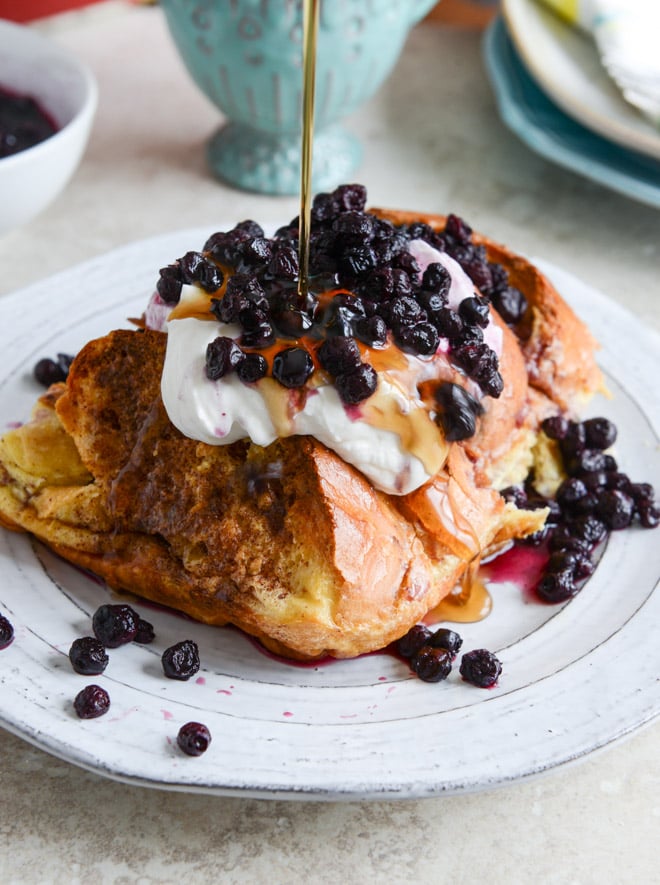 I thought I was being all cool and helpful making some delish French toast to share with my invisible internet friends but it turns out that everyone else is making toast that is French too. Whomp whomp. Add this to your ever-growing list of holiday breakfasts?

To enhance the holiday spirit, I’m watching Home Alone right now and it took me around fifteen minutes to realize that, no, they can’t just call Kevin on their cell phones because there were no cell phones. I remember the days but I barely remember the days. My dad had a car phone back in those days but that was as close as it got.

In 2013, Home Alone would be no biggie and in fact probably be the rave of the century because some kid would text all their friends to come over. I probably would not be invited because my idea of fun is making French toast.

But really. It is. 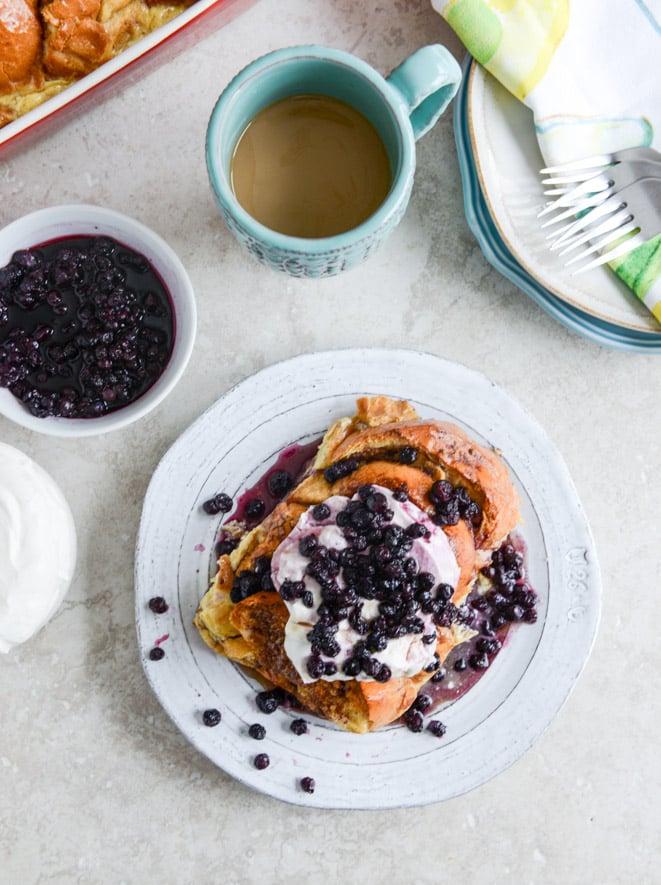 So. You know my obsession with cinnamon sugar toast? Toast that is buttered and covered in cinnamon sugar? No fancy names here. Anyhoo – it is on my list of ultimate life comfort foods. I’ve even been eating it lately with sourdough toast and coconut oil. It’s been my French toast inspo.

P.S. all I really want to scream when I see this title is “I want some fraaaaaaaanch toast.” I need a life that doesn’t include movie lines.

My grandma used to have this little spice shaker guy that held cinnamon sugar. It’s such a vibrant memory in my mind and the moment I crave cinnamon toast, I see that little cartoooned dude in my head. I thoroughly tried to find a picture of said shaker here on the world wide web but it turns out that googling “old school cinnamon shaker” just brings up some cinnamon toast crunch, a few pictures of letterman jackets (what?) and an elderly woman with a bunch of jam. Not helpful google. You can diagnose my elbow pain as a life threatening illness but you can’t find me a spice contraption from a decade or two ago. You’re not right. 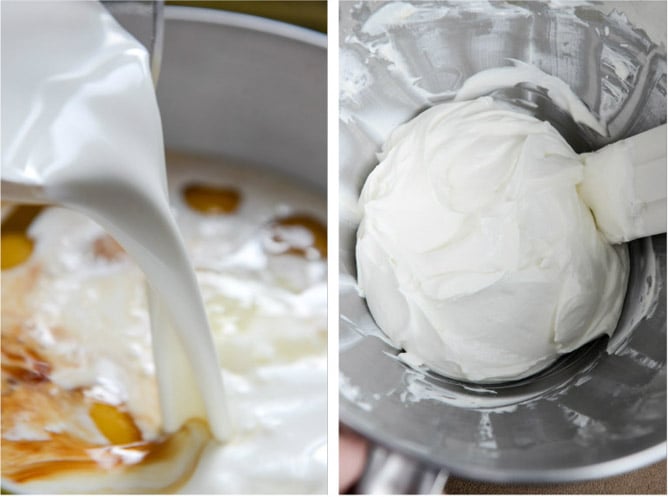 Since I’ve still been consuming my fair share of that toast, I figured why not make a whole French toast casserole out of it? My local grocery store sells sourdough in long, fat loaves. They are the perfect size for a French toast bake and also quench my odd thirst for sourdough bread. I am currently infatuated. I’ve used these loaves for grilled cheese and for things like grilled bread with tomatoes. Can’t stop won’t stop.

All I did was melt some coconut oil and brush it on the bread, then top it with some cinnamon sugar and let it set. The coconut oil kind of made me feel like a grown up (which I certainly am but certainly don’t act like) but if you’re not feeling it, grab the butter my friend. No judgment here.

You should probably eat this on a cold snowy morning with the fire roaring nearby and a massive French press of coffee. I’d like to say do it on Christmas morning and it’s definitely easy enough for that, but hey now, that’s kind of a big commitment. I’m getting a little ahead of myself thinking you’d like to share some of my French toast on one of the biggest holidays of the year.

Plus, all we ever did on Christmas morning was make those orange rolls from a can and eat leftover cookies. So I’m not exactly apt to December breakfasts. It was perfect. It’s going to be a lifelong tradition. 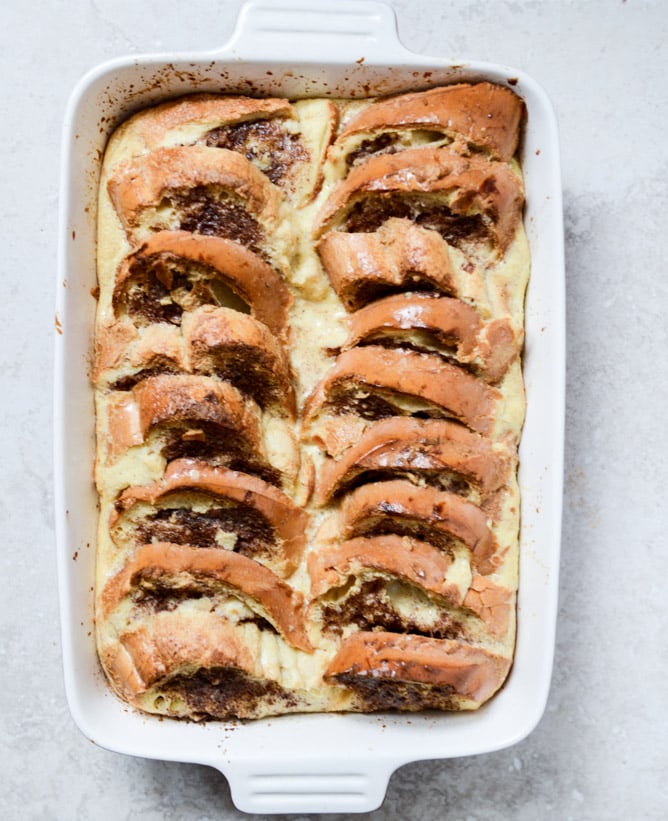 Oh wait. Let me tell you about this yogurt whip. I am HOOKED with a capital everything. I first had this a few months ago when I was in Utah – it was a chobani recipe that consisted of some yogurt, whipping cream and a touch of sugar. It was incredibly fabulous. I love fresh whipped cream but the yogurt makes it a bit heartier, smoother, more satisfying… yes.  It’s almost like a creamy dip of sorts. Better than whipped cream, almost as good as ice cream. Does that make sense? Plus, it’s freaking loaded with protein, which makes this health food! Total health food. Because I said so.

The best part is that you can use whatever yogurt you’d like – full fat or fat free, depending on your preference, along with whatever flavor you’re in the mood for. You can add extracts and make coconut or almond whipped yogurt. Now how about that?

Oh top of my yogurt whip on top of my French toast, I warmed up some Trader Joe’s frozen wild blueberries. Nothing extravagant but super wonderful, especially when the berry juice mixed in with the yogurt. I just love this whole combo. Give me some bacon and my life is complete. Dead serious. Yield: 4 to 6 generously
Print Recipe Pin Recipe
No ratings yet
Leave a Review »

Note: the coconut oil does NOT make this dish taste like coconut. If you’d like to sub something, use melted butter instead.
Course: Breakfast
Cuisine: American 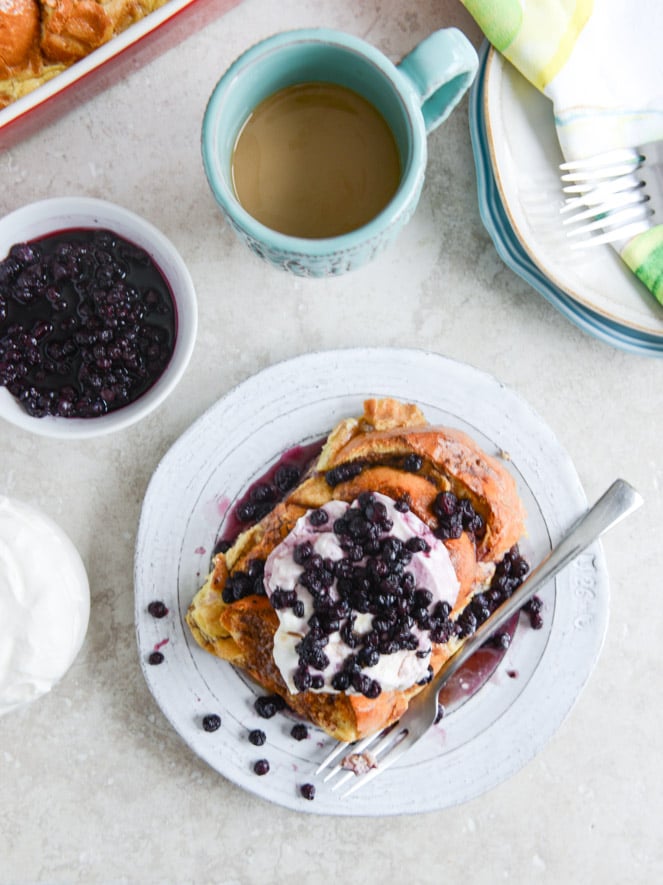 Okay and maybe some chocolate.