Okay. Can we really call these tacos? 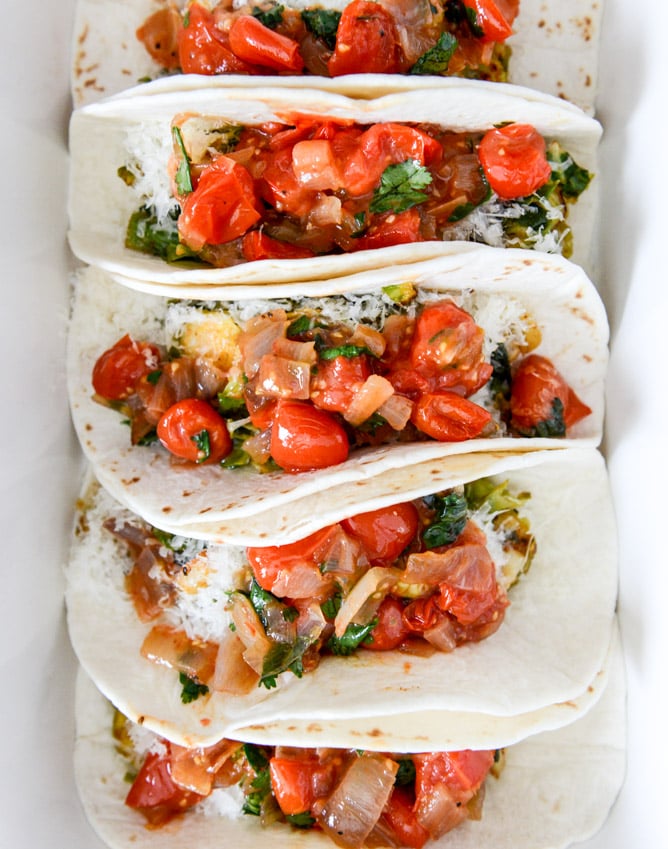 I’m bringing my disturbance of the Brussels sprouts peace right into 2014. Destroying the sanctity of the sprout… one taco at a time.

I might have been wearing a way-too-potent face mask as I was cooking these up because I actually… really loved them. Like really. And I totally did have on a face mask for the first half of cooking, which doesn’t bode so well when your face is hanging out over high heat. 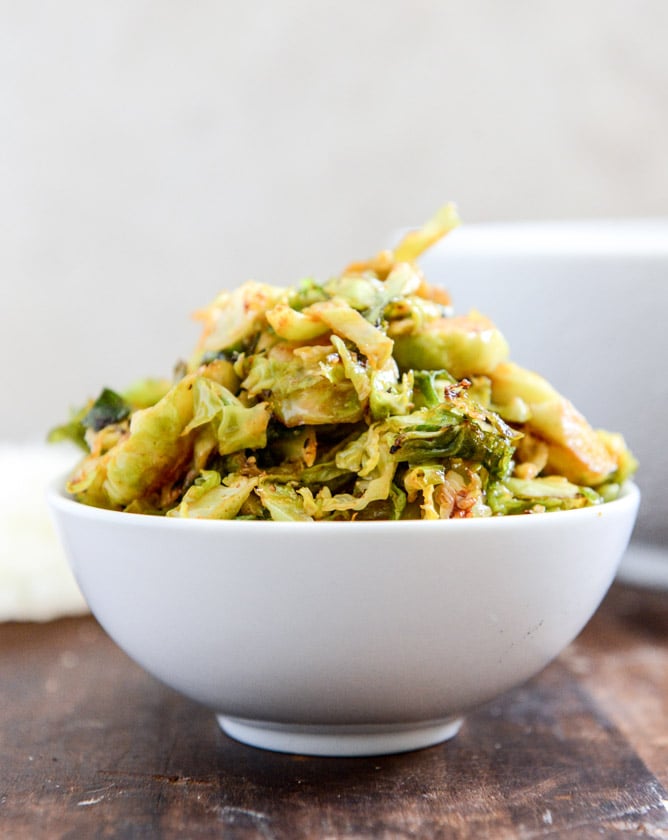 It’s quite possible that the only reason this meal tasted so delicious is because for the last two weeks, my stupid oven has been broken. It’s not the first time and it’s about 800 years old, so when it happened over the holidays (yeah. That was awesome. spent like two hours making two giant pans of enchiladas for people for dinner, homemade from top to bottom, and then went to stick ‘em in the oven that was… cold. life fail.) we immediately went out and bought a new one. They said it would be here in a week, but you know how that goes. In no particular order, these are the things we have been eating for meals since oven apocalypse 2013:

cheese, in every form possible. on toast, with pretzels, dipped in jam. Yeah.

leftover pecan turtles that somehow constitute a meal since “nuts have protein.”

cereal, and by cereal I mean leftover chex from the homemade chex mix I made. Not a fan.

chili that I discovered in the freezer, which may or may not have been from 2012.

the stalest leftover Christmas cookies in all the land.

instant strawberries and cream oatmeal. but I told you that last week. I’m my stereotypical world, I think today REALLY starts 2014. Can I just hashtag my entire life #illstartonmonday? Everyone goes back to work, you resolve to unsubscribe from faux facebook friends (um, can instagram please install this feature?) and you’re determined to keep a cleaner fridge.

Maybe that’s just me. Because it often looks like a bomb went off.

Anyhoo, If I don’t see a plastic container of food for a few weeks, I’ll be thrilled. The idea of sprouts tacos has been floating in my brain for months, which should come as no surprise considering I find a new way to trash them up weekly. But a few days ago I asked you on facebook & twitter if you thought it might be a good idea… and… and… you sorta did. Okay. Well some of you probably thought I’d lost my marbles and others cannot think of a worse combination on the planet. But the majority was overwhelmingly ok! with the idea. So.

I shoved sprouts between a warm tortilla.

I don’t know if I’m ever going back.

I knew all along that I didn’t want to use the Brussels as a shredded topping, like all cabbage-y and what not. I want them IN the tacos, to be the base. A Brussels taco, with other stuff on top.

Sweet and spicy and smoky. Lots of my favorite things. The sprouts inside the taco are shredded and cooked in a bit of olive oil with garlic and smoked paprika. I like to do it over high heat so the sprouts crisp up a bit. Not straight up fried, but a bit crunchy nonetheless.  First layer goes in the tortilla, covered in a fluffy little blanket of grated manchego cheese. I could probably stop there and be happy.

Of course I did not though. Nothing is ever enough.

Before starting the sprouts, I began caramelizing a few shallots and roasting grape tomatoes. Combined with some salt, pepper and cilantro (if you dig it), it’s the coolest little salsa this side of the (my?) internet. I’m eating the leftovers on everything. 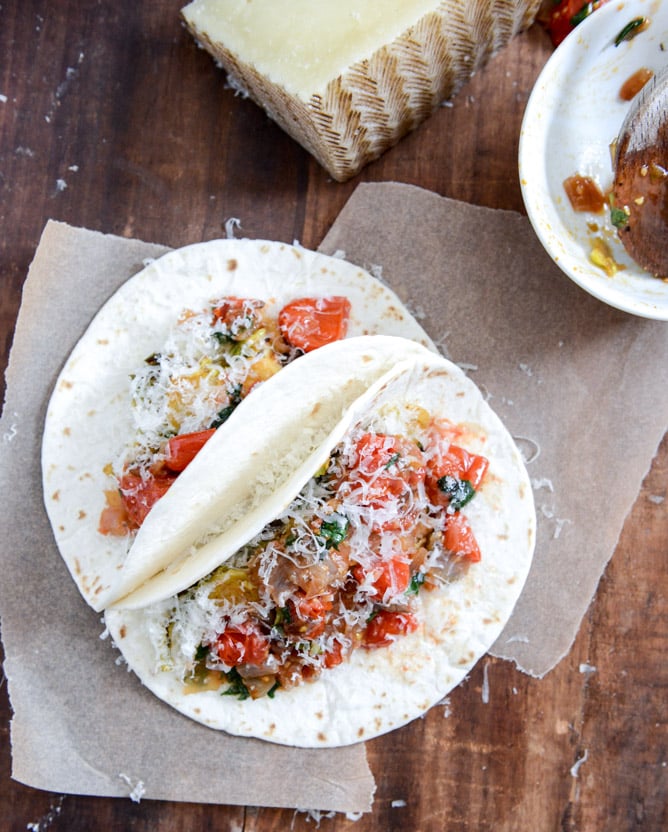 I told my husband that I’d have a little snack for him – knowing that this could never constitute a full meal, ugh – and that I was putting Brussels sprouts in tortillas and doing sacrilegious things to the term “taco.” He said he was down (after questioning what kind of meat would be included) and surprisingly, ate them right along with me. I couldn’t believe it. Like, scarfed.them.down.

But we both did, so I can’t blame him.

It may be deceiving, but this meal is light. It doesn’t feel heavy when eating – in fact, I myself wanted a side or two. Any sort of chips with guac or maybe a bean salad would be perfect. 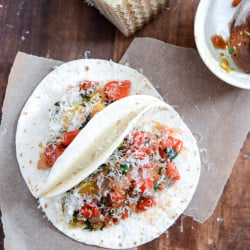 Annnd I’m done. If you like the sprout of the Brussels, these win.