I’m thinking that my 2014 is already off to a great start since I’m getting really good at math. The square root of the number of little pasta noodles in your soup is directly correlated to the number of cocktails you should consume while preparing this meal. Even one year ago it would have been a stretch. Totally reaching.

Today, I’m eating kale in soup. Seriously. I want to shout in people’s faces on the street, HEY YOU! I’M EATING KALE! IN SOUP! I’m also sort of eating kale in salad, at times. It’s still one of those issues where I can choke down about half of the salad before wanting to pitch a fit, but we will discuss more about that shortly. I’m pretty sure that the number of kale salads you eat per week plus the stairs you climb equals things like mac and cheese, bacon breakfast sandwiches, ice cream sundaes and cheesecake. Math is so EASY.

Some of you maybe be doubly shocked by this soup considered I’ve also complained about my feelings on sausage in previous years. It’s not my meat of choice, but as long as the fennel seeds are absent, I’m game every once and a while. That’s why I went with turkey sausage here instead of pork, because my grocery store’s version goes low on the fennel. This original recipe actually calls for additional fennel seeds to be added with the onion, so if you’re down with that, go ahead and add them. I will then promptly reevaluate our friendship. But it’s okay. 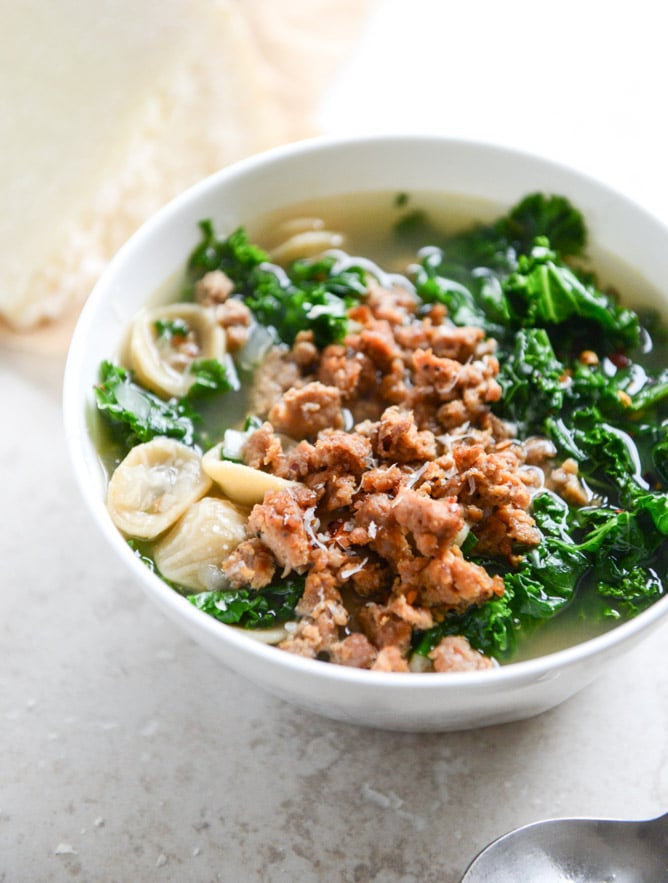