I’ve kinda been keeping a secret from you. 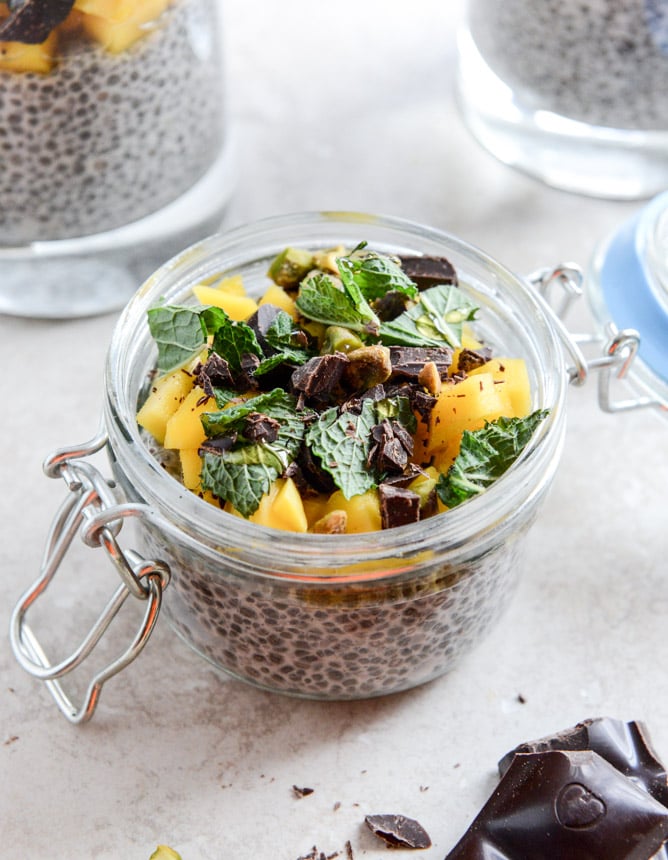 A secret in pudding form.

While everyone else is talking about lunges (I’m doing them) and year words (I have one) and kale (it’s coming) and organizing (I’m trying), I’m just going to talk about how I can’t stop shoving pudding in my face. Not real pudding though. I mean, well, sort of real pudding. But not.

You know what I mean.

I’ve been downright crazy over this combination of mango, dark chocolate, pistachios and mint for months now. I first had it in Utah in early October with yogurt and have been hooked ever since. Originally the snack consisted of oranges instead of mangos, but I don’t know. Oranges can be… meh. So much pith sometimes. I will say though that I ate this with a few satsumas over the last two weeks and that was to die for. So good. 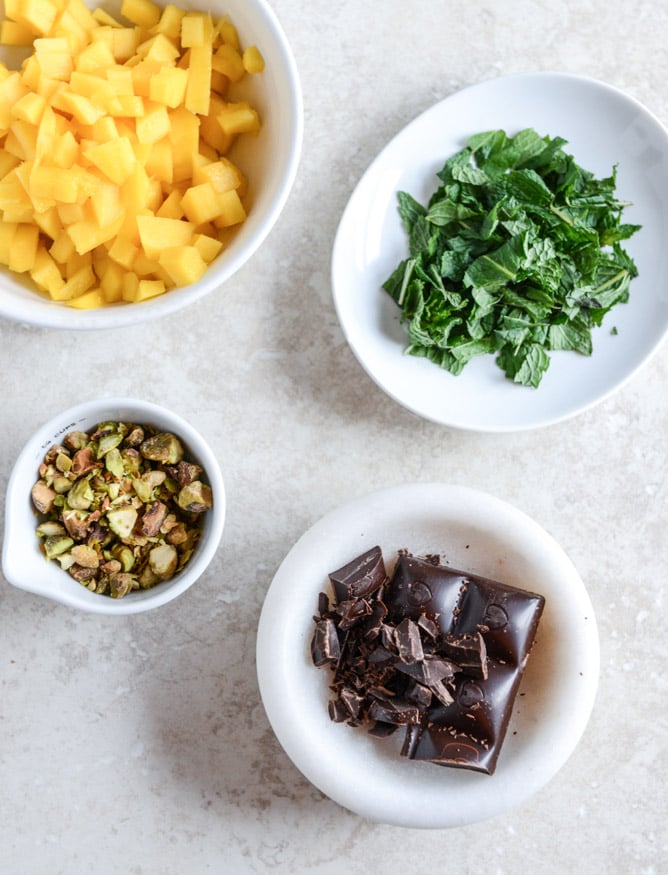 I’m freaking over the combo with mangos now too though – especially the perfect ripe and juicy ones. They can be tough to find but when you do find one? Do this with it. It’s unreal.

Some of you spaz out over chia seeds and I think it’s understandable. Coming from a major “texture person,” chia seeds CAN be weird. They just happen to be the sort of weird that I like. Pretty sure it has to do with my obsession with dried figs – you know, the snap, crackle, pop of those little seeds? That’s why I love chias too. I’ve heard others compare this to tapioca pudding which is probably correct, but guess what? I’ve only eaten tapioca pudding like twice in my life. And at least one of those was straight out of a jello pudding cup. Damn those things are good.

Anyhoo: you know I’ve used chia for years in smoothies and granola bars and stuff like that. It was only in the last few months that I really started loving chia in faux pudding form, after browsing through Giada’s book in Barnes and Noble, aka my happy place. Can I just live inside of a book store forever and ever and ever? My own little spin here includes a base with vanilla bean paste (ps -> I found some at homegoods last week for like $5) that is more versatile than, well… anything else I can think of right now.  It just goes with the all the things.

Am I too old to be saying all the things now?

I recently saw an article that gave rules for things you should stop saying in your 30s. Luckily, I think I was only saying about five out of eight. Perhaps 2014 shall be the year of growing up.

So yeah. While this would make a fab breakfast or maybe a dessert for some, it’s an ideal afternoon snack for me. It gives me that little bit of chocolate that I crave but it holds me over through yoga, also giving me enough energy until dinnertime.  For a while, you may remember that I was eating avocado pudding for my afternoon snack, and while I still love it, I can’t find a good avocado ‘round here to save my life. Thankfully I have a friend who sent me a box full of avocados from their tree, so you can be sure to see some avocado on my chia pudding next. Eh.

In the meantime, I just love this little flavor burst and the best part… obviously… is that you can add whatever you like. I’ve done blueberries and coconut, warm strawberries and those honey roasted almonds from Trader Joes that I lose my mind over and even just bananas and cinnamon.

I think we can say that I’m a massive chia pudding junkie. If you’re not fearful of weird little poppy things in your faux pudding, you should definitely maybe give it a shot. Probably. For sure. Yield: 4 to 6 servings
Print Recipe Pin Recipe
No ratings yet
Leave a Review » 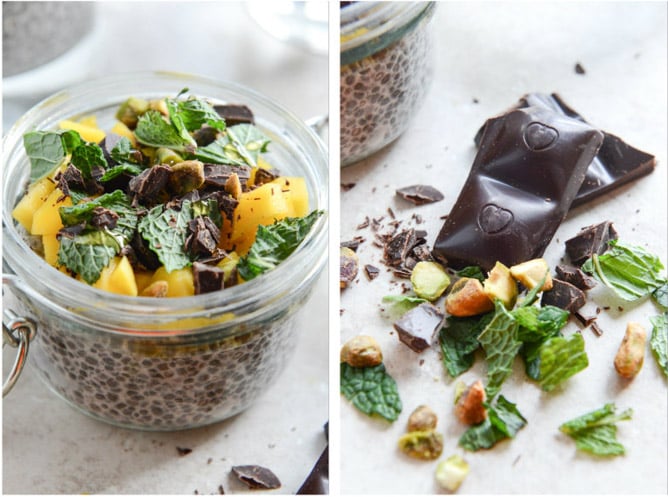 I mean, who doesn’t want to eat chocolate with little hearts on it? Speaking of growing up.