Hey hey! This past weekend we spent a fun, touristy less than 48 hours in DC and I’m going to bring you along while I yap all about it. So. I love Washington DC. I have a fascination with all things American history (especially presidents) and get giddy when I’m there. I want to do every touristy thing I possibly can and I’d probably do it every single year and still not be bored. My brother Andy and his girlfriend Mary came with us and the four of us ate our way through the city. We stayed at the Sofitel and the location was perfect for what we wanted to do. We’ve stayed in the Sofitel in NYC before and have liked it. I will say though… a few years ago we stayed at the Mayflower Renaissance in DC and I did like that more.

I took my real life camera but did I use it? Barely. You guys know I hate it. By Friday evening it was stashed in the hotel. So all of these photos are from my iPhone… as usual. Also, let’s discuss footwear for a minute. On my favorites posts and previous instagrams, you guys always ask me if my tieks are worth it and super comfortable. While I love them for everyday life, I’m always hesitant to say that they are “the most comfortable ever!” because they are really my first flats ever. But. How about I walked ALL OVER on Friday, at least around eight hours of walking – in my tieks. By the end of the night my feet were definitely tired but the tieks were so comfortable for walking. I was seriously impressed. I did walk around in the pair that I bought last October – so they are well worn in.

Yeah, so. We walked our faces off and while the temperature hovered in the 50s and 60s, it was overcast and a bit windy. So after being chilly for 24 hours, we ended up renting the city bikes and riding around Saturday afternoon. We saw the monuments, the museums, we attempted to see the national archives but didn’t feel like waiting in line – basically all the touristy things to do in DC. On Saturday, we did something super fun and had a little private tour of the Supreme Court. I think the general consensus was that it was our favorite part of the trip. Getting to see all the odds and ends of the court and having an awesome history lesson with new friends. We LOVED it. Thank you so much for the tour Melody and Heather! And now I’m just going to binge watch the crap out of the West Wing again because it’s real life and makes me feel like I’m living it. And probably House of Cards. BUT. What you really want to know is where we ate. Right?

So let’s get to it. The carbcation of epic proportions. Friday night we ate at Proof. We loved our cocktails and appetizers, but our meals were mostly just… meh. For apps, we got the whipped goat cheese and tuna tartar. I could house both plates right this minute – they were quite delicious. For our meals, we ended up with the scallops and housemade tagliatelle. They were okay, but nothing that blew our mind. But that beverage was bulliet bourbon, grapefruit juice and honey – and now I must recreate it.

Um… next. I pretty much want to do a post all about cupcakes. You guys were blowing up my instagram saying we HAD to go to Baked and Wired. One very disturbing bike ride and a fight (three out of the four of us had a meltdown) later, we made it there and just about died. I wanted ALL the things. I was so overwhelmed. Seriously. On Saturday, I bought a few chocolate chip cookies, A UNICORN CUPCAKE (okay, actually it was called “uniporn rainho”) and a red velvet cupcake for Eddie. He promptly ate all of the cookies without me. I promptly ate my cupcake for lunch. After we stopped for water, diet Coke and iced coffee, of course. The four of us loved Baked and Wired so much that we swung by on our way home and bought, um, I think 16 more cupcakes today? HALP ME.

We got six. Andy and Mary got ten. To share with others of course. We need help. Decisions decisions. I rarely am impressed with cupcakes from any bakery (I find them to be underwhelming (read: dry) almost every single time) but these were to die for. We didn’t make it to any other bakeries after that, FYI.

Dinner on Saturday night was at Oyamel. Otherwise known as the magical place where my husband discovered that he liked guacamole. Cue angels singing. They make the guac tableside and he dug in. The four of us devoured it within maybe two minutes? We were so hungry. I asked if he would eat guac if I made it at home, to which he responded with, “well, yeah! if you make it fresh.” Um. Okay. How is it possible to NOT make it fresh? I’m going to take him up on that offer this weekend.

So Oyamel was awesome, other than the fact that we had to wait a long ass time for our reservations. The margaritas though. OH MY WORD. See the foam on top of that drink? Instead of serving the the marg with a salted rim, they serve it with salted foam. It might sound odd and even I was skeptical at first because I love a perfect margarita. But these were fabulous. Eddie doesn’t like margaritas, so he order mojitos which came with mint foam.

Just so, so good. 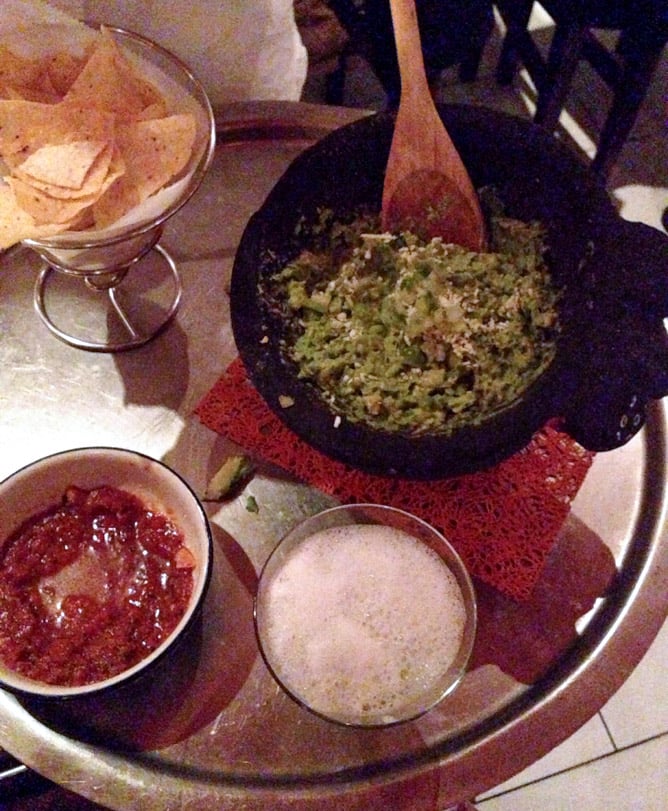 Many of you asked if we had the grasshoppers… which apparently are on the menu but thankfully I overlooked. I’m not brave enough for that. If you know anything about me, I HATE BUGS. Like hate. Have a totally ridiculous irrational fear.

After our guac domination, we ordered the refried beans to start. Fantastic. Then we all ordered a bunch of different tacos, obviously. I went with the pulled pork and chorizo, the wild mushroom and the confit of baby pig. Super good. I’m still dreaming of it. We definitely enjoyed that over our dinner Friday night.

In other random food news, we HAD to go to Shake Shack because we don’t have one here in Pittsburgh. It’s a must because they have my favorite cheese fries ever and I like the burgers better than Five Guys. And pinkberry, because why not? Pinkberry was sort of an afternoon snack to hold us over until our very late dinner reservation. Tart froyo with strawberries and milk chocolate crunch. Oh hi, I’m dead. Sadly, we didn’t do any crazy breakfast things. I was more excited about our potential dinners and just can’t do a massive brunch when I’m traveling –  and am going to walk all day long and don’t want to hate life. Saturday we quickly ate at the Old Ebbitt Grill (I have nothing good to say about that but I think the others enjoyed their meals) and Sunday we ate at a little bistro in our hotel before taking off. And that’s that. Super fast and fun. Now I’m starving.

You guys gave me lots of other awesome restaurant ideas which I will keep in my pocket for future use. It’s only three hours away after all. And I hope that if I visit enough, maybe I’ll just BEGIN to morph into Robin Wright vis House of Cards. Totally. What did you do this weekend? Enlighten me.

91 Comments on “Real Life Wednesday: On Adventures in DC.”