Taking You With Me To NYC, Cincinnati & Cleveland! I spent the majority of last week in NYC for book things where I was mostly sweating my face off but having an excellent yet busy time.

The first order of business was obviously: Does being seven months pregnant rationalize this? A bit.

The second order of business was choking on a brussels sprouts mid-TV segment. Yes. I choked on the damn sprout. TV things do not make me nervous (now sit me down at a desk and tell me to finish my novel, HELLO NERVES) but when you suck a barely-cooked sprout down your windpipe and can’t talk for five minutes, it’s pretty horrific. I was a mix of laughing hysterically, not being able to make any sort of sound and overflowing with tears because I couldn’t breath.

I will probably never eat on camera again. Like ever.

P.S. I’m really hoping I can get the blooper clip so you can see it??

Last Wednesday night was a Seriously Delish signing at Whisk. It was seriously AMAZING. For real. Thank you to everyone who came!! Even if it was the hottest day of the entire summer. The best parts may have been getting to spend a few lovely moments with Maggy and my biggest girl crush ever, Andrea. Could not take the excitement. !!!!!

And I stole a bunch of your pictures from instagram because you’re so darn cute. More important things, like places I ate. Casa Mono for lunch, Beecher’s for late night dinner (total carb cheese fest, it was ridiculous), Lucy’s Whey (which I am now utterly obsessed with) and of course I had to stop at City Bakery because I can’t leave without a pretzel croissant. This is also my favorite aerial view. It makes me feel like I’m inside an episode of Felicity for some reason. Obviously the theme of last week was cheese and carbs. I promise I ate some other things but like… does that even matter?

Then. I went to Cincinnati! I had never been. I really liked it. A lot. Like a lot, a lot. 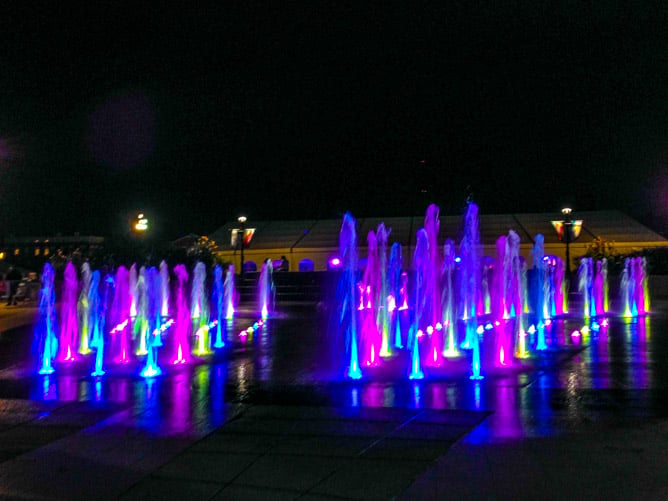 I especially loved this neon glowing fountain at night. I spent a good 20 minutes in front of it and wasted about 342 iPhone photos on it. It was fun and cute and I would like one in my backyard.

Because that is important. Food things: we ate at a Tavola and had the fig jam and prosciutto pizza. SO GOOD. We also had the artichoke pizza with pesto and it was delicious too. But you know my stance on red sauce. The first pizza was to die for.

It also got me super excited for brussels season and cast iron skillet pizza.

We got ice cream too at Graeter’s because we were essentially threatened within an inch of our life if we didn’t try it. Other priorities included stopping at Holtman’s Donuts and having the worst time ordering because we wanted EVERYTHING. Let’s talk about this chocolate and bacon donut that is called the muddy pig. Hello most brilliant name in the universe.

These were ridiculous. I had bites of a couple different ones before calling it a day. I’m sad that pregnancy has taken away my donut eating capabilities.

Oh wait! Let me tell you about one more thing. It’s a hotel restaurant meal… yes. I had to leave NYC at 3:30(am) meaning by the time I got into Cincinnati, I was chock full of faux starvation. I stayed at the Renaissance and ordered some scrambled eggs and then was convinced (bullied?) to try this crème brulee French toast which was… astoundingly fabulous. Like quite possibly the best French toast I’ve ever had in my life.

I figured it was worth mentioning. Sidebar: it’s pretty much impossible to eat by yourself so you should probably order it to share. If you’re into that kind of thing. Next… on to Cleveland. My brother lives there (you might remember) so he met me in Cincy and we drove to Cleveland.

Allllll of the photos in this post were taken with an iPhone because when your overpack to the point of breaking your back every time you move your suitcase, your ten pound real camera doesn’t make the cut. I wore a very comfortable yet horrifically improper shoe choice in Ohio both days. They certainly didn’t work on Saturday when I had to walk around in the grass but it worked on Sunday when it was freezing and perfect fall weather. Cleveland was a super fast trip but in food news, we got a whole slew of pastries and coffee from On The Rise Bakery that morning. SO GOOD. I signed some books at the Learned Owl which is another one of those book stores I go crazy over. Cutest ever!!

Just have to say… I cannot stand how much I love meeting you and talking with you and hugging you. My brother also couldn’t believe how many people wanted to talk about makeup or neon, so there’s that.

Eddie and my mom came to pick me up and cart me and my 50lb+ suitcase home… and we were off. He’d like you to know that he had a burger from Flipside before the signing, FYI. Typically him. And that was some of the last week! Seriously, I know I’m annoyingly repetitive but thank you guys so much for making this stuff happen! I’m still going nuts over the #seriouslydelish hashtag on instagram. It’s my last stop before my eyes close every night. I.love.you.

Okay I swear: next up, an update on being knocked up.

50 Comments on “Taking You With Me To NYC, Cincinnati & Cleveland!”