Who’s in for a mikshake swim? This trash concoction in a glass came from one thing: expiring strawberries. I had lots in the fridge and knew I had to do something.

Granola and yogurt? No. That’s boring.

I didn’t want to make a cake or a cupcake or a cheesecake or a pie or whatever. I didn’t want to coat them in chocolate (though I sort of did want to do that) and eat them for lunch. I almost made that 90s fruit pizza but that would have been slightly ridiculous since the only ingredient I had on hand? The strawberries.

And I needed a high maintenance milkshake. I didn’t actually blend my strawberries in with the ice cream. Milkshake rebellion. I wanted the syrupy sauce to be swirled in the shake and I wanted chunks of strawberries too. Which, yes, required a spoon to get every last bit but I mean, we’re already putting chunks of sugared pistachio on a DRINK. So why stop there? Let’s make it more difficult.

So much going on in this shake, that way you BURN calories when you consume it. Brilliant. P.S. let’s put these in and on everything. Ooooo do you know what I topped this baby with?

I’m almost embarrassed to tell you. YEP. I hate myself.

IT WAS SO FLIPPING FAB.

I had some leftover frosting from the nutella swirl carrot cake and boom – it went right on top. I don’t regret it.

You obviously don’t need to do that (but you should) because who has leftover frosting? You can totally use whipped cream or maybe even coconut cream (yes! do that!) – or not use anything at all and just eat pistachio brittle on the side.

Because I know when I have dessert the first thought in my brain is to add a milkshake to the side. This is one of those recipes that I look at from a distance and wonder if I would truly make myself, if I was a reader of this blog. I mean, it’s quite high maintenance to make a pan of pistachio brittle covered in chocolate ganache only to break it up and stick it on top of a milkshake, which means you ultimately have to eat it with your hands.

But I have these moments. The ones where I want to make something really pretty or really delicious or really high maintenance, even if it’s in a single or double serving, JUST BECAUSE. I equate the idea to that of decorating for a one-day holiday or making the bed only to just get in it again twelve hours later. I like to do it to celebrate life, to make a moment special, to make time really count.

A la Kristen Wiig in Bridesmaids, when she makes her own cupcake with crazy fondant topping and the… eats it.

I’ve found it to be even more true now that I have Max. One, because I rarely have time to myself ever and if I do, I want it to be… awesome? Pretty? Fun? Memorable? Like if I have an hour, I want to make something fancy for myself to eat even if it’s a trashed up BLT.

Let’s be real: that’s fancy in my book. The other reason is that I really want moments to be special for Max. Not that selfishly making a milkshake for myself has anything to do with that, but hear me out. This is something I’ve thought a ton about since he was born. We’ve had lots of one-day holidays since December and time passes slower when you’re a little kid. I want to live up each day and celebrate every little thing.

Like making a totally whacked out milkshake that requires a lot more than tossing ice cream into a blender and sucking it through a straw. I’M PRACTICING OKAY?

Other than the long rambly rant that is most likely a product of my own nostalgia, this is kind of a two part recipe. A two for one, if you will. Don’t want the shake? Just make the brittle! You can make it ahead of time. Make it with the chocolate or without. You can make it for the weekend and who knows? Maybe come Sunday night you’ll have a few brittle shards left that would just fit perfectly on top of a milkshake.

Or just make a roasted strawberry milkshake. Lots of vanilla bean. Make shooters! Spike them. Rum rum rum. Maybe some sort of liqueur. We should do all of that. 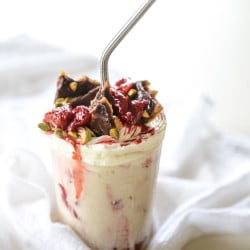 I will gladly add another straw.