I have a very serious question. 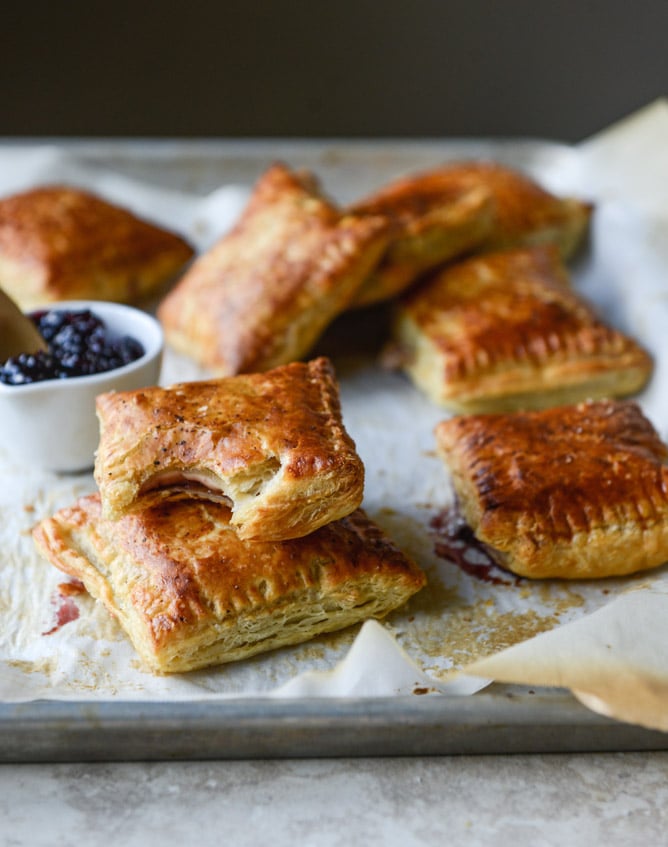 Did you grow up in the land of pop tarts and toaster strudels? The land of frosting and sprinkles and icing in a foil package? Thank you 90s.

I totally did, though I enjoyed them more as a snack than breakfast. When it came to before-school breakfasts, I was hooked on an English muffin with peanut butter and honey. And sometimes banana.

I’m still hooked on that! How boring. If needed, I could get by on a cinnamon brown sugar pop tart and I most definitely remember when s’mores pop tarts came on the scene. THAT was huge. The thing with pop tarts though? I never wanted to eat any of the unfrosted crust. So I basically cut the already-rectangular shaped tart into a smaller rectangle and ate just the frosted section.

And it never tasted as great as I hoped.

This is very embarrassing.

I didn’t have any real cravings while I was pregnant, but one day I was walking in the grocery store and thought a pop tart sounded just fabulous. Can I insert the face-covering monkey emoji here?

I bought a box.

I got home and toasted that thang.

It was brown sugar cinnamon, of course. And it was just… meh. Meh meh meh. Actually pretty gross. Needless to say, my childhood nostalgia was not found in the gooey sugary center. 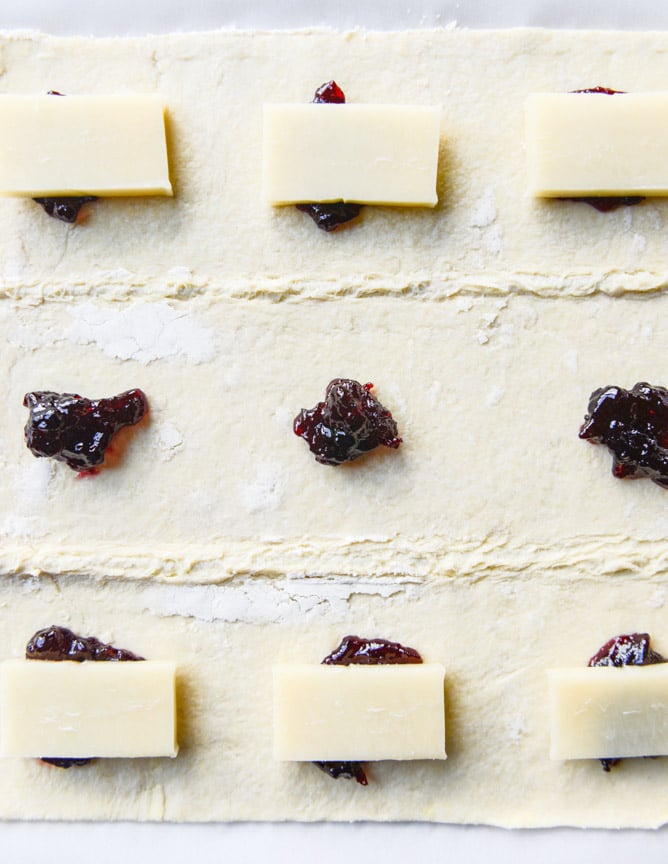 I was never really a toaster strudel gal (except I think they had chocolate? And I think I tasted it once? of course.) because – get this – I didn’t like the icing on top. So strange. The flakiness though! Oh the flakiness. That was something I could get behind.

And no, I don’t mean my own flakiness. The strudel’s flakiness. Plus, since I’m on a temporary hiatus from pie crust (WE WERE ON A BREAK!), puff pastry is the way to go. Remember last year at this time when I became wildly nutty over puff pastry?

GAH. It’s so delicious. And buttery. And flakey! More flakiness. From me this time.

I desperately want to make my own but since I no longer have ten hours to roll out flour and butter, that may have to wait. 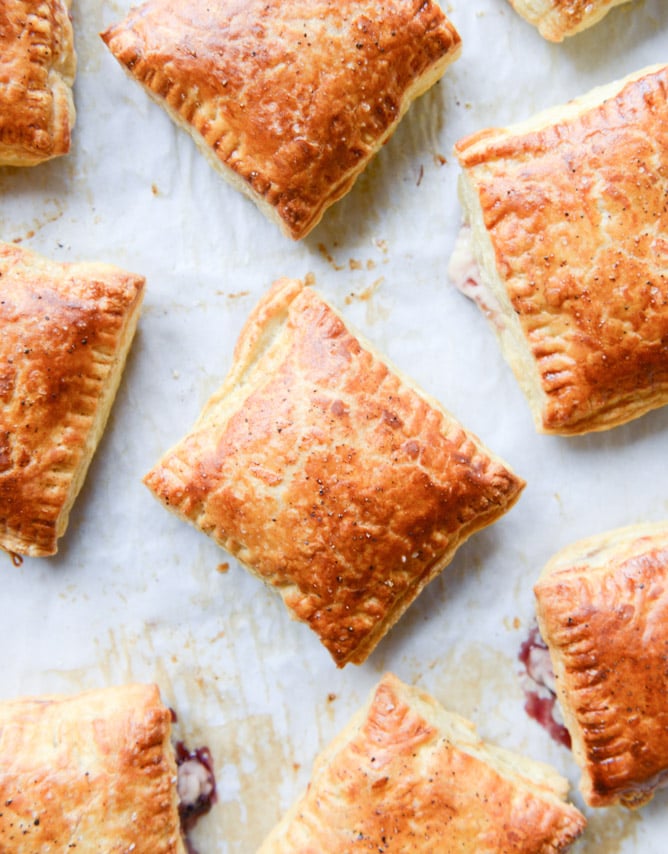 So. I made two versions of these little pockets o’ love. First, this smoked cheddar and tart cherry jam. I used a super sharp white cheddar, and I’m just going to tell you: use a little more than you think you need. You’ll never regret extra cheese.

I used some tart cherry jam that I had leftover from American Spoon last summer. And all I did was… place them strategically in the pastry, cover with more pastry, slice, fork press, bake and EAT.

This is way too embarrassingly easy. Ummm but wait. The other version that I made? I can’t even tell you. You can probably guess what it is. This summer. And toasty. And fire. And chocolate.

I mean, I really have no idea how you’d guess since I’m just soooo unpredictable.

Anyhoo – this itty bitty appetizer/snack/breakfast food/side dish? We have some sweet and tart and smoky and savory in one little pocket. All covered with a bit of salt and pepper. It’s like a dang dream come true.

It’s quite impossible to not hoard the entire batch for yourself. I’ll allow it. It’s okay. 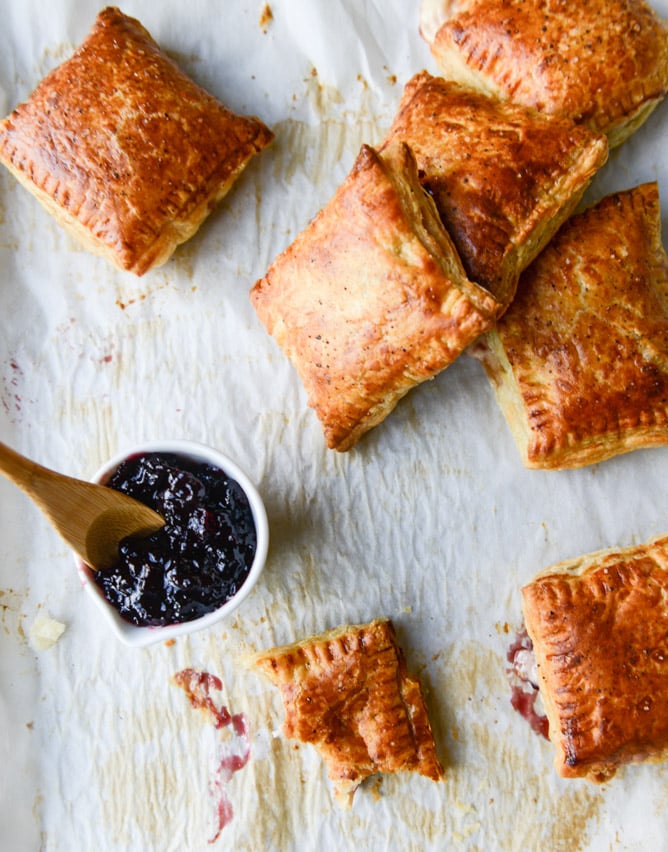 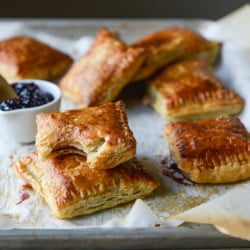 Yield: 4 to 6 as an appetizer/breakfast/snack
Total Time: 40 mins
Print Recipe Pin Recipe
No ratings yet
Leave a Review » 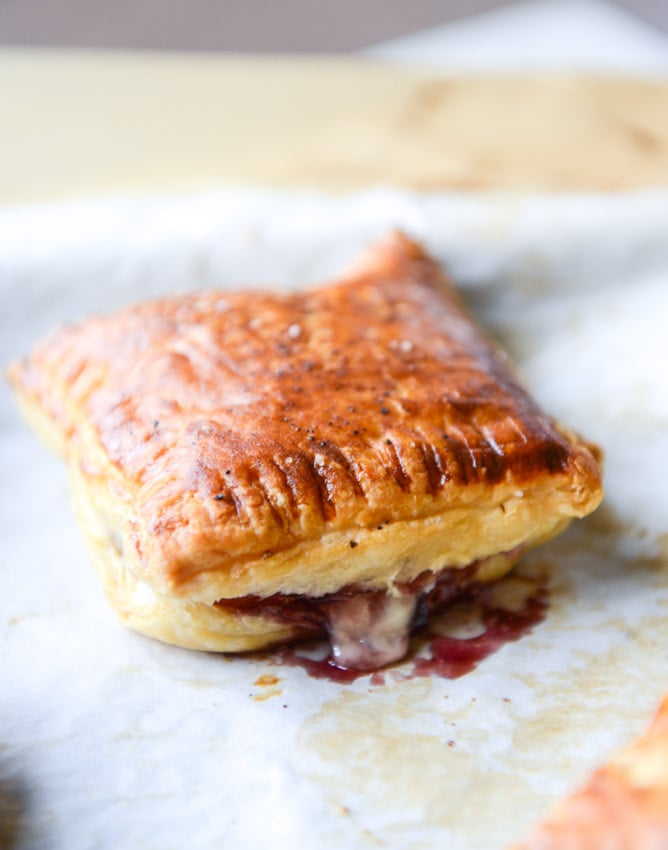 I totally want to use one of these as a raft in a river of melty cheddar.