And it doesn’t even find itself filled with cherries! Or berries! Or fruit of any kind. It’s a savory pie and we’re going to be totally cool with that. And comfortable with it’s delicious identity. It won’t pretend to be anything else. I swear.

Except a companion to a bottle of wine on your patio tonight. Maybe? 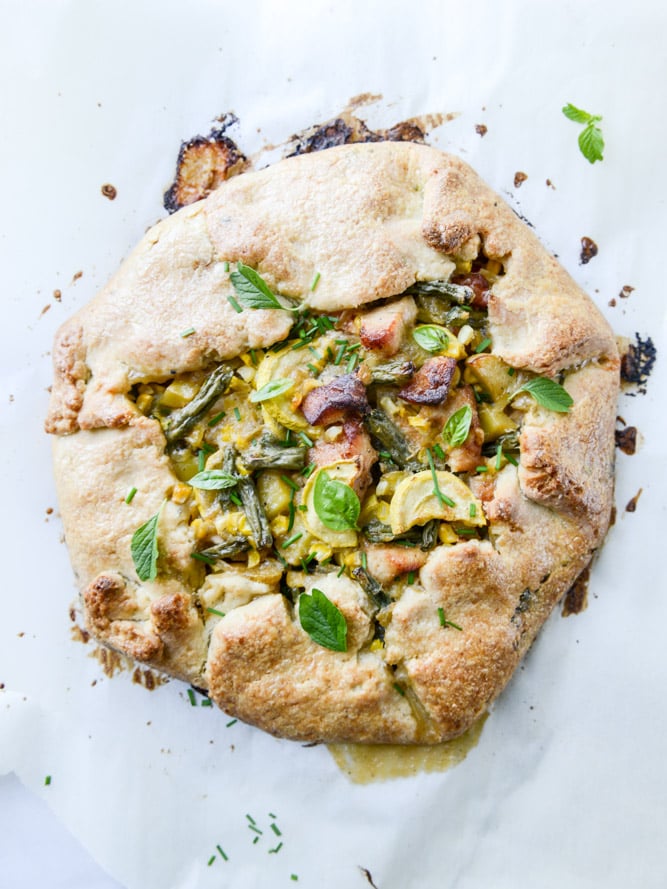 Last year I fell madly in love with galettes – crostatas – whatever you’d like to call them – these pretty little rustic pie crust things filled with fruit or in this case, something savory.

If you’ve been reading for awhile, you know that pie crust really isn’t my thing and making a version that is just thrown together and all free formed is right up my alley. Super simple and fast too.

Oh but wait. Because this crust? I wanted to consume all of the crust, every last bit – even alone without the filling if need be. It’s salty but filled with herbs and butter and flakey and then the way it perfectly envelops the creamy chicken and squash and green beans? UGH. So so so wonderful. Anyhoo. Galettes and crostatas. I first made this peach version and was HOOKED with a capital h. I later shared a butternut squash one which was also delish because brown butter. Forever and always.

Today, we’re doing chicken pot pie but with veggies that are super in season because it’s simple. This summer we have been eating so seasonally fresh – even more so that we usually do because it’s just SO easy. I don’t always have (or take) a ton of time to prepare dinner anymore, so lots of times the meal consists of fresh tomatoes, mozzarella, blankets of herbs and balsamic. Or arugula and fresh fruit with torn garlic croutons. Eddie will grill some chicken and I’ll make a zucchini and feta salad (I may share this, it’s fab). Yes, even some vegetables are happening. Who am I?!

All the summer produce takes the guesswork out of dinner and it’s just.so.incredible. [Or, sometimes you have to go to Five Guys on Sunday night at 7:30 and have a burger. And a large diet vanilla coke, which is awesome until you’re awake until 4am, not due to a crying baby but an overload of caffeine. FUN. Also. Occasionally you just want home cooked comfort food, even in the summer. Right? There’s been quite a lack of summer here this past month because it’s been insanely rainy and weird outside. Which made me feel slightly better about turning on the oven in July for this so called comfort food.

A semi-opened faced chicken pot pie that has a personality all it’s own and wants to give you one hot summer meal. Repurposing summer veg and savoring every bite.

P.S. you can always make this even more summery but serving a slice with a side of green salad. Of course. It’s a big secret right there: put things on greens and they automatically = summer.

Ice cold pinot gris too. Do it. 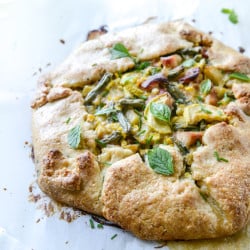 The number I did on that crust. You don’t even want to know.