There’s a very important reason that you must know about this cake. And noooooo, it’s not because I had to suffer through WWE summerslam or whatever that torturous thing was called last night.

But I did and it was. Torturous, that is.

No no, it’s because peach season is almost over, especially GOOD peach season, and if you’ve been around for awhile you know that every year the hunt is on for just that one good peach. Because a lot of times it’s only one. To get two plus good peaches a summer is a unicorn. Same goes for mangos.

Example: this past weekend I had the best tomato of my life, ever. I know that sounds dramatic but it was crazy sweet and juicy and I doubt I will get one close to that this year. Related: most delicious BLT, with avocado. So since I can’t always get that ideal perfection with peaches, I have to do things like mix with them with cinnamon sugar and bourbon to make them extra wonderful. I ended up making this cake because… I first made a pie.

That was a massive fail.

I just can’t get the hang of it on the regular. It was like I didn’t use enough peaches and berries and I messed up the crust and it wasn’t pretty and the berries didn’t get juicy and instead all of the fruit had this gross flour coating on it and… and… and… oomph. Don’t worry, we still took a few bites for quality control.

I had to do something though! I needed my peach dessert fix for the summer. Which is almost over? Okay okay, I knoooow that every time I say the summer is almost over, you yell at me. I don’t *really* think that the summer is almost over, I’m aware that there is an entire month of summer left. However, I still have a child brain and can’t get it through my head that I no longer have to go back to school the third week of August (I mean, it’s only been, um, like, TEN years) and I just think that the end of August will be forever end-o-summer days for me.

Which is the worst, because the moment I get the hang of realizing summer goes until late September, kids of my own will probably be going back to school the third week of August. Life is so unfaaaaair.

See also: I am continuing to eat all the summer foods though late September, so there is that. It’s real, people! [sidebar, can we talk about my love for this cake stand? It was my grandma’s and while I have 24 too many cake stands (maybe 25), this is my faaaave for obvious reasons.] All steamy peach cake and whining aside, what did you do the past few days? Where did you go? What did you eat? I ate some of the best pizza which will make every dinner this week want to cry with sadness. No, really, I just keep belting out “Nothing Compares to You” circa 1989 every time I look at that photo.

And I made Eddie hang like 33 pictures in our house and I thought it would take half an hour but it took like six hours.

OH and I also had some shaved ice which was fantastic. Can I recreate shaved ice? Teach me these things because I need that in my life. 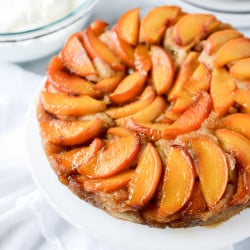