How many times have you already heard that it’s the most wonderful time of the year?! 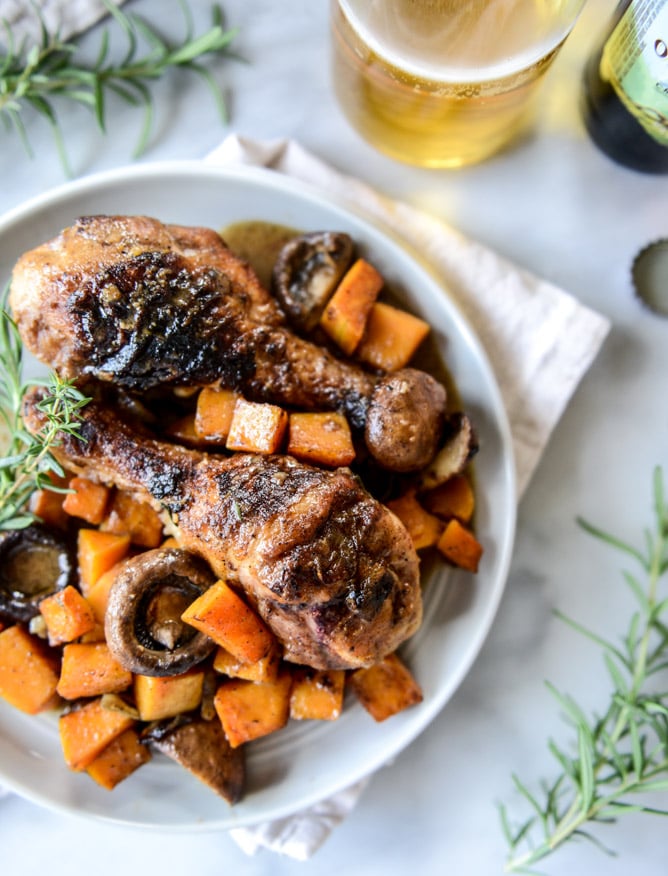 Can I reserve the right to say that once a month until December? I think. Especially since right now it’s past midnight and I’m trying not to go downstairs and eat peanut butter m&m’s. The whole “go downstairs” part helps with that.

But! That’s not why this is the most wonderful time. You know?

Oh yes, so much yes. I adore any and all types of cider and better yet: love all things flavored with cider. Like baked goods and candy but more importantly, anything savory. Chicken, steak, potatoes, even brussels sprouts. Whaaaaaat.

While I don’t go too crazy for pumpkin-flavored goods anymore, you can absolutely give me apple cider flavored [insert random food here] and I’ll be down. Plus, one of my favorite places makes an apple cider grilling sauce (um, yes, I know, it’s incredible) and when I inevitably go through both jars that I have in my pantry, I’ll need some way to kind of figure it out on my own. PLUS: I love a good one pot chicken dish. Um, it’s been over a MONTH since I’ve shared a chicken recipe too. Very unlike me. I keep making things that seem similar and I have no idea what’s behind that other than the fact that mom brain is a thing. We are still eating tonnnnnssss of chicken, if only because I spent so many months being just totally… over it… that now it’s all I want.

Last week I even made chicken noodle soup. It was 87 degrees outside, but whatever. It was delicious.

Then I decided I wanted to make it again this week because we “hadn’t had it in awhile.” Holy freaking mom brain. If you want to be super basic like me, grab a trendy and easily loved hard cider that tastes like boozy apple juice. Super crisp while being both sweet AND dry. How do they do that?! Or you can be all hipster fancy and find one that you have to search far and wide for but that no one else will even know about (until you instagram it, duh).

Doesn’t matter – just make sure you like to drink it! Because we’re going to create a lovely little sauce and crisp up the most flavorful chicken and add squash cubes and mushrooms and herbs and even a little mustard because who can live without mustard? No one, that’s who.

This is one of those dishes that works perfectly on it’s on, but would reeeeeally benefit from a mound of mashed potatoes. If you get my drift. Now you can have your cider and eat it too.