Over the last year, Eddie and I have become serial popcorn eaters. It’s weird, because neither of us cared for popcorn much in previous years – however I didn’t hate going to the movies and doing some damage on that disgustingly wonderful buttered bag of emotions.

Pumps of butter, what?! It’s always been a staple because my dad would make it every week (on the stovetop with only salt) when I was growing up. But it wasn’t until last year around this time, probably when I accidentally on purpose ended up eating popcorn for dinner, that it became a snacky habit.

So. Our go-to nightly popcorn is popped on the stove in coconut oil and covered with this black truffle sesame salt that we are obsessive over. Ridiculously good.

But if we have some time, i.e. it’s the weekend – I love making homemade seasonings and toppings. I even bought Eddie a popcorn seasoning set for Christmas, with mostly selfish reasons that I could taste and learn how to recreate the flavors at home. Millennial moves? Tonight, I’m planning on making no short of three popcorns while we watch the Golden Globes because 1. I’m a crazy person but also because 2. it is my favorite thing at the moment and isn’t even covered in chocolate. Which is a massive win.

I’m not even much of a  heat lover and this has become my new DREAM popcorn. It has everything I want when it comes to snacktime: a hint of sweetness, a touch of heat and toasty, nutty flavor. You make your own homemade microwave (!yes!) popcorn and drizzle it with a flavorbomb mixture. Then cover it in sesame seeds. Then eat the whole bowl. 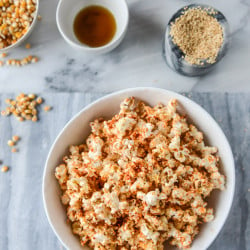