Mine are both up.

We have our own little clique. Toasted and golden, no warm bread please.

If I come across a hugely fantastic breakfast spread, a bagel bar, if you will – with loads of cream cheese flavors and toppings and drizzles and fruits and nut butters and even vegetables, but no toaster?

No thanks. I’ll pass.

I simply can’t do untoasted bagels. Why are they even allowed to be a thing? A few weeks ago, a craving for smoked salmon (or lox, I believe they are sliiiiightly different, as in lox isn’t actually smoked?) on toast hit me HARD. The only thing I had that was crunchy and toast-like were a bunch of seedy crackers, so I made a snack plate of cream cheese on crackers. Topped with avocado, salmon, salt, pepper and a drizzle of toasted sesame oil.

It made my life. And it’s SUCH a filling but light wonderful lunch. Or snack. Or breakfast. Or everything.

One night I wanted it for dessert?

If that doesn’t say my taste buds might be changing, I don’t know what does. I’ve picked savory over sweet a bunch of times recently and am like WHO ARE YOU to myself. 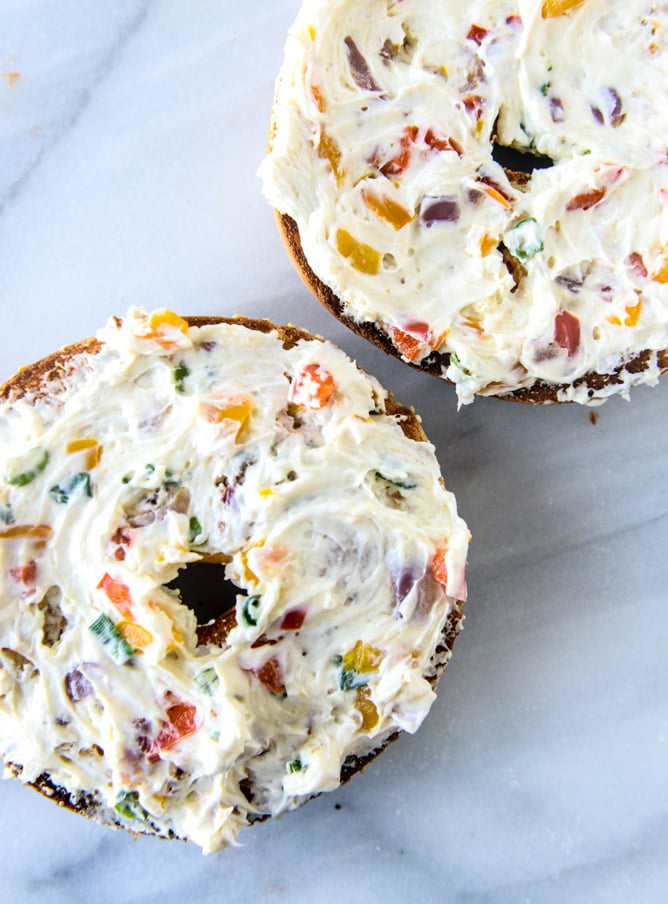 Just like raisins, celery ruins everything. (I can handle the teeniest amount sautéed and softened in something like chicken soup, but no other way and certainly not raw ever.) So while you won’t find those things in my version of cream cheese (though you can obviously add them and not listen to a brat like me), you will find diced peppers and onions and garlics, roasted to perfection. A little bit of char, juicy and naturally sweet, flavored to heaven and back. SO delicious. And just when I thought that it couldn’t get much better than roasted veggie cream cheese and silky salmon, I did something else.

The taste. The texture! It’s a locked and loaded bagel. 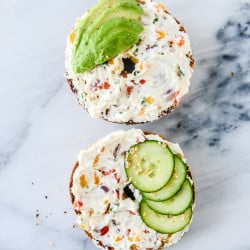