Please trust me enough to eat blueberries on top of your pork. Puhlease.

So! It’s been super hot this week and for the first time ever (really) I just don’t want to turn on the oven. At all. I could live on big bowls of fruit and tomatoes and basil but the thing is that Eddie deems all of those things to be “snacks” and not dinner. Plus, I guess Max really needs to eat too since he’s, you know, a baby human now.

Since we tend to save eating out for the weekends, I always try to have something for dinner every night that is can give us options and bonus leftovers. I keep tossing things in the slow cooker first thing in the morning because my productivity level is high!

Then it tanks after noon. Can I just make every dinner at 8am? Want to know something HORRIFYING?

Years ago when people mentioned “kalua pork” I thought they were saying “kahlua” pork – like pork made with the coffee liqueur. I liked to think in my secret brain that everyone who was talking about this was legitimately insane.

Don’t worry. I eventually realized it was a method of cooking and not coffee liqueur flavored pork. Whomp whomp. I still hadn’t tried the recipe though! At least, as close to the recipe as I could get, without an underground oven. Then, last year at one of my cooking classes, a participant was telling me how delicious the slow cooker recipe was and that I just HAD to get the red Hawaiian sea salt. So I did just that.

I don’t take much convincing, FYI.

BUT. You know I’ve rambled for years about how all food that comes out of the slow cooker tastes like “slow cooker,” – however in recent months I’ve found myself circling back around to using it because sometimes it’s struggle to make dinner. Especially in the summer when we want to be out in the sun and swimming. Especially when Max is dumping four boxes of crackers on my feet while I’m trying to sear chicken. He adds a couple bottles of water for moisture too. He’s smart. Anyhoo. I make this pork now all the time. I alternate between this and the sweet and spicy pork shoulder I made last winter. You need no other recipe.

And I turned it into adorable little sliders and went.to.town. Do they need a sauce? Part of me feels like they need a sauce, but the microgreens and salsa keep it rather fresh and light. Not LIGHT light, I mean it’s pulled pork. But you know what I’m saying. It’s not like there is mayo dripping out of the sides or anything.

(Perhaps there should be though.) The pork is juicy and flavorful and melts in your mouth. The spicy microgreens, yes, are my obvious current obsession but also add the perfect touch of oh-so slight heat and a little crunch too. The salsa!

What can I say about the salsa.

You might remember that I’ve been a massive massive fruit salsa fan for almost my entire life, or at least since I first had it when I was, like, fifteen. This version uses ripe and sweet blueberries, the best mango I’ve found in months, tomatoes, onion, cilantro, lime and salt.

The combination of flavors may SEEM odd, but they taste fantastic. You’ll want to eat more than one.

And guess what! Since they are mini and cute, you totally CAN. 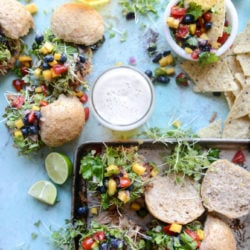 That beer is yours.