The good news is that I’m sort of already making it a thing. Every Monday I’ve been making a batch of muffins for Max (read: Eddie and I, at like 9PM once Max is asleep and we’re blowing through our DVR) to snack on throughout the week. It’s not quite margarita Monday, but maybe it’s sort of close for this season of life? 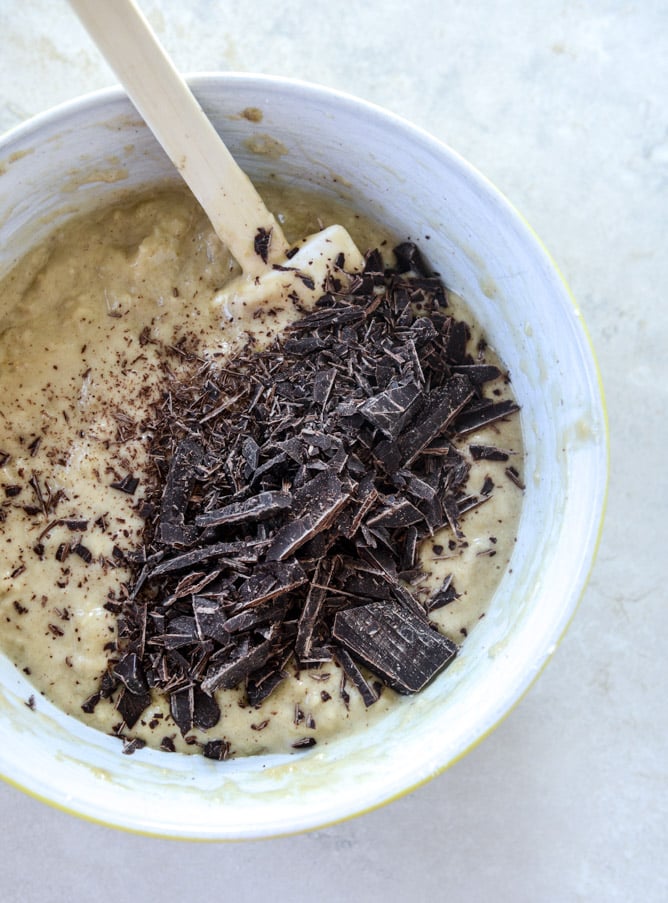 I freaking love banana muffins. It’s no secret that I obviously love everything banana – be it the fruit itself, bread, smoothies made with frozen ones or banana pops dipped in chocolate and peanut butter.

But the real truth is that muffins come in first place. They are SO easy to make. They don’t need to bake for 60 minutes and cool for nearly as long like banana bread does. They can be thrown together and made in 30 minutes. They are an easy, portable snack, albeit one with a few crumbs, but nothing like an actual slice of banana bread crumbling all over the place.

And THEN when you add olive oil and dark chocolate (oh, hi antioxidants), they are practically a health food. I love the way this works. I adore the olive oil here. It’s SIMPLE. Hugely simple. I often make muffins with coconut oil which requires me to melt it first – unless I guess, I stuck it outside in the garage overnight or something. But olive oil is always on my counter and such an easy hack. And I don’t find there to be any bitterness in the muffins. They taste as wonderfully delicious to me as they always do.

Plus, the chocolate makes everrrrrything better. I just chop up some dark chocolate (around 80%) that I have hanging out in my pantry, but chocolate chips would surely work too.

If you have any of those. And don’t eat them straight from the bag with a spoonful of peanut butter like a psycho.

I know nothing about that. The little itty bitty banana slice on top? It has to be sliced THIN. Super thinly sliced. If it’s too thick, it will weigh down your muffin and sink the entire thing.

I don’t know anything about that either. (It might have happened four times before realizing my slices were overzealously thick.) 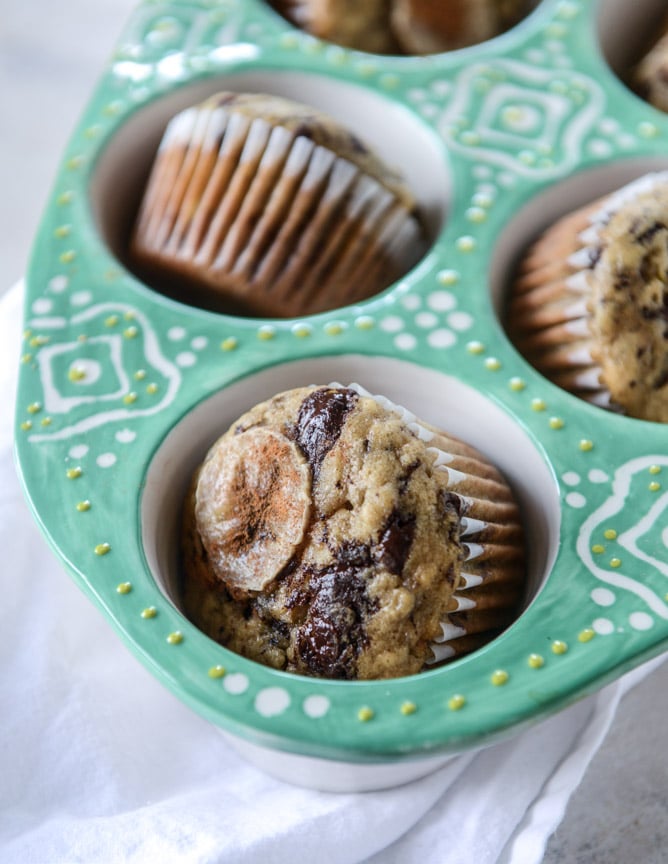 I’ve also been enjoying these muffins in the afternoon with some yogurt and fruit. It’s just enough sweetness that it tastes like dessert. Speaking of, Max calls this “banana cake.” He also calls my blueberry breakfast cookies “blueberry cake.” I think he had both of those things a week after eating birthday cake at a party? So he must have thought it was similar. And it just stuck.

I pretty much want to eat him up on the daily. Now HERE’S a question. What kind of butter should be slathered on chocolate chunk banana muffins? I’m thinking we need a salty version. Something with toasted almond or pistachio or maybe honey sea salt? Give it all to me. 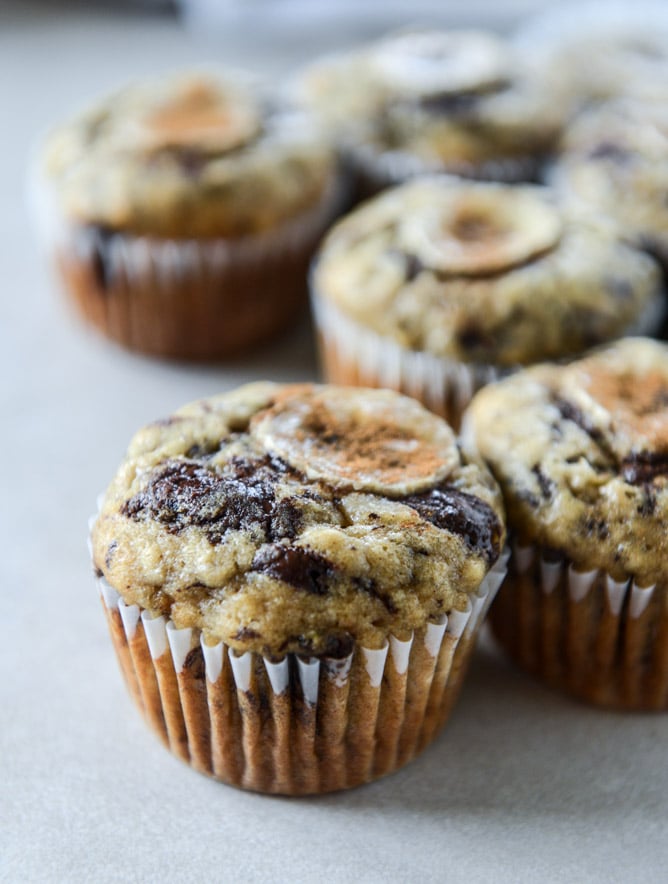 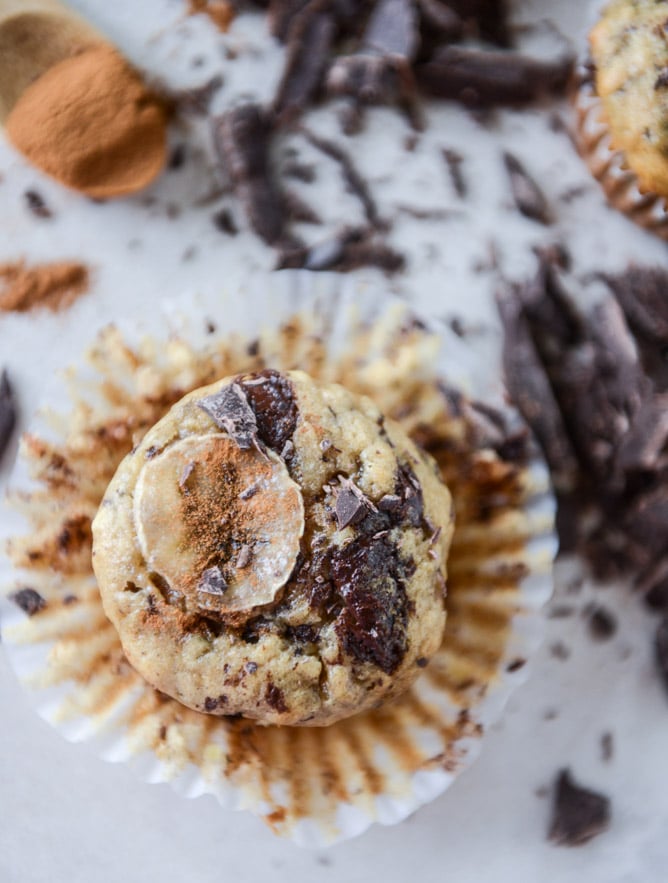 Look at those melty bits!

p.s. howsweeteats was nominated for the best food blog over at the bloglovin’ awards! i would love your vote and heart you mucho. xoxo]

61 Comments on “Banana Muffins with Olive Oil and Dark Chocolate.”