See also: how to perk up a Monday. I’ve got one more little chocolate recipe here for your super sweet teeth. It’s totally NOT a Monday recipe, unless you plan on making it tonight for Valentine’s Day breakfast tomorrow.

Which you totally should. If you would have asked me ten years ago, I probably would have said breakfast, even though doughnuts weren’t my number one choice. I never loved doughnuts or pastries when I was growing up, so the obsession is fairly recent.

But with that fairly recent obsession comes all those crazy trashed up doughnuts. Doughnuts with actual cheesecake on top, with cereal on top, with 34 different glazes and sprinkles – so much stuff on doughnuts! I’m inclined to eat one for dessert instead of breakfast because consuming someone like that first thing in the morning sets me up for a day of terrible choices and also often makes me feel like garbage, especially if it’s consumed alone. Without eggs or fruit or something. This is my compromise: doughnuts are breakfast dessert. Dessert AFTER breakfast! Have a lovely, balanced breakfast first thing in the morning and then eat a doughnut for dessert. It’s a win either way. Also, you’ve already eaten breakfast, so you’re full, but one is never too full for dessert. Never!

Really, I never am. I can always have a bite regardless of the meal I just ate. Shockingly I prefer to SHARE dessert after a big meal, but that’s only because it gives a reason to order multiple different desserts so I can take bites of different flavors. True life. In my perfect doughnut world, yeasted ones are the only to exist. I LOVE yeasted doughnuts. They are so light and fluffy. I don’t dislike cake doughnuts, but I never choose them first. They are just so much more dense.

But I guess that’s a good thing if you’re into coffee dunking, right right? 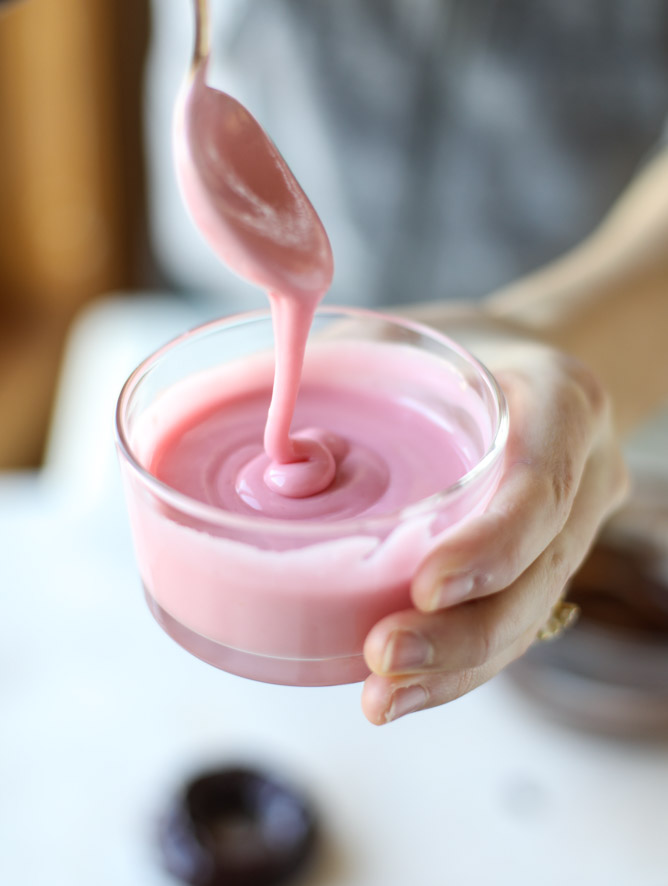 Plus, the baked ones are SO much easier. And your entire house doesn’t smell like a deep fryer. SOLD. On top of these chocolate love bugs, there is a big fat BLOOD ORANGE drizzle. Are you absolutely blown away? That I am sharing yet another blood orange (part of a) recipe?!

It’s not necessary but it is 1. delicious and 2. pink so if they are still in season when you go to make these? It’s a done deal. You neeeeed it. Chocolate fudge + a teeny hint of orange and a giant splash of pink makes for the most adorable breakfast dessert. Or dinner dessert. Or lunch! You could even make these into a cake shape, pile them high on a cake stand or set them on top of a milkshake.

Because that sounds like an appropriate thing to do when you’re eating doughnuts. I love you this many doughnuts!