Blueberry Dragonfruit Smoothie. (and all of my favorite smoothie ingredients!)

Alternatively known as, THE SMOOTHIE THAT IS SAVING ME. 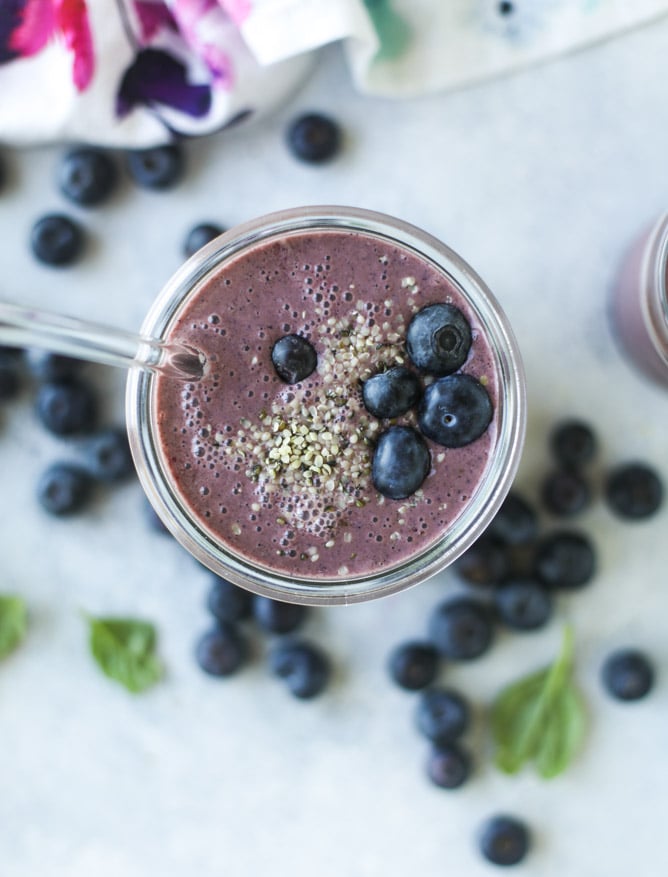 In my extremely long-winded update on Monday, I mentioned that due to my current sitch, I’ll be abandoning cocktail Thursdays! With obvious reason. For the time being… ha. If I have some good taste tasters here, I might share the occasional summer cocktail, but the main thing I’m going to be doing is sharing some of my other favorite drinks and mocktails. Or maybe just a post over on Crumbs!

Sooooo let’s chat all about this smoothie. It’s one I’ve been living on for the last few months – only wanting things that are cold and icy, and especially lately since I’ve been attacked by my sinuses. Where to start? I’m going to tell you all about my current faves and what I use daily.

Pink dragonfruit – also known as pitaya – is my LOVE. I order it in embarrassing amounts from pitaya plus. I get the cubes and smoothie packets. Both are excellent! That’s the base for this smoothie. It’s sweet but sort of tart? Also, good news for you banana haters because this smoothie is banana free! WAHOO.

Currently, I am really loving this frozen fiber fruit blend. I add just a piece or two to my smoothie for some fiber fruit and sweetness, sort of like if you add a date to the smoothie. You know?!

And the other fruit I used here? Some organic blueberries. Yessssss. Give me all the antioxidants right now, especially since I can’t have wine. Fresh spinach, which I don’t always do. I do it sometimes. Sometimes I don’t!

It depends on my current vegetable situation. Like have I been eating enough veggies? Do I need more? Am I having pizza tonight? That sort of thing. The rest of the goodness:

If you’ve been reading awhile, then you know that from the ages of approximately 16 to 30, I burned myself the HECK out on protein powder. Like I would be fine to never see or open another protein powder container again. EVER. Puhhhlease just get them away from me.

HOWEVER. Last year I started using the Vital Proteins collagen peptides which is, um, in a word… amazing. First, it dissolves completely in warm liquid (like coffee) without ANY taste and smell. Or grit. I swear on my life. Trust me, if there was a taste or grit or something, I would know. It is completely tasteless! Incredible. Unbelievable. I still cringe with my first sip and am shocked to taste… nothing. So that’s one way that I used it last year.

Anyhoooo, I add that into my smoothie too (and it also dissolves) and it has tons of protein, so it makes up for my hatred of protein powder. Sometimes I will add plain greek yogurt, but over the last two weeks I have been avoiding that since I’ve had allergy and sinus issues. Eddie has been recently turned onto the collagen peptides, putting them in his smoothie every morning. He’s also a protein powder hater. Burned out a looooong time ago. I also use hemp hearts and chia seeds. I use a little flax oil too; sometimes I will use flaxseed, it just depends on what I have! Other times I will use coconut oil instead. MMMmmmm.

Occasionally, I will use peanut butter or almond butter, but I find that the pitaya + berry mixture is a little more on the tart side of sweet, and I don’t love the nutbutter as much with that. I really like nutbutter in my smoothie when there is banana, because I am an eternal five year old. For my liquid, I love a mix of almond or coconut milk and coconut water – but only the coconut water from harmless harvest! It’s the only stuff I will drink. It’s the best. I’ve been drinking it for years and pretty much survived on it right after I had Max and was OMG SO THIRSTY.

I think that’s a wrap. It’s so simple and easy, but there are certain things that I adore (like how creamy the hemp hearts make the smoothie, how hot pink it can get from the pitaya, how delicious is tastes with the frozen figs!) about this exact smoothie. I don’t make this same one every single day, but it’s a version of it. And most of my other smoothies include these ingredients too.

Trust me, I am someone who would much rather eat my food than drink it, but making a smaller one of these is a great way to pack in some amazing ingredients. And then when I want a cookie later, it’s like… balance. 29 Comments on “Blueberry Dragonfruit Smoothie. (and all of my favorite smoothie ingredients!)”