I’m making you a salad today! In wedge form, of course. Watermelon salad wedges because they are cute! And I don’t want to be all fancy and stack it. Wedges that are covered with the juiciest cherry tomatoes, crumbly blue cheese, microgreens, fresh herbs and a quick orange vinaigrette. Would you believe this is one of the most incredible combinations ever?!

And I’m not even being dramatic. I had this salad a few weeks ago at Vallozzi’s – and while it was served much fancier in stacked form with a watermelon round, the flavor was so incredible that I couldn’t believe my taste buds.

Even my mom, who would totally turn her nose up at something like this, something very untraditional and something that meshes sweet and savory without being a dessert, was LOVING it. We only got one salad and we were practically fighting over the last few bites. I don’t even know how to begin to explain how fantastic this flavor combination is. We have the watermelon, which is sweet and refreshing. The tomatoes, which aren’t quite as sweet, but also juicy and somewhat refreshing. The blue cheese, which is creamy and kind of tangy. The microgreens, which always have a little bit of a bite to them – not quite as peppery as arugula, but there is something semi-spicy about them.

The salad we had that evening also had fresh garden peas, and while they tasted good too, every time I speared one it flew off my plate and hit the wall next to me.

Yes, I was that person. There was a pile of peas on the floor before I even finished the salad.

The peas were a little underwhelming to me so I left them off these slices. But here’s the thing! The entire combination is drizzled in an orange vinaigrette. The salad we ate? I think it just had a plain, simple orange oil over it. And guess what! I don’t even care about orange-flavored things. I mean, it’s not that I don’t LIKE it, it’s just never a flavor I gravitate towards and it’s always one of the last flavors I’d choose.

Unless we’re talking about the old-school cinnamon orange rolls from a can on Christmas. You know. Super classy. Like this bread. However, that freaking orange oil MADE this salad. Wow. It gave the salad this wonderful brightness and added an even MORE refreshing taste which seemed impossible at that point. It was just so, so delicious and even though we ordered some of our other favorite dishes, we kept talking about this salad all night long.

P.S. this was before we went to the James Taylor concert (be still my heart) and Bonnie Raitt opened up for him and while I didn’t really know anything by her, I hope that when I’m almost 70 I can be jumping around a stage and singing at the top of my lungs. Also, the concert consisted of me and tens of thousands of baby boomers so that was cool. But you know. I knew that I wanted to make this salad at home before the season was over. But I also knew that it wasn’t practical at the time to stack it and make it all pretty and I just really wanted to get these flavors out into the universe and back into my mouth ASAP because I’m a selfish person. Enter my favorite way to eat watermelon: pizza style! Or, um, sliced triangle style. If you’re someone who always wants to strangle the person that calls watermelon wedges “pizza,” I get it. I get you on a deep level.

And if you’re thinking that these toppings like rather… meager, compared to my usual trashed up ways, it’s because these little bites are all you need. These flavors together and so fabulous and fresh that you don’t want to overdo it. For once. And I very much believe in MORE IS MORE. 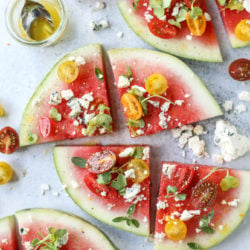 These colors though, right?!