Welcome to my newest obsession. Spicy pineapple wedges that might make your brain explode!

And your taste buds. In a good way, of course. The sweetest, juiciest pineapple you can find. Honey infused with hot peppers for some spice. A leeeeettle sprinkle of smoked paprika because for ten years running it’s been my favorite spice. And a heavy-handed toss of crumbly feta cheese over top. It’s tangy and cooling and savory and perfect.

Right there on that plate? It’s everything that I had no idea I wanted. This hot honey is my version of hot honey made with jalapeño peppers, because well… that’s what I had on hand! Heat is heat to me (because I don’t love heat!) and I couldn’t imagine infusing this honey with habaneros, so jalapeños it is.

It still has a major kick! Trust me!

A few weeks ago I saw a similar idea in bon appetit and got a major craving for it. I made it as the recipe specified and while it was good, it just needed a little something extra. At least for me. Probably because I don’t love cayenne. Even though the pineapple was sweet, I needed even more sweet with the spicy because I’m a crazy person. This is obviously embarrassingly easy but I am obsessed with the idea because it’s just so different. You can prep it and take it to a party (we still have a few hot weeks left!) in no time at all and it’s just such a NEAT dish.

I feel like that was something written in my eighth grade diary or something and I can even see it in bubble letters with doodles and hearts around it. And neon. But it’s true. This is neat. At least I didn’t say neato.

I also love that it can be an appetizer, a party snack or heck, even a dessert. Am I pushing the limit here? Have I disappointed you because I have so many times before claimed that fruit like this would NEVER EVER EVER be dessert? At least not legit dessert?

I’m sort of changing my tune, but only for this! I SWEAR. On the moon and the stars and the sky. 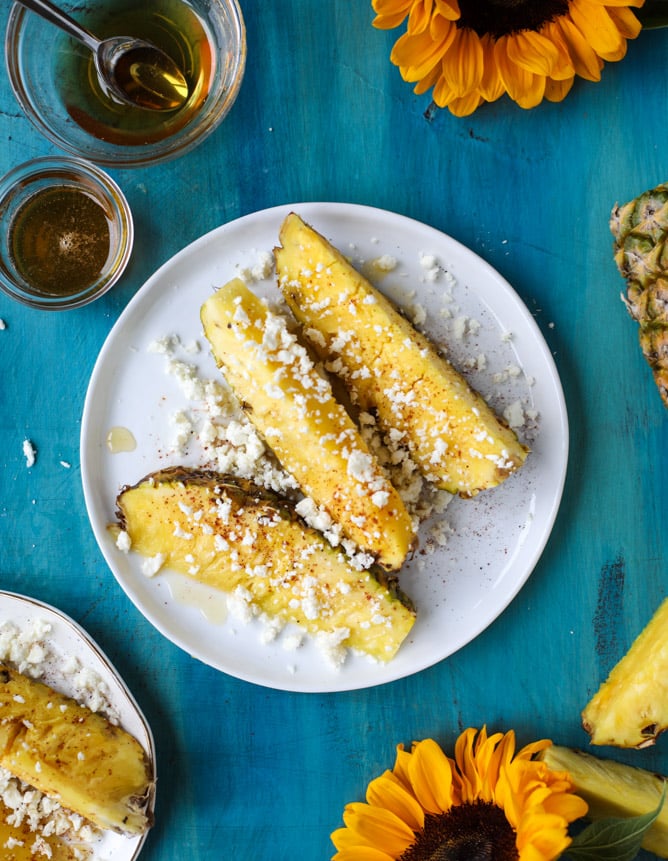 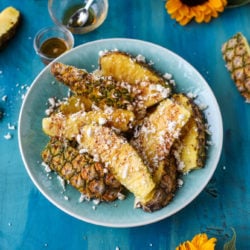 p.s. if you really wanted to get crazy, you could grill the pineapple. Ooooh yes.