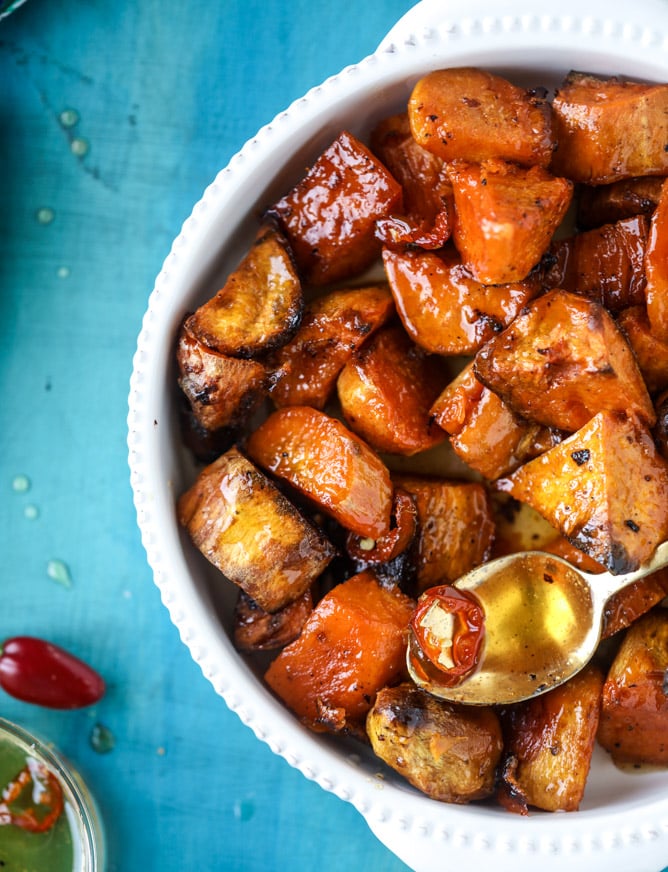 Sweet potatoes and I have had a tumultuous relationship in 2017. We were on a sweet potato kick in January and then I got flu, which made me want to eat NO sweet potatoes ever again. Shortly after that is when I got pregnant and sweet potatoes were very high up there on the can-not-consume-without-dying list. Not only did they just not sound good, they sounded horrific! It took months and months before I would eat a sweet potato again – before I’d even be remotely interested in one.

But this recipe… ahhh. It sold me easily. Back at the end of the summer I got on a big hot honey kick. I first drizzled it over pineapple wedges (um, with cheese! Yes!) and had some leftover so we started using it on all the things. I tend to shy away from spicy foods because I have a wimpy palette, but something about the heat combined with sweet? I’m all over it. As long as it’s not toooo much heat.

Or two much sweet. These sweet potatoes get super caramely in the oven. They are totally NOT a traditional Thanksgiving recipe, in fact I’ve made them just for dinner a billion times since late summer. But if you want to try something different for Friendsgiving or just want to spice up (uh, literally?) your sweet potato dinner game, these are where it’s AT.

One of the downsides is that they really do need to be made and served immediately. Or relatively quickly. You know how roasted sweet potatoes can turn to mush as leftovers? I mean, you might still eat them and deal with it, but they are fairly mushy?

Yeah. Trying to avoid that at all costs.

But the truth is that it’s not that difficult, because the second these come out of the oven, you’ll want to devour them! Can’t you just SEE the flavor?!