[This post is sponsored by Rodelle! I loooove their vanilla extract and it’s my favorite baking ingredient for these pumpkin brownies!]

Let’s talk about how to make friends this fall. 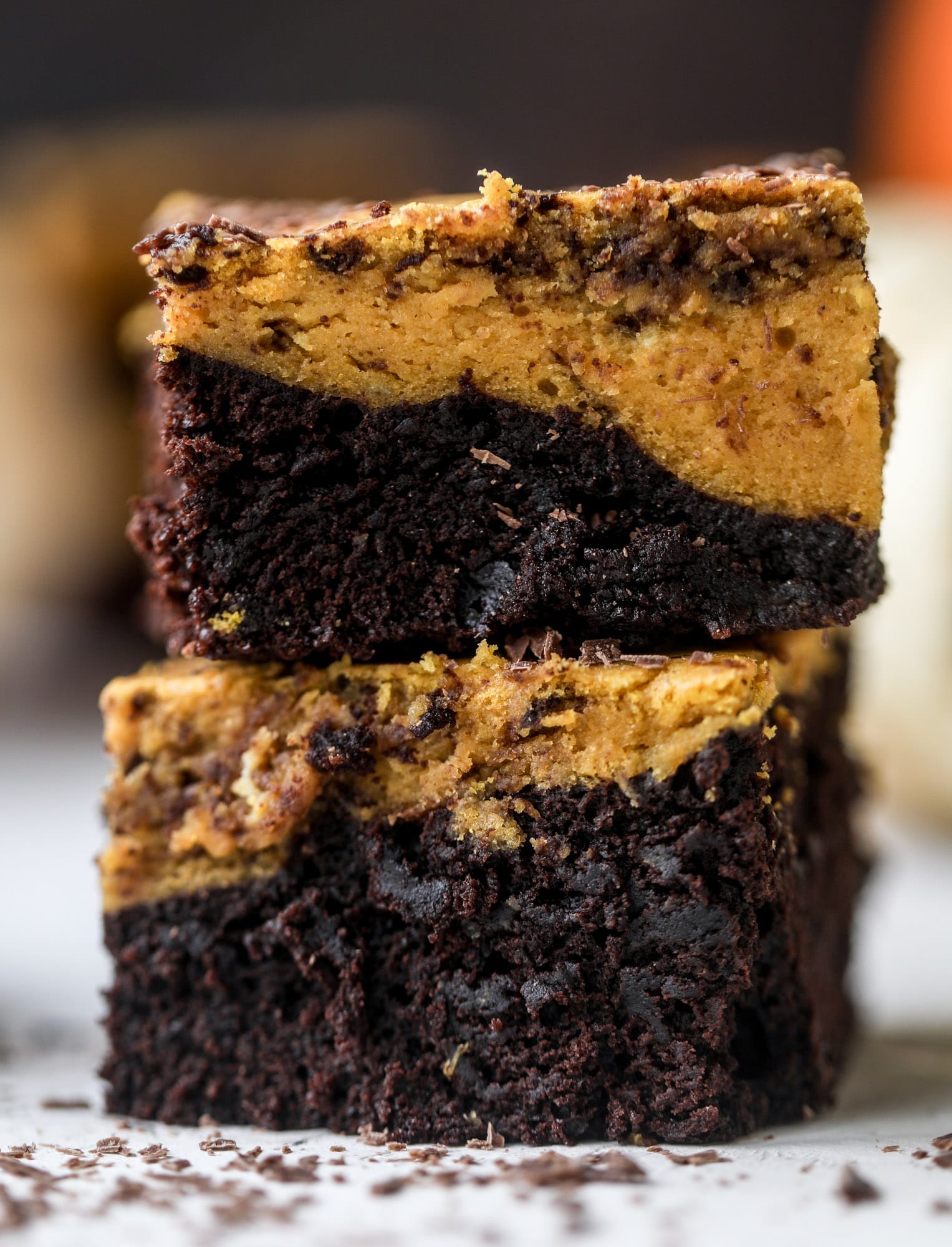 Serve some pumpkin brownies to everyone you know! Pumpkin fudge brownies, to be exact. They are a guaranteed conversation starter.

We are brownie lovers in this house. Actually, Eddie is more of a brownie lover than the rest of us. Sometimes on the weekends he makes a pan of brownies for himself! The thing is that we are not brownie snobs by any means: these days we find ourselves making a box mix and it’s not like it’s terrible? When it came to pumpkin brownies though, I had to go all the way. But I may have ruined that easy brownie hack for us because this homemade brownie recipe is GOOD. These are fudgy and not cake-like (which is what I always prefer!) and then the pumpkin layer? Ooooh. It’s wonderful. The only downside here for us is that Eddie *thinks* he doesn’t like pumpkin. A few weeks ago I made these brownies and then went out for the evening. I gave a bunch away but there were some left, sitting on the counter wrapped in the baking dish. Eddie texted me a photo and asked WHAT ARE THESE?!

I alllllmost didn’t tell him there was pumpkin inside. He was dying to have one but could kind of tell that it was pumpkin by the slight tint of orange. He must have been checking just in case? Who knows. Maybe he thought I lost my marbles (not a stretch) and made butternut squash brownies? Don’t tempt me. That may not be that far off.

So I was nice and truthful and told him that they were pumpkin fudge brownies, leaving all trickery aside. He didn’t take the risk of trying one which means I was then left with sooo maaaannnny browwwwnies. I guess it’s a good problem to have?

Today I’m partnering with Rodelle again to tell you about their amazing vanilla extract and organic cocoa powder. This is the third year we are working together and I can’t even express how much I love these products. Their vanilla is top notch and their cocoa is just insane. You will love it! I swear this cocoa is what makes the pumpkin brownies so darn good. And you know that I’m kind of light on the spice, because when it comes to pumpkin, I’m not a huge lover of spice. The pumpkin flavor though? I’m all over that.

I actually think Eddie could take a bite and love them. He may realize it’s pumpkin-flavored after the fact. 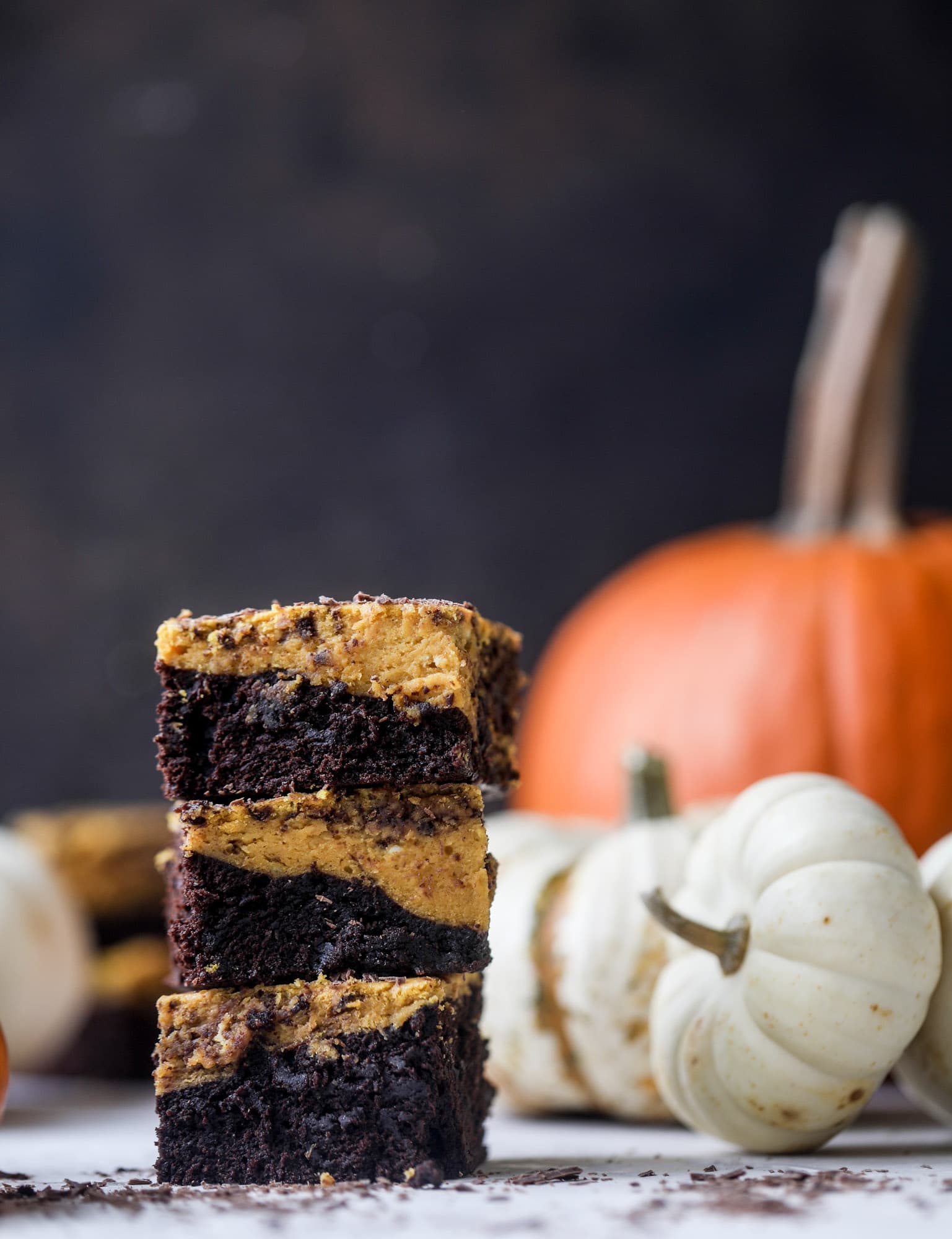 I’m realizing that my exclamation point usage is a bit insane in this post. It’s necessary though.

Because here’s the thing!

I love this treat for Thanksgiving because you can make it ahead of time. It’s not as fussy as pie if you’re a newbie to pie and you can sort of make these and forget about them! You can even make them a few days in advance and store them in the fridge. If you go that route, I would store the entire pan, unsliced, in the fridge until the morning of your meal. Remove, slice and let them come to room temperature.

Super easy, right? And you have so much more time to focus on fun entertaining things. They are a dream come true! 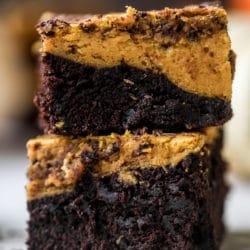 Yield: 12 people
Total Time: 1 hr 30 mins
These pumpkin brownies have a fudgy layer of chocolate on the bottom and a silky layer of pumpkin on top! They are so delicious and rich and perfect for fall. The pumpkin brownies come together easily and can be made ahead of time too!
Print Recipe Pin Recipe
4.86 from 41 votes
Leave a Review » 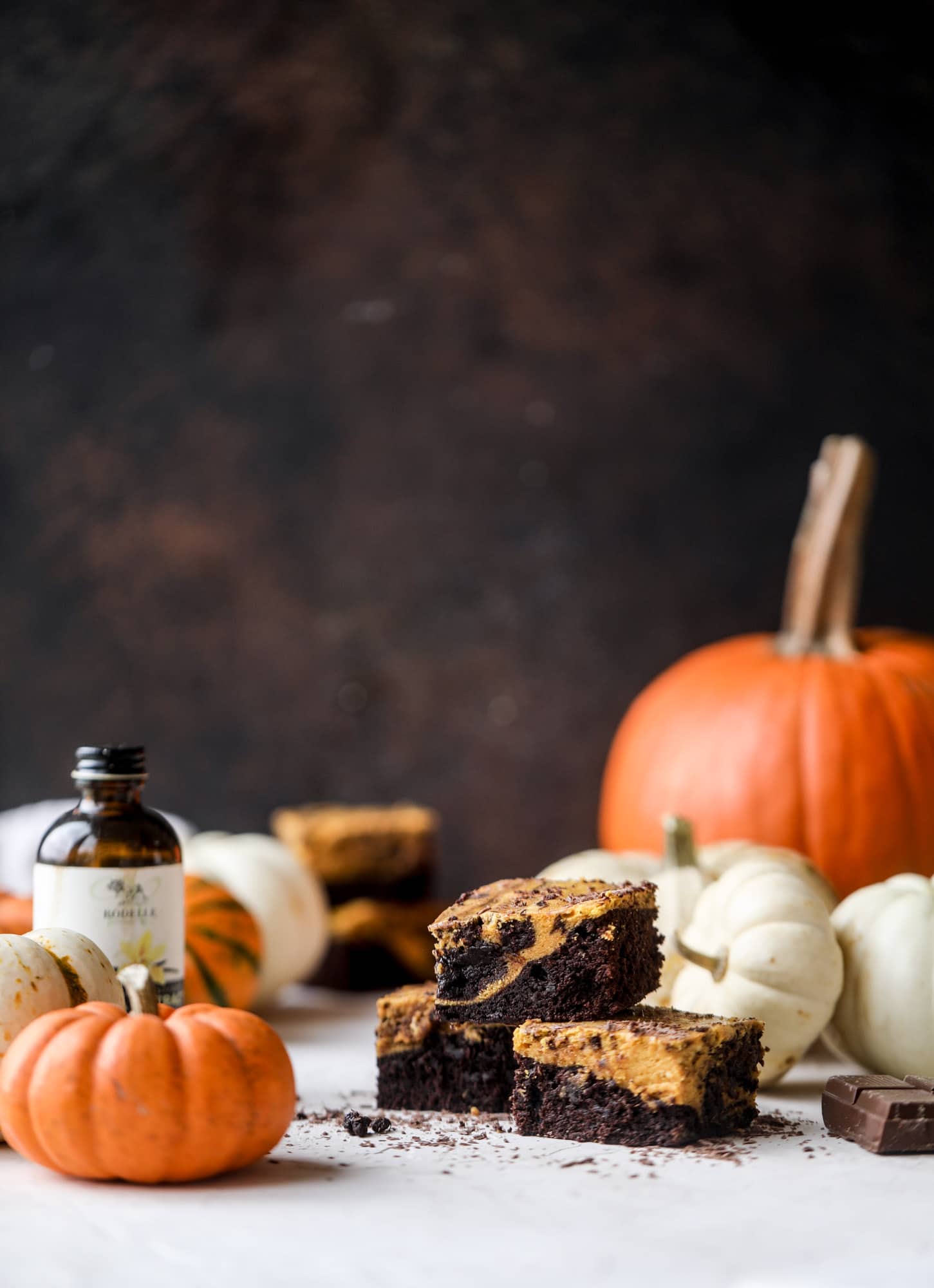 The swirl just makes me so happy.

« Previous PostJoin Us for The Pretty Dish Book Club in November!
Next Post » life with emilia: one year in.