YOU GUYS. We must discuss this one pot pasta. YES. One pot. Everything can be made in one pot. It’s delicious. Unreal.

If I told you how many times I’ve made this over the last six months? You won’t even believe me. It might come in there around 20. 20 freaking times. Isn’t that nuts?! Also. Huge news: Eddie doesn’t love this. I can’t even believe it, because it is SO good. This was only one of my two cravings during pregnancy after I made it for the first time. The second craving was a Pittsburgh-style salad with French fries on it (ew gross or amazing?). And the love for this has stayed put.

I started making a version of this while pregnant – Amy’s easy chili mac. Before that, I probably wouldn’t have even been interested in a recipe like this. Pregnancy does weird things to you. And it was so good… but I realized that I could do without the beans AND pasta (even though I do love beans in chili) and then eventually, wondered if everything could be made in ONE pot.

That’s how we got here. But anyhooooo, back to why Eddie doesn’t like this. It’s not that he doesn’t LIKE this. He does LIKE it. He thinks it’s okay. I’m just being dramatic. But it’s really all my own fault why he’s not bananas over it like I am.

When I first made it months ago, I texted him and said that I had made a chili pasta for dinner. He took that to mean that I made chili AND pasta… and he thought he was going to be able to spoon chili OVER his pasta. And that was that.

Ever since? He can’t get into this one pot pasta. It’s not what he calls “chili pasta.” So the whole recipe is ruined (ruined!) for him.

For the record, chili over pasta is just… okay in my eyes. I find it almost bland, so the only way you’d even find me eating something like that is with copious amounts of cheese stirred in. Sort of like this! 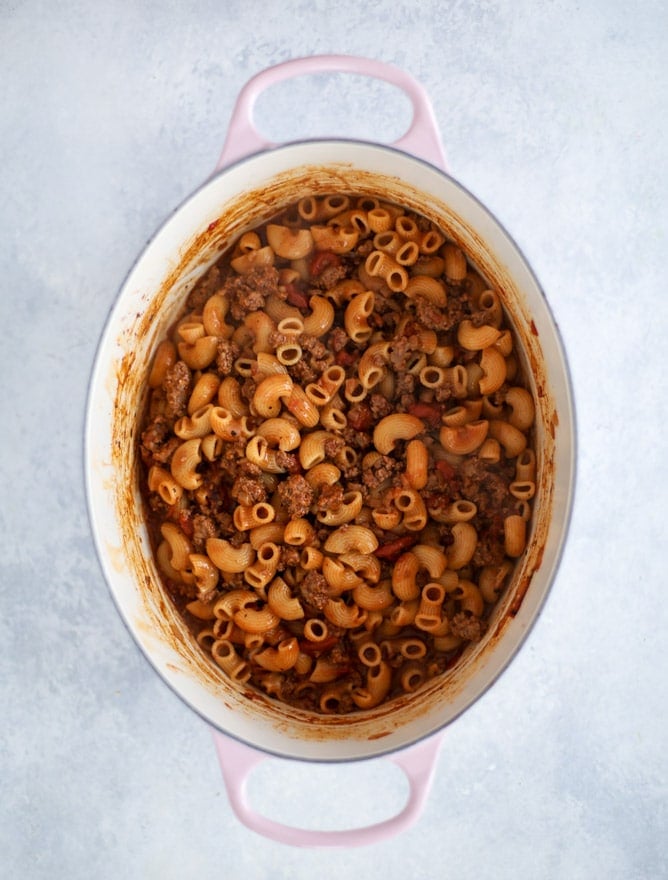 Also, during a very low moment of my life (like two weeks ago when I was sleep deprived), I didn’t eat this like a normal person. I SCOOPED IT OUT OF THE BOWL WITH TORTILLA CHIPS.

That basically means that I ate pasta nachos. I scooped up pasta with tortilla chips. WTF is wrong with me. (Besides nothing, because that’s delicious?)

I have wanted to make another one pot pasta for AGES. I made this mushroom swiss chard version back when Max was born and it is a true favorite. I’m still amazed that you can toss all this junk (especially the dry pasta!) in a pot and have it come out as an actual meal. Whaaaaat. It’s just mind blowing.

It’s truly the ultimate comfort food. I adore it. It doesn’t take very long and it’s super flavorful. I also usually use whole wheat elbow noodles but I had these cute macaroni noodles from Trader Joe’s leftover from Christmas. Fun to make too! 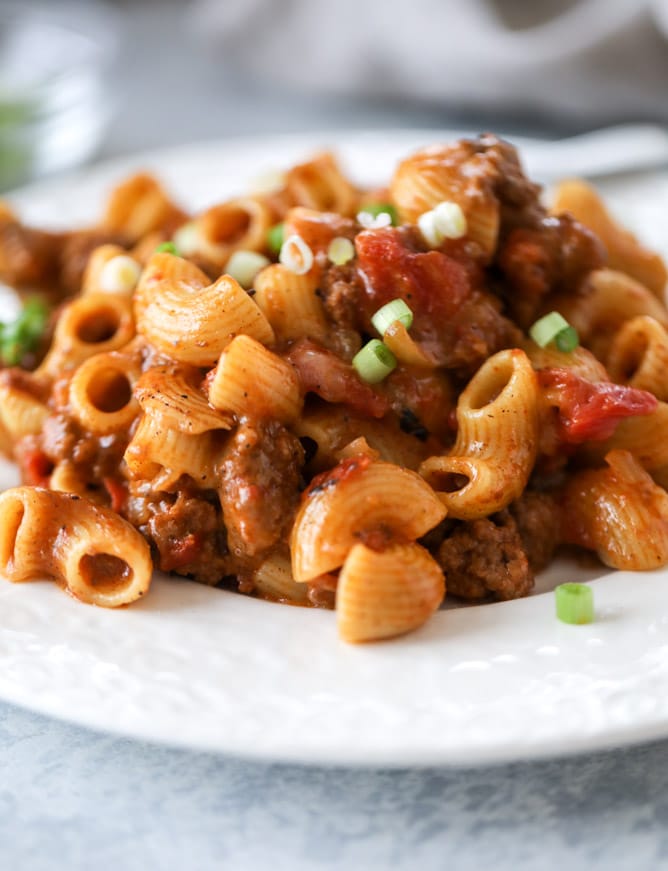 Take a peek at my video for one pot chili pasta! 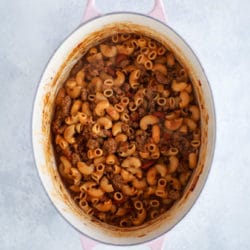 « Previous Postlife with emilia: ten weeks in.
Next Post » Currently Crushing On.