[This post is sponsored by Kitchen Basics stock! In 2018, I’m teaming up with them to share some delicious recipes that I can’t wait to tell you about!] This is the best way to come out of the winter funk. You know, the January and February winter funk when the holidays are over, but it’s still super chilly outside and just… generally gray and gloomy? We’re breaking out of that with a fabulous, warming lemon chicken soup that will take you minutes to make.

This lemon chicken soup is one of the EASIEST soups I have ever made. Ever ever! And it’s super packed with flavor thanks to the Kitchen Basics Turmeric and Ginger Chicken Bone Broth that I added to the stock. This stuff is like liquid gold. Oh my gosh – guys, we are LOV.ING. it. It is so super flavorful. I know that bone broth is really trendy right now and that people even sip on a warm cup of it morning, noon and night (Eddie just about died when I suggested that) and while I don’t have much desire to drink it on its own, I love using it in recipes. It adds an extra boost of oomph.

Especially this one! First, the flavor. Holy flavor bomb. This little carton of chicken bone broth has turmeric, ginger and lemongrass. I ADORE all of those flavors and even used some of this in my chicken and dumplings recipe the other night. It’s so, so good. Next up – I’m putting it in some homemade ramen. For sure. Second, the protein. This carton has TEN grams of protein, so obviously that was how I sold Eddie on sipping it. Of course. The minute he saw that, he was in. And when I saw it, I was super impressed and shocked. Let’s just talk about how quick and delicious this soup is. I made the soup with leftover shredded chicken that I had from roasting a whole one last Sunday night. But in a pinch, I would just use shredded rotisserie chicken. You can grab one on the way home from work and have this made in about 30 minutes. Or you can use any sort of leftover chicken you might have from other recipes during the week! Make is simple. To keep things semi-traditional, I used a sweet onion, carrot and celery. YES. We all know that I think celery is the worst, but I can handle it in soups and stews. That is it. Otherwise, peace out celery.

Also, some ginger and garlic for ZING.

But! I added in some fresh lemon zest with the veggies while they were softening in the butter too. The chicken, stock and bone broth went in next with an entire sliced lemon for even more lemony flavor. Then! Comes the pasta. This isn’t a necessary step, but one I took to bulk it up for us a bit. And because the soup without pasta would leave Eddie ravenous after, like, 13 minutes. Ditalini was my pasta of choice, mostly because it’s adorable, but also because it’s simple. It cooks quickly since it’s a small cut of pasta AND Max loves it and can easily grab it with a spoon since it’s tiny. I love a hearty spoonful of soup.

On top, I love tons (like, TONS!) of fresh herbs and shaved parmesan cheese. Then lots of crackers or bread for dipping. Can’t go without that. Words can’t even express how much I adore this. It’s warming and comforting and soothing and weirdly enough, a bit refreshing! It’s like a hot hug in a bowl with a slight hint of Spring. Which we soooo need right now. Am I right? 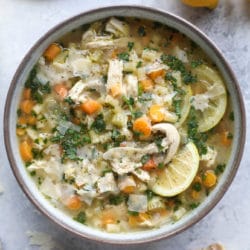 Ooooh and that melty cheese on top.