[This post is sponsored by ALDI! I’m working with them this holiday season to create some delish recipes starting with this Brûlée Pumpkin Pie!] 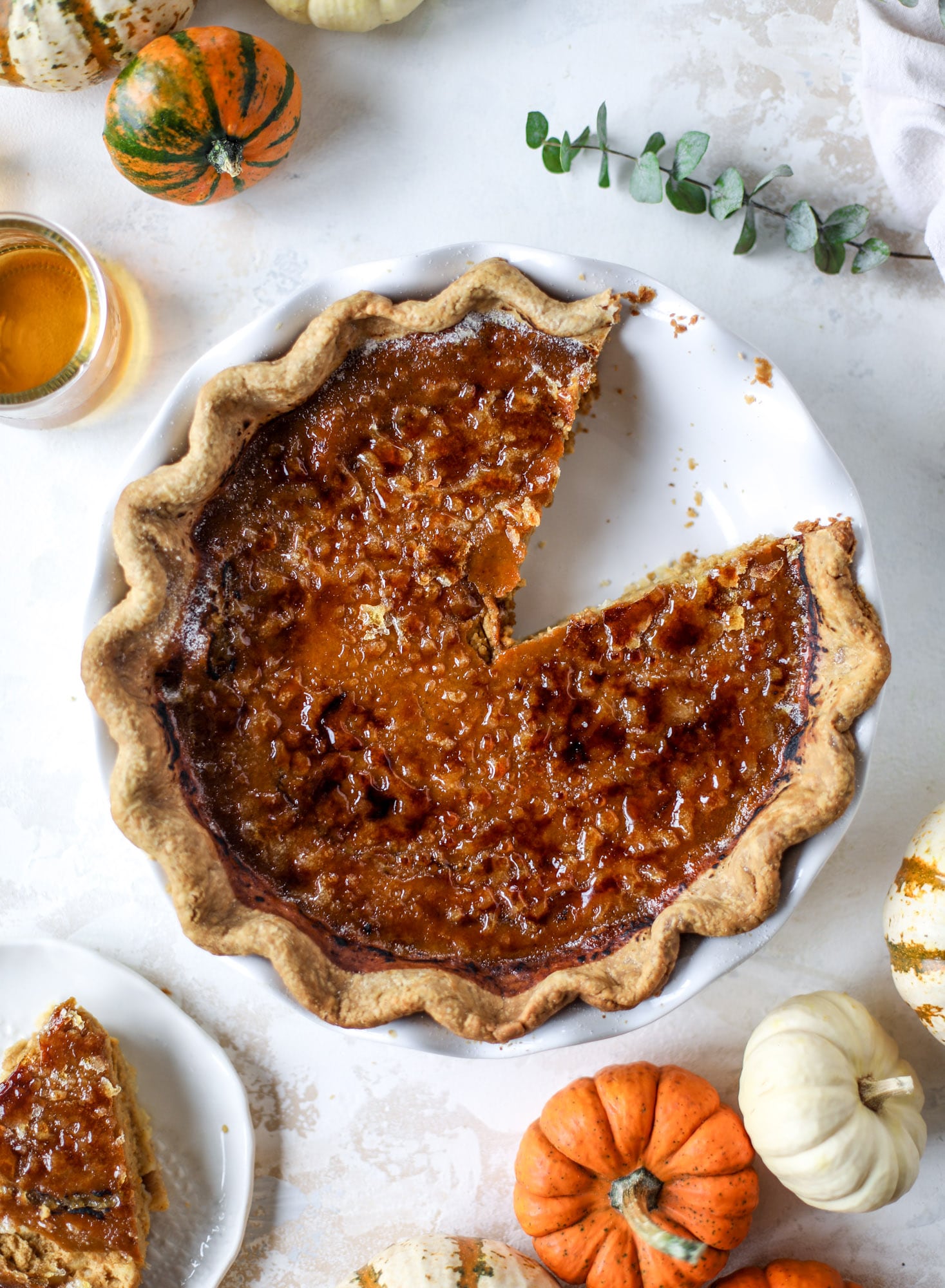 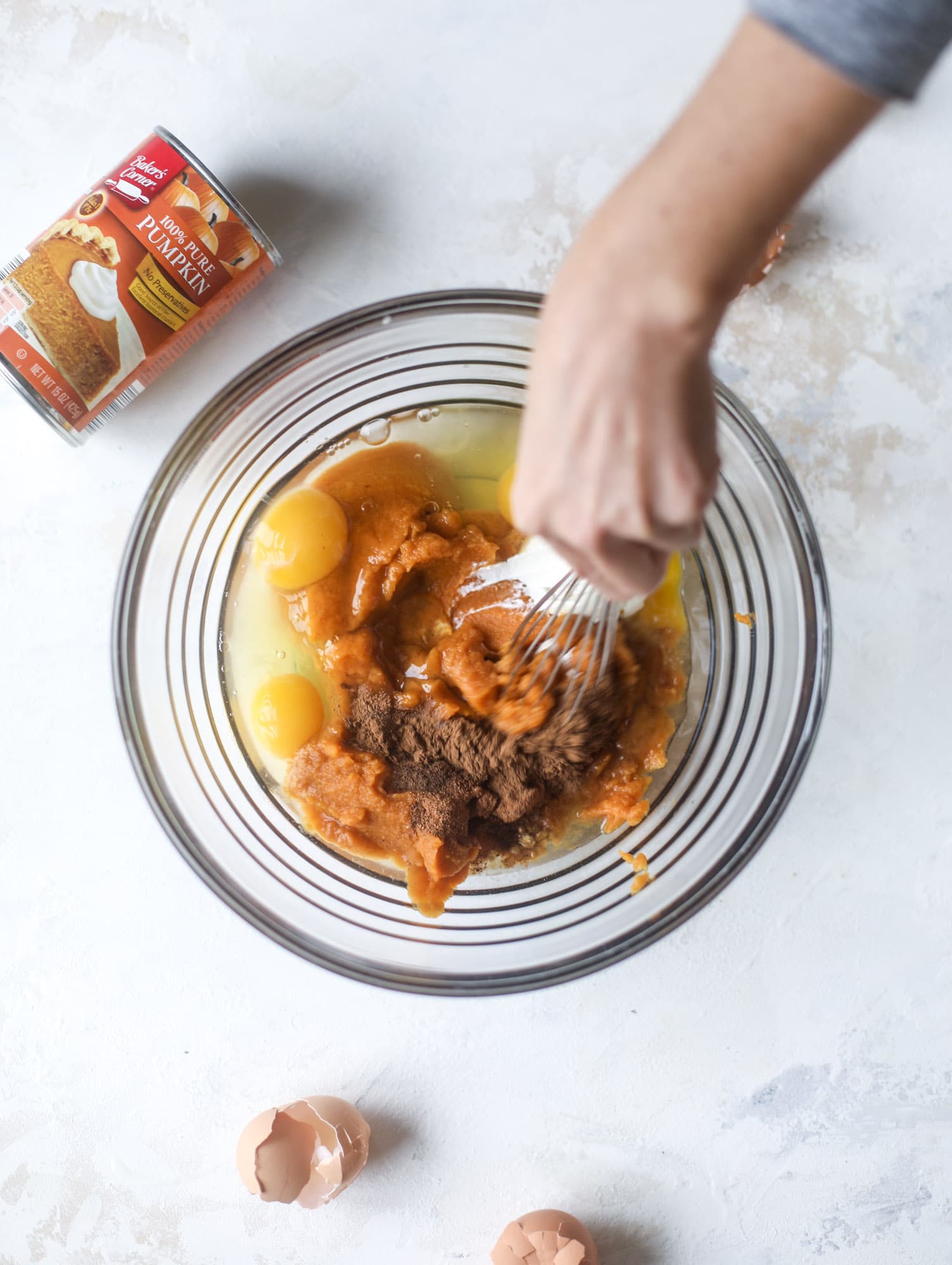 I am so excited to be partnering with ALDI this holiday season to share some delish dishes! First up, bourbon brûlée pumpkin pie.

This might be the pie to make you love pie. It’s creamy and delicious when chilled, but also somewhat light. And has a crunchy texture on top that is mind blowing. I’m living for it right now. 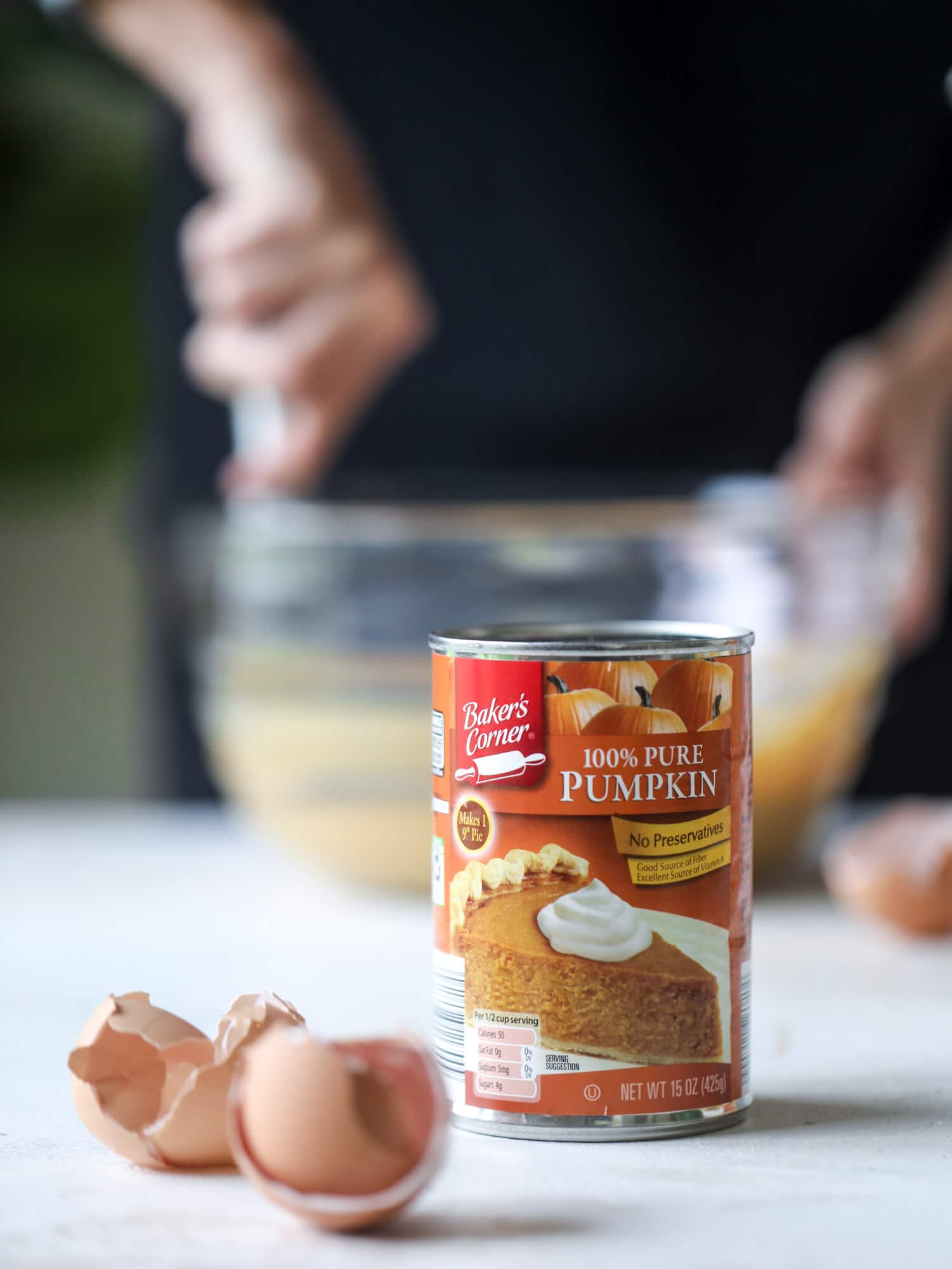 ALDI is so close to us – it’s, like, literally in our back yard. I can find every baking ingredient there that I need, so I used the Baker’s Corner All-Purpose Flour for the crust, and the Baker’s Corner Granulated and Brown Sugars for the filling. I also used the Baker’s Corner 100% Pure Pumpkin! I stocked up like CRAZY for the rest of my holiday baked goods too. This week I’m doing a massive cookie photoshoot and have been baking alllll weekend.

While the pie looks kind of special and fancy (um, of course it is!), it uses regular everyday ingredients. I was surprised at how easy it is! 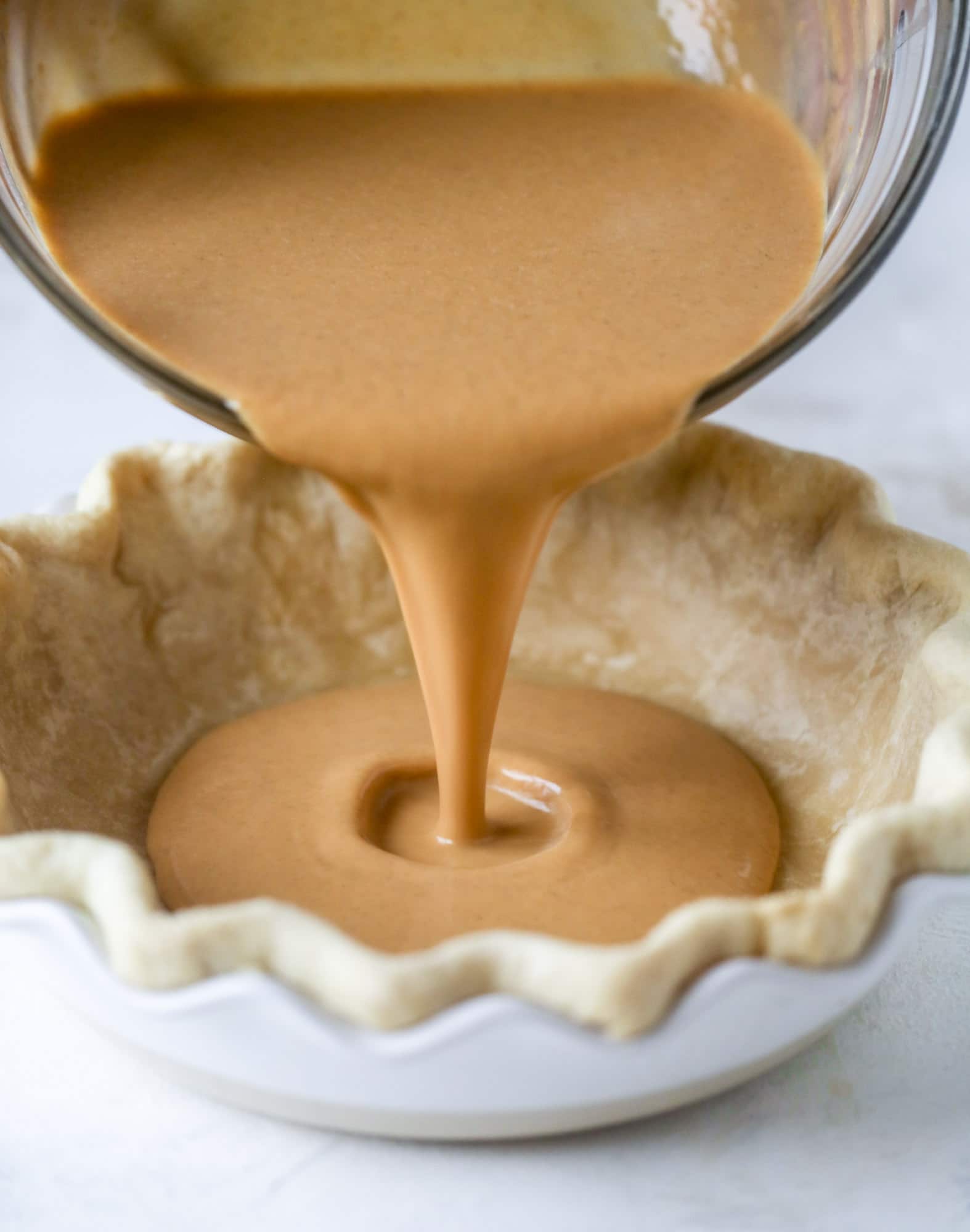 And the pie needs no topping because the top is brûléed. YES. It is made with crunchy, crispy sugar that creates the most delicious sugar shell. It’s downright irresistible. 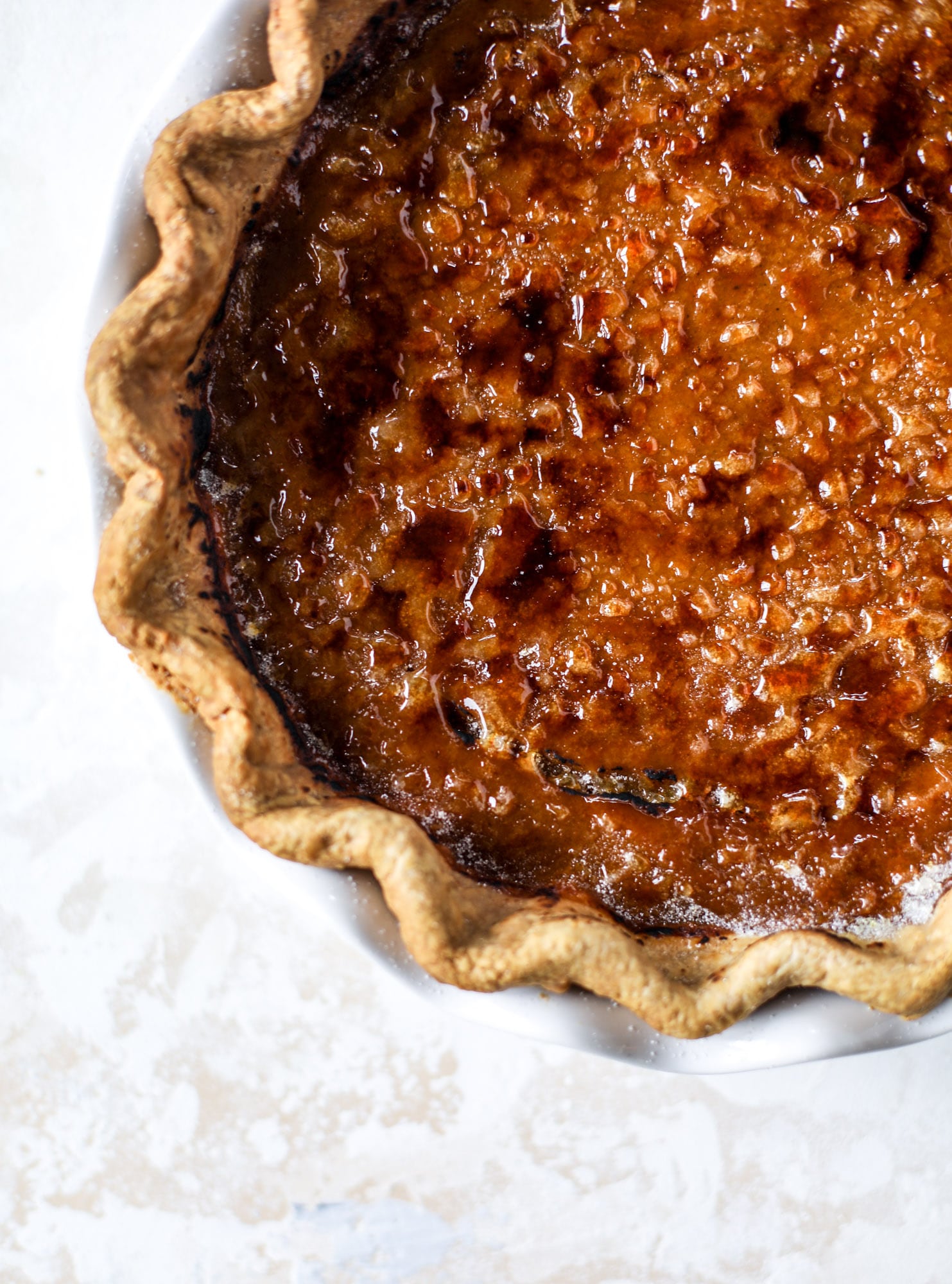 This is crazy because crème brûlée has never been my ride or die dessert. For so many of my friends, it’s their absolute favorite. Like last meal worthy for them.

I enjoy crème brûlée, but it wasn’t until I came across the idea of a brûléed pumpkin pie that I was SUPER into it. This is one of those desserts that I couldn’t get out of my head. I became obsessed.

It was different. It was fun. But not too crazy that my very traditional Thanksgiving meal family would complain.

I know, I know. We discuss it every single year but I love Thanksgiving to be the regular old school traditional dinner. I’d like one or two dishes that may be a bit extra, but my family won’t touch anything that isn’t a classic. So that’s the other reason I love this. It’s traditional enough with just a touch of excitement. 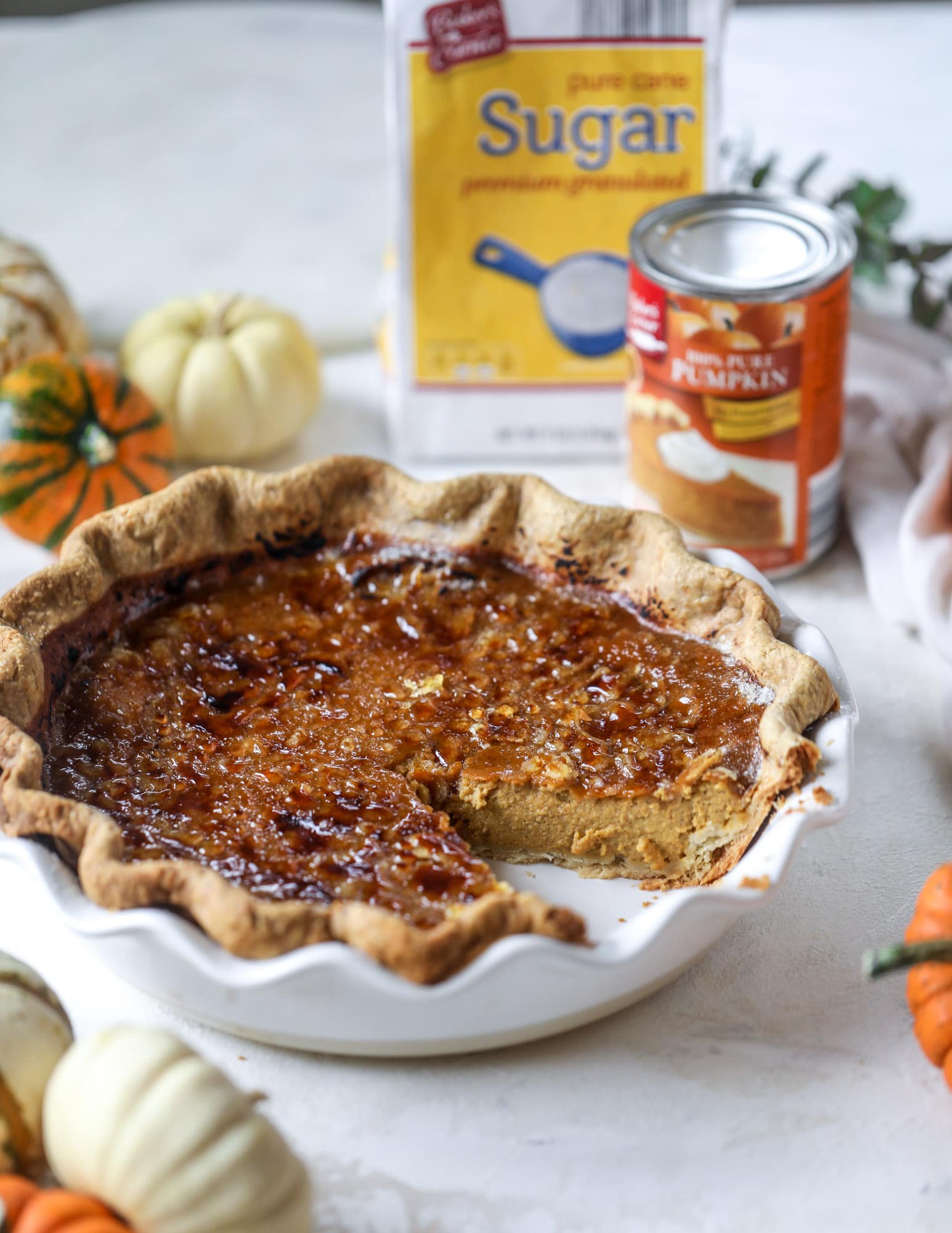 Embarrassingly, I almost always just buy a pumpkin pie on Thanksgiving. Mother Lovett used to make a pumpkin custard pie and it was pretty good, but it was very heavy on the spice.

I’m totally ruined now though. This pie is SO freaking good. Now on top of all the other dishes I like to make for Thanksgiving, I have to make this pumpkin pie too.

This pie is so delish that it’s not even a question. I’ve got to make it.

The good news: you can make it a day or two ahead of time and brûlée the topping right before serving.

The bad news: it may never last a day or two in your fridge because it’s impossible to stay away from. You’re going to love it. 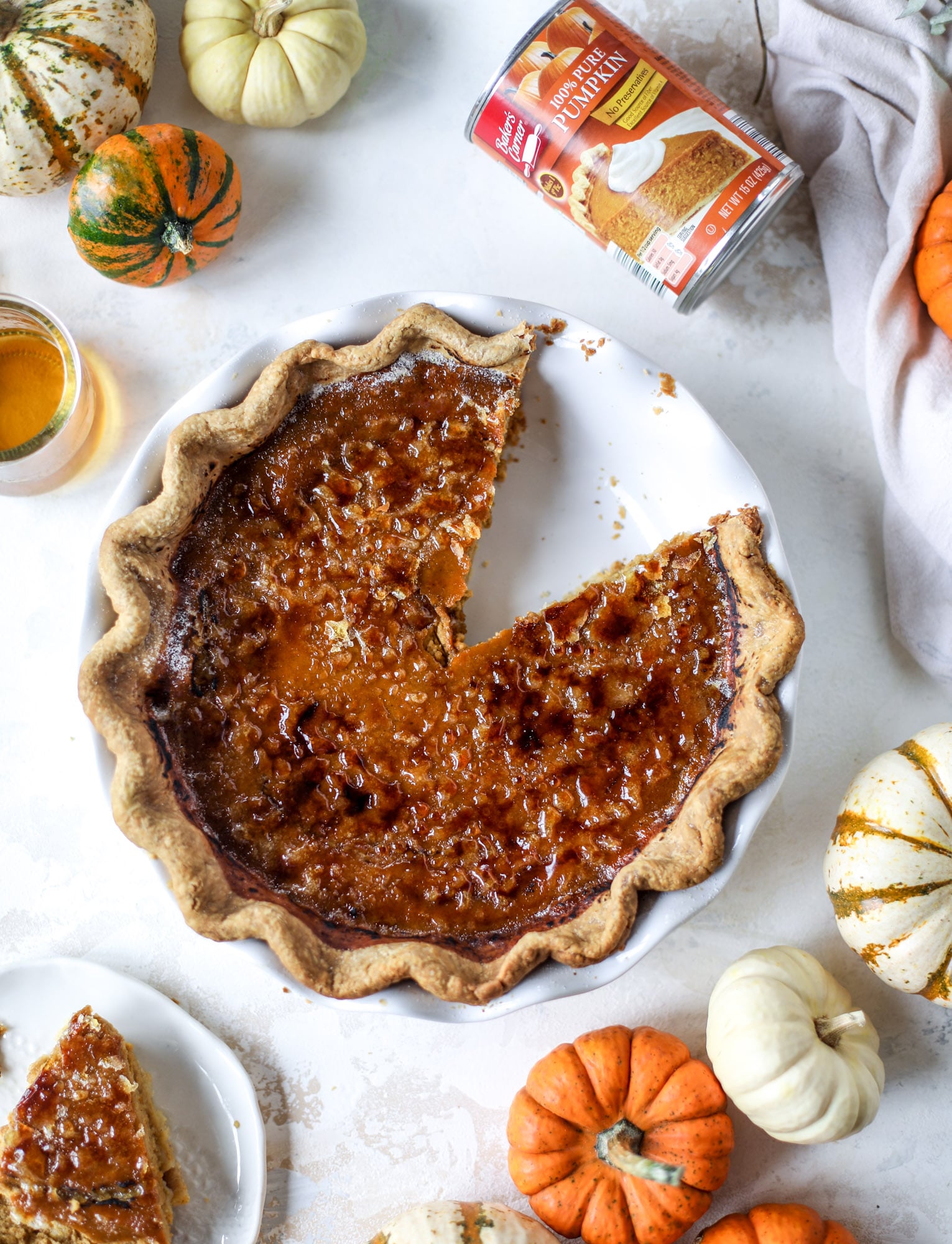 I’ve becoming quite the pro at Mother Lovett’s pie crust. I almost went the graham or pecan route for this crust. But her regular old crust was the best option and holds the pie so nicely. I used the technique of baking it first, then brushing it lightly with egg white. This creates a barrier in between the crust and the filling so the crust won’t get soggy. When I discovered this, I was blown away.

So much of my anx-pie-ety comes from the bottom crust not being finished and getting a super soggy result. This is pie hack GOLD. 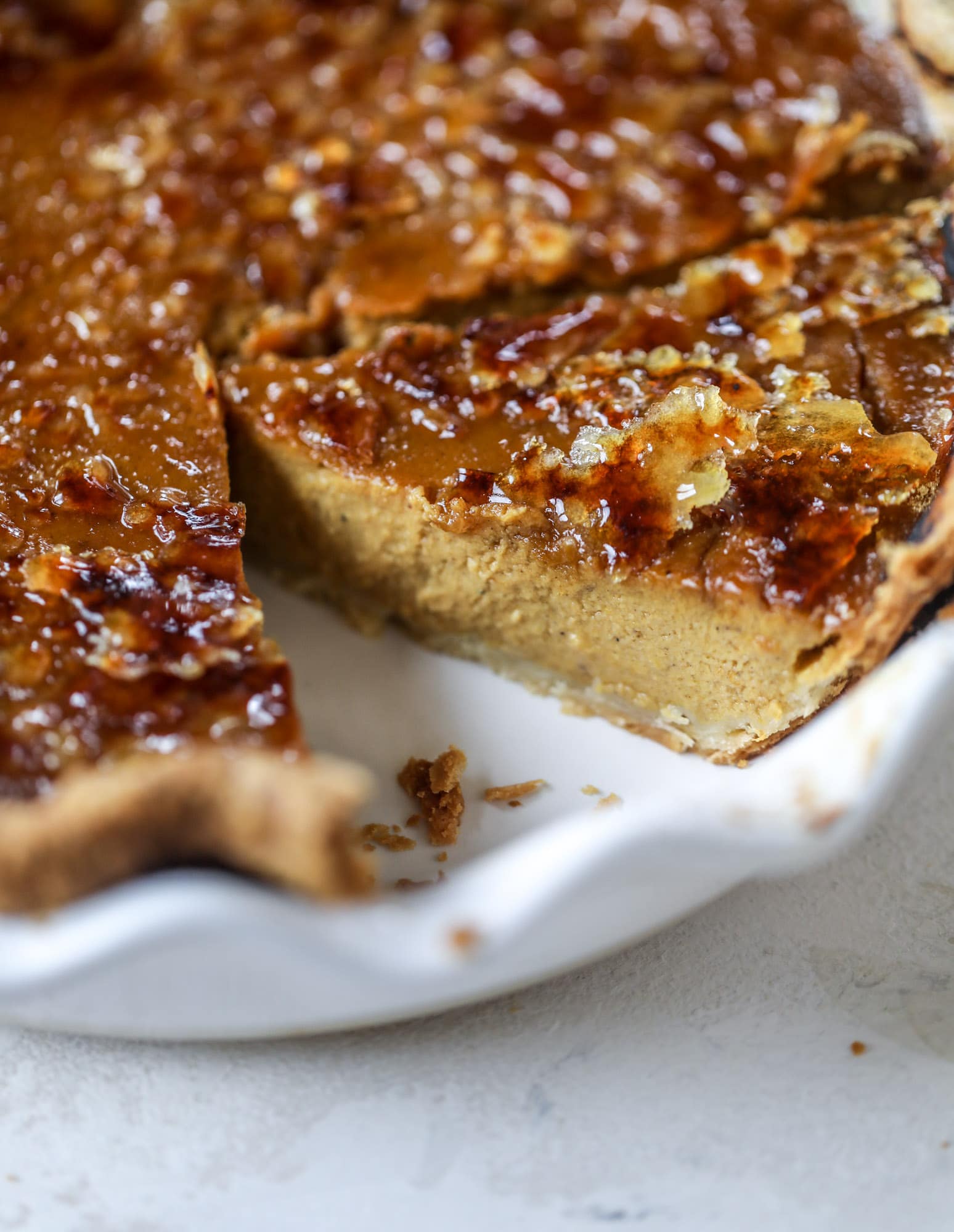 With this successful brûlée pumpkin pie under my belt now, I’m also obsessed with this idea of making mini versions too, because I could easily pack those up for my family to take home after Thanksgiving dinner. 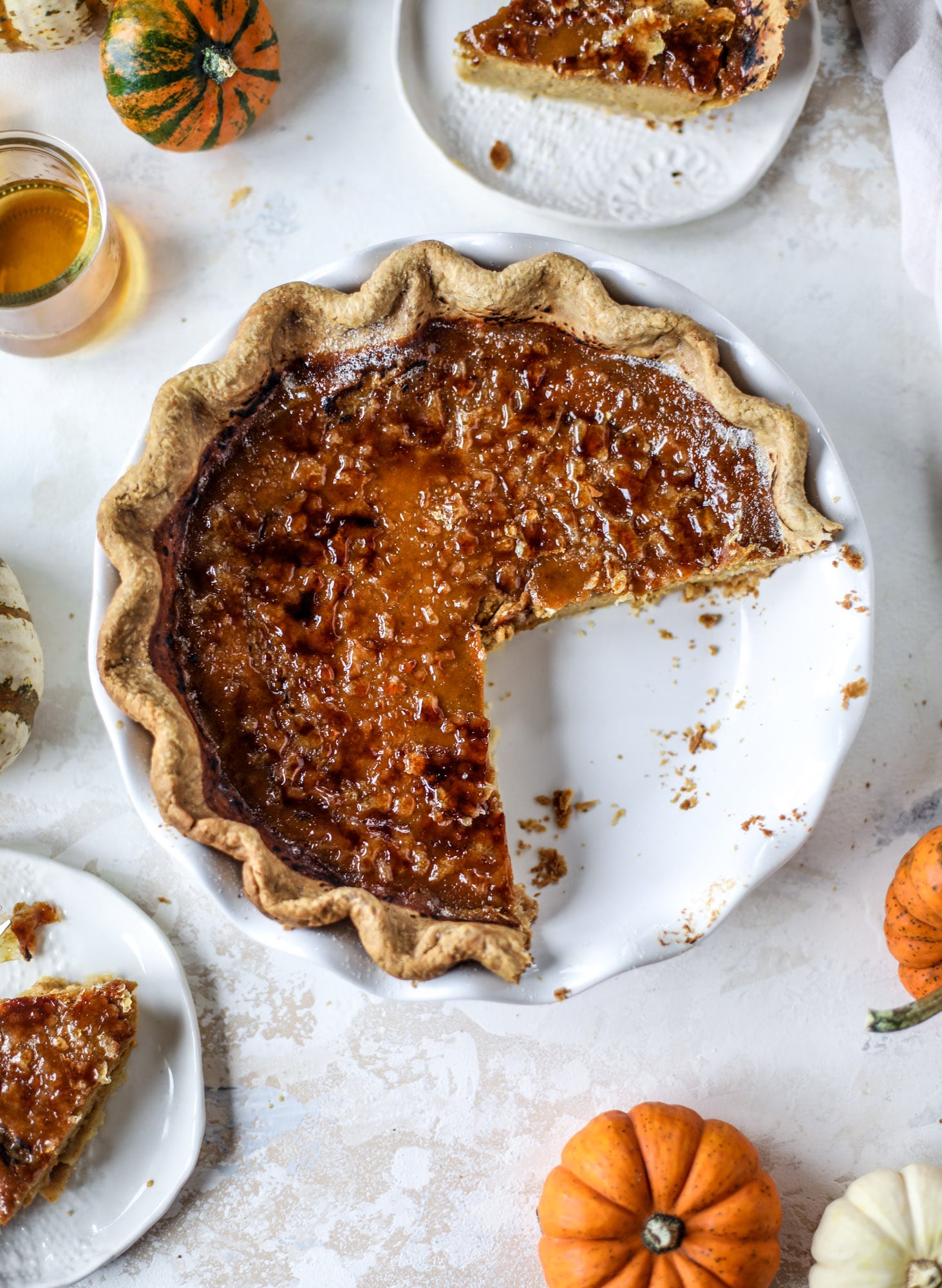 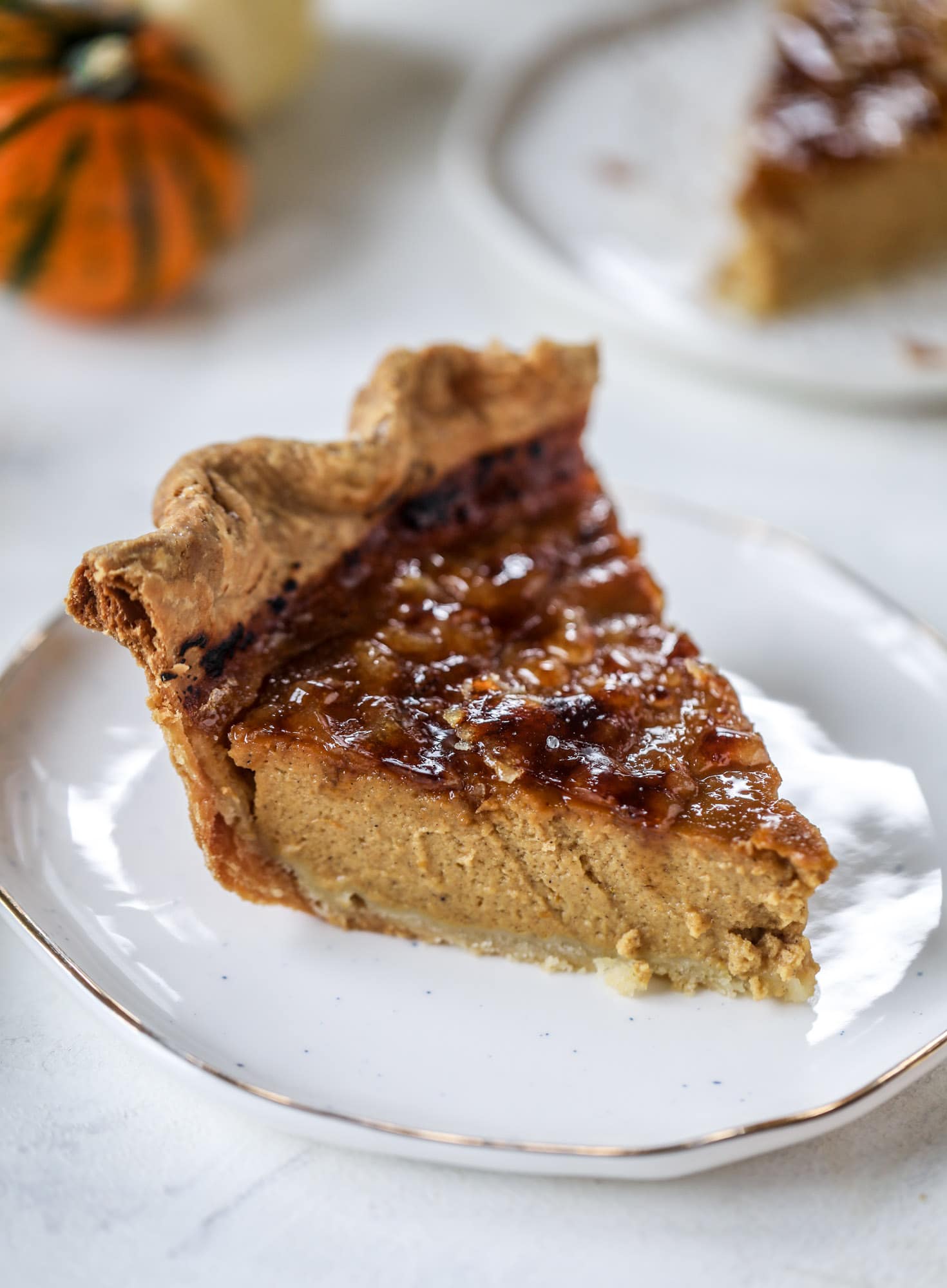 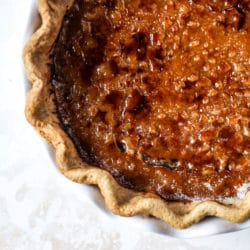 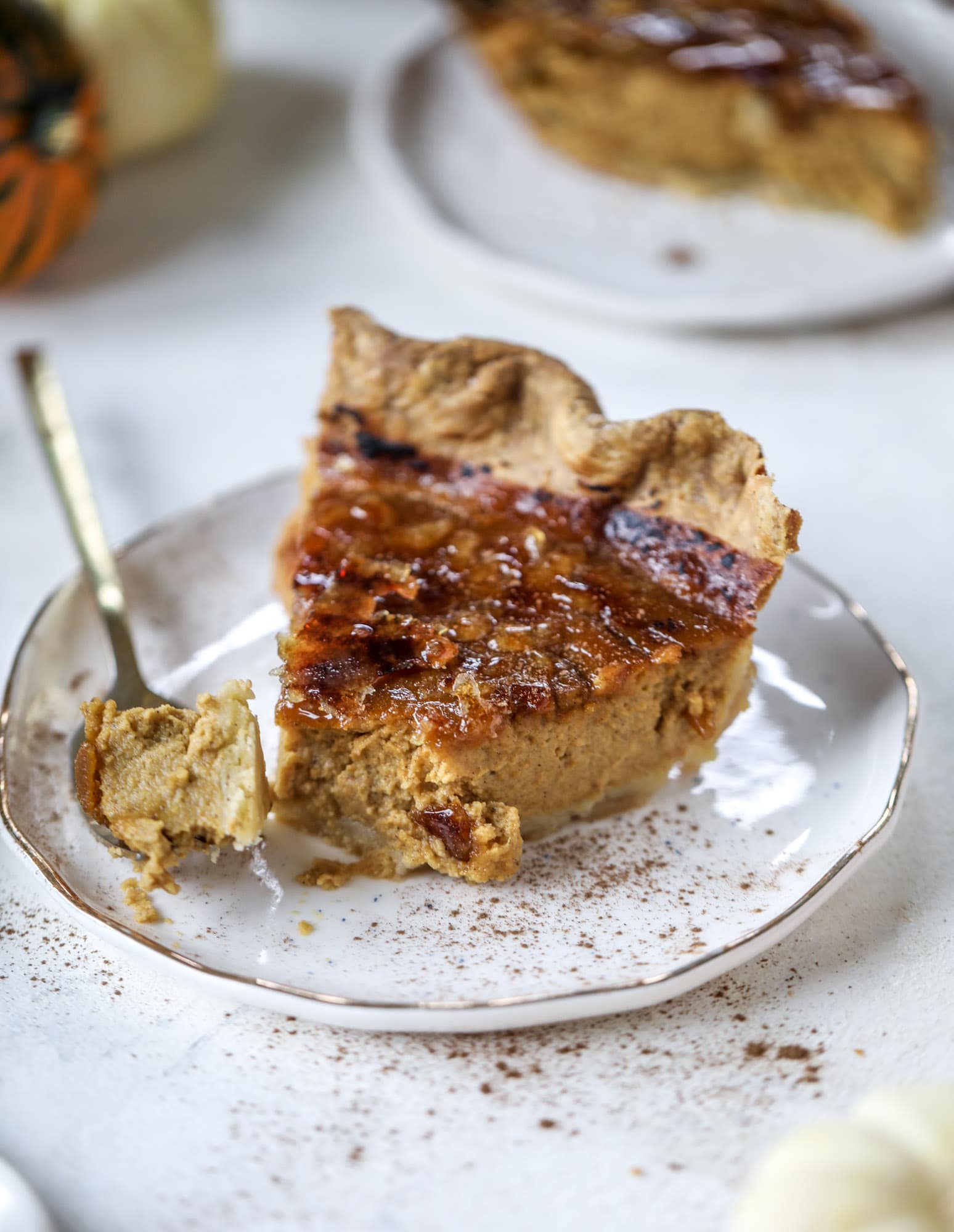 LOOK at that crystal sugar!