Three of my favorite things!

Apples, brussels and brown butter. Now this is a salad that I can get behind. I’ve made lots of brussels salads here before. Mostly because when I would find a vegetable that I actually liked, I would do everything to stretch it. Different salads and sides were a must!

So while I’ve made a shredded brussels salad, thai crunch brussels, a brussels panzanella and this winter crunch salad, along with my absolute favorite brussels caesar, I needed something else. I am a product of this generation so yes, I still needed another option.

No one wants to suffer from brussels sprouts boredom. This one is closest to my winter crunch salad, with a few exceptions. The winter crunch salad is definitely a full meal. At least for me. This salad here is meant to be a part of a meal. It’s slightly lighter without as much ooomph added in.

Except maybe it is super extra, because it’s covered in brown butter dressing? First, the brussels sprouts in this salad are RAW.

Eeeep! Remember the very first time I ate brussels sprouts and blogged about it? Who would have ever guessed that years (a decade?) later I would be eating them shaved raw in a salad by themselves.

Sure, the sweetness of the apple helps, but there’s not even bacon in this. Who am I and where did I go?!

But here’s the thing. Much like raw kale, once these shredded brussels are tossed with the dressing and kind of “marinate” for a few minutes, they soften, become less bitter and retain some crunch. Making them perfect for a salad.

Especially when a honeycrisp is involved. And cinnamon toasted walnuts. And shaved parm! This isn’t a super hearty salad – it obviously wouldn’t be enough for dinner if you’re very hungry. Eddie would take one look at this and laugh and be like “is this my starter?”

But! If you need a light lunch or dinner, this is it.

It’s also obviously a DELISH side dish to any fall meal.

Also, brown butter dressing, what?! Don’t freak out. It’s not as serious as hot bacon dressing, which to this day is still probably my mom’s favorite dressing.

Here, we have a bit of brown butter whisked with garlic, vinegar and dijon. It’s drinkable.

Everything I want in a brussels dish right here. Crunch crunch crunch. 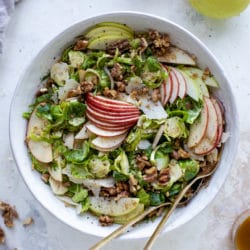 Feeling all the veggies.