Forgive me for serving you lentil bolognese in spring! 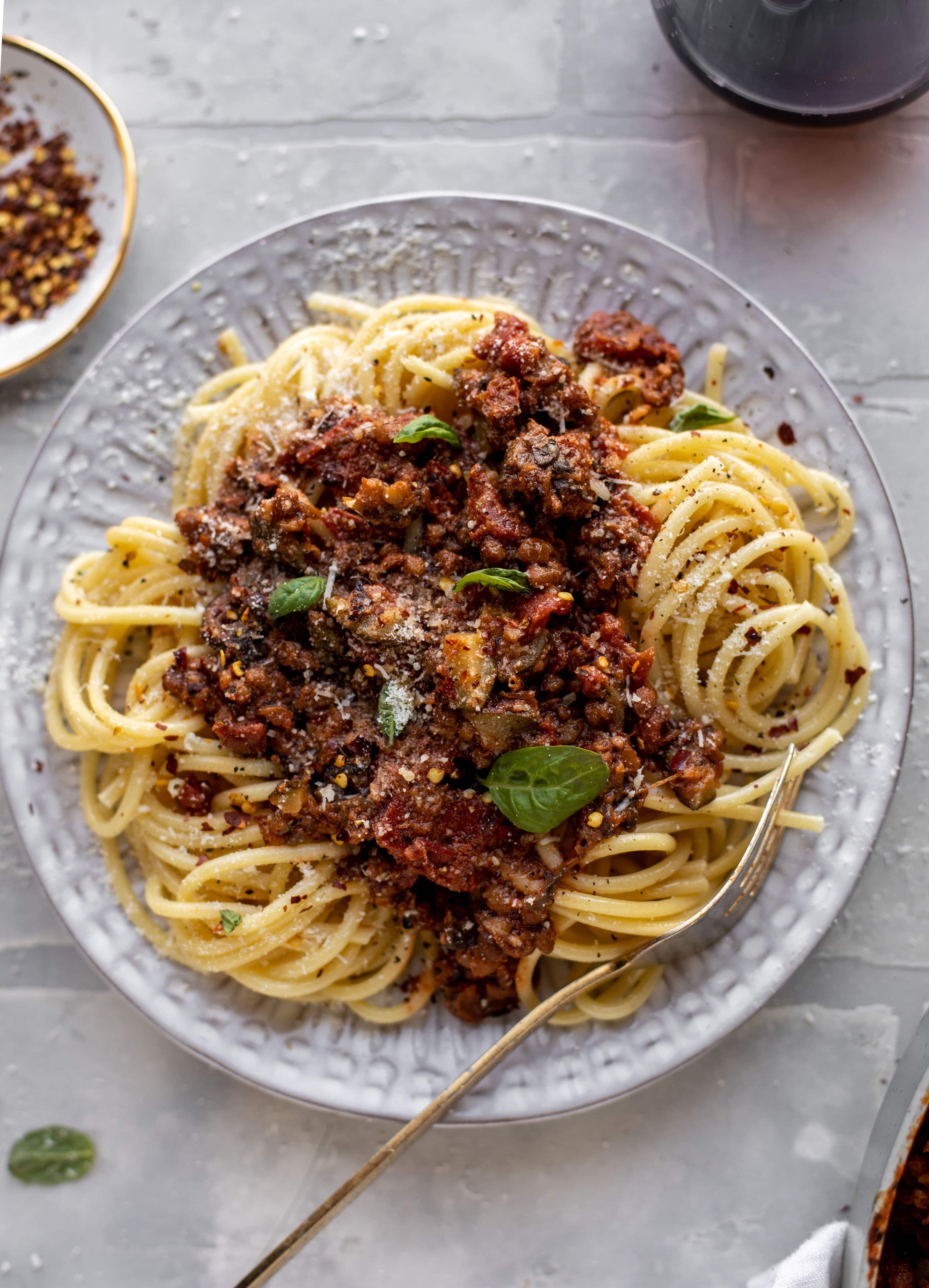 I promise it will be worth it. 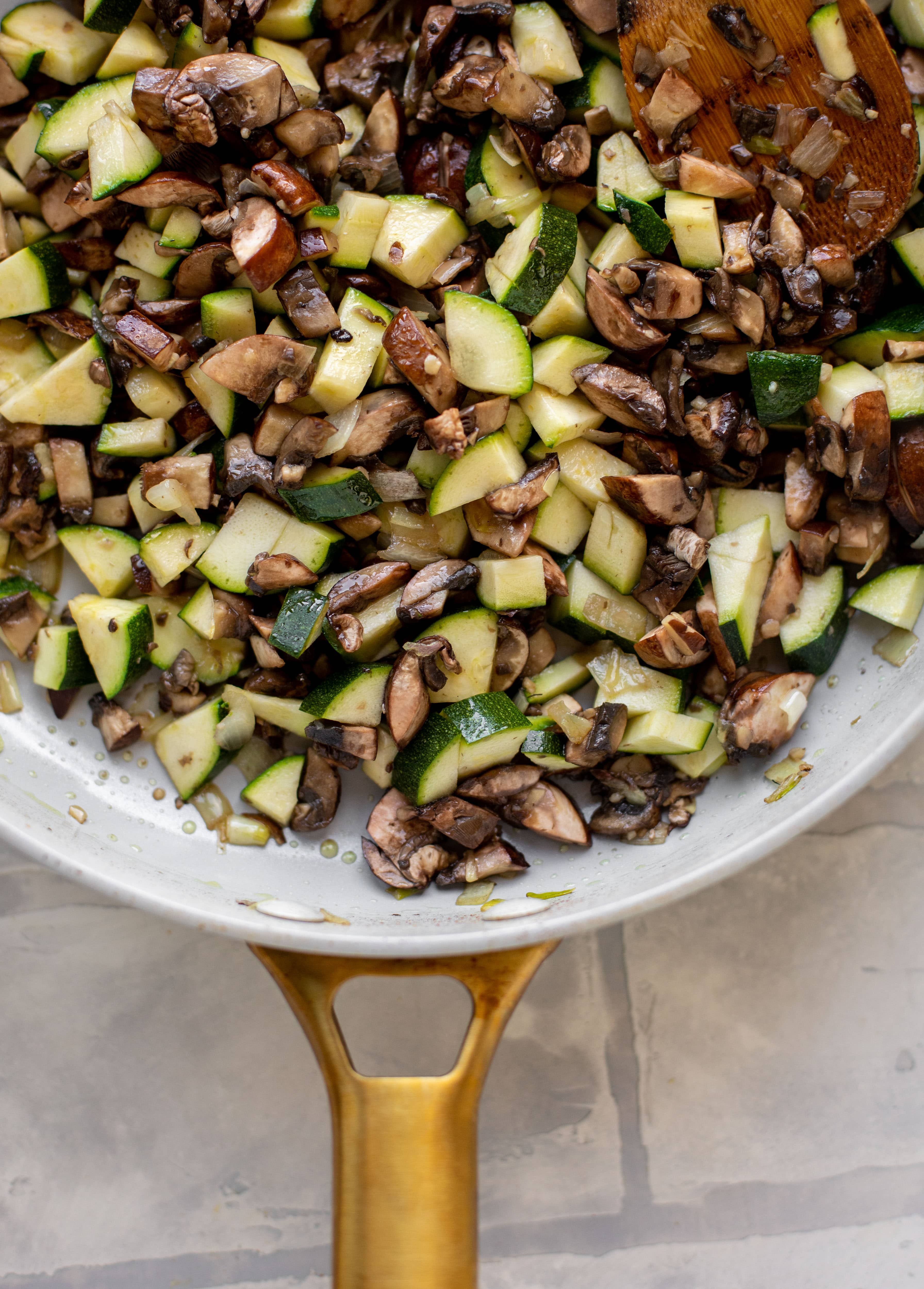 It is the weirdest thing ever to me that I’m sharing a lentil bolognese recipe with you in May. To me, this is a serious fall or winter meal. And I am such a seasonal cook and eater and by now, I’d be really starting to bring out all the early summer recipes.

And while this isn’t a recipe I’d make weekly in the warmer months, it is still a fantastic recipe that can be made year round! I figured that while we’re still quarantining at home and now with a possible meat shortage looming, there could not be a better time to share this recipe. Plus, it’s an ideal pantry meal. If you’re familiar with our favorite bolognese recipe from The Pretty Dish, this is a version of that. But an all veggie version! YES. No meat whatsoever.

My original version already has mushrooms in it, which is one of the reasons I think we all love it so much – it is so hearty! I added some more veggies here and removed the meat and it is just as good. Maybe better?! It’s not a simple recipe. In fact, it’s not really simplified whatsoever! But it’s not difficult either and it doesn’t take a super long time.

I would give yourself around an hour to make this and frankly gets better as it sits. Most of it is hands off time while you wait for it to simmer and all those flavors to develop.

Like a traditional bolognese, it’s hearty and rich and wonderful. It’s still made with red wine (of course!) and even a splash of cream. The filling would totally work in lasagna too. Okay, so it’s absolutely to die for.

It’s fabulous over pasta of course, really good over zucchini noodles and surprising good over (regular or cauliflower) rice.

I find it to be a very versatile dish! And it’s easily one of the most made recipes in my kitchen. If not theeee most made. 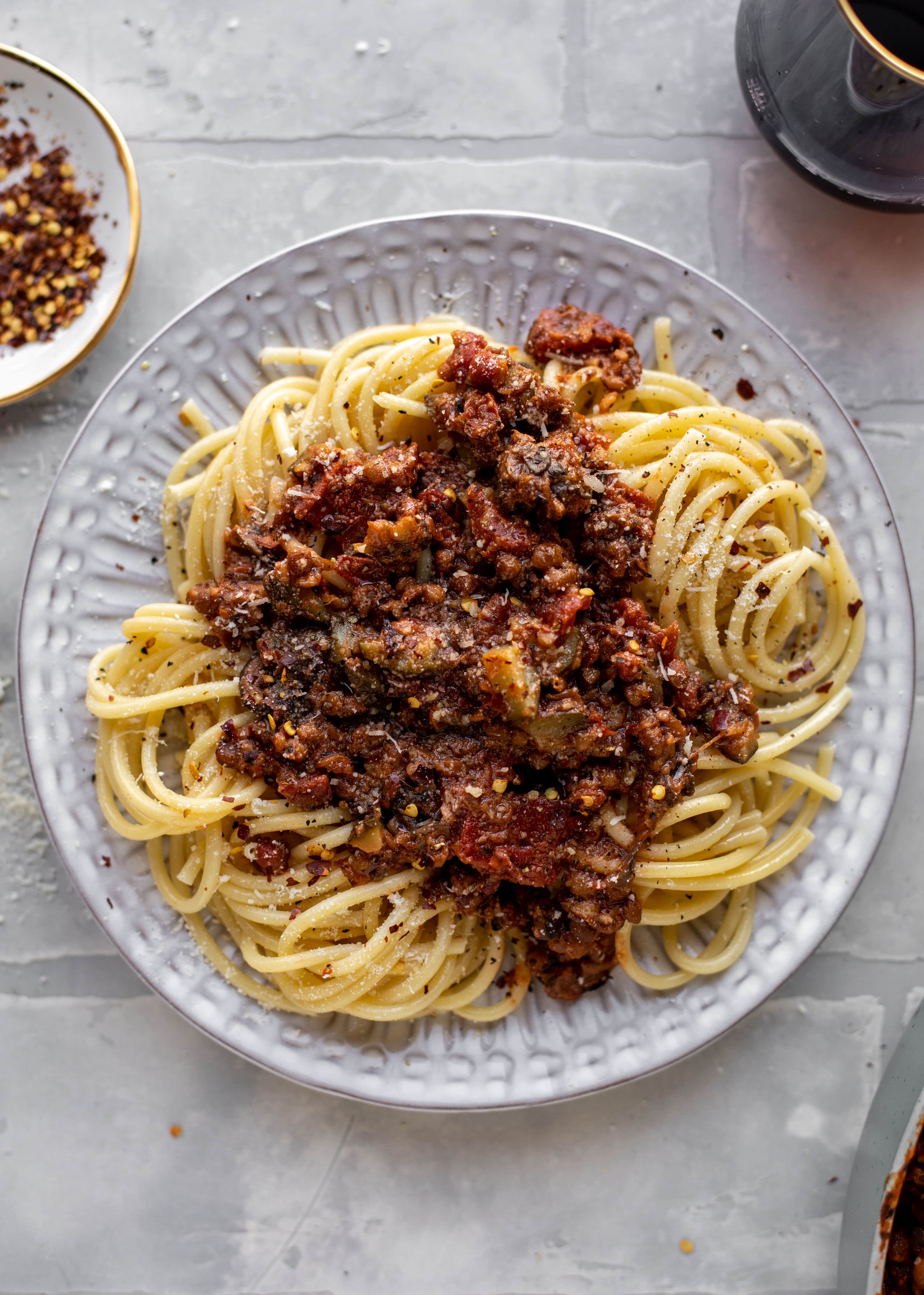 Now, I must tell you the best part of this recipe.

If you’ve been lurking around this blog for the last decade plus, you know that Eddie is a major carnivore. He likes/enjoys/wants meat at every single meal. If there isn’t meat, he hopes there are eggs. A true meat and potatoes guy.

And on top of that… you probably also know that I like to trick him into eating things that he thinks he doesn’t like. Not in a MEAN way, of course, but this is well documented here on the blog. Like how he swore he didn’t like ricotta but now some of his favorite dishes use ricotta. That sort of thing. 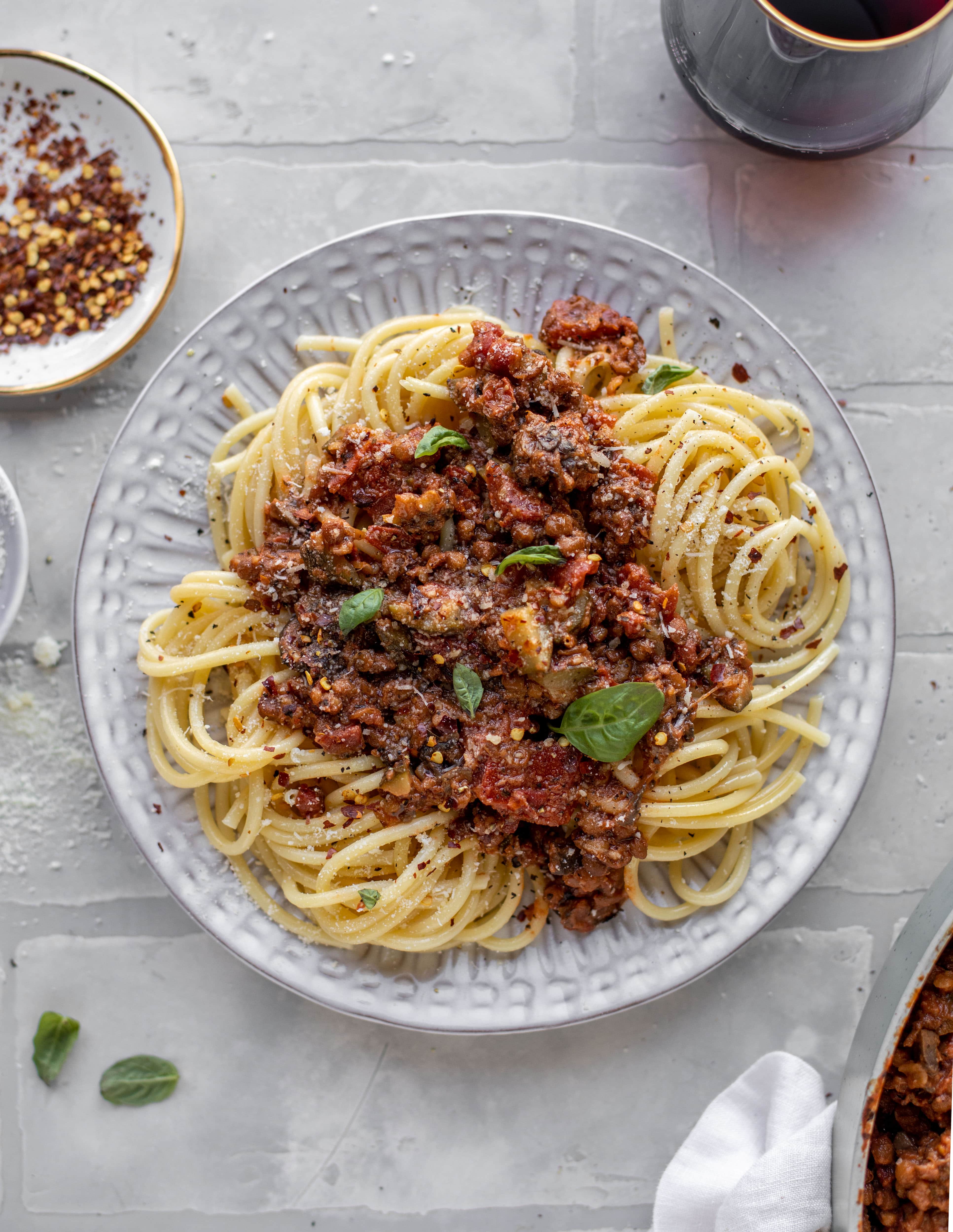 All rambles aside, I made this one day for dinner, testing it out. I tossed the pasta noodles right into the sauce. And I covered it and let it simmer for a little until Eddie got home. I wondered if he would be able to tell that it was a meatless meal. Then I started putting the kids to bed and totally forgot about it.

By the time I remembered, I had watched him eat two plates. It wasn’t until an hour later when I told him. He.was.stunned. First, I think he thought that I fed him something weird. Then, his mind was blown that it was actually meatless.

I am here to tell you that it is nearly impossible to tell that this is a meatless bolognese. If he didn’t know? Wow. I don’t know who will!

There is so much texture. So much flavor! 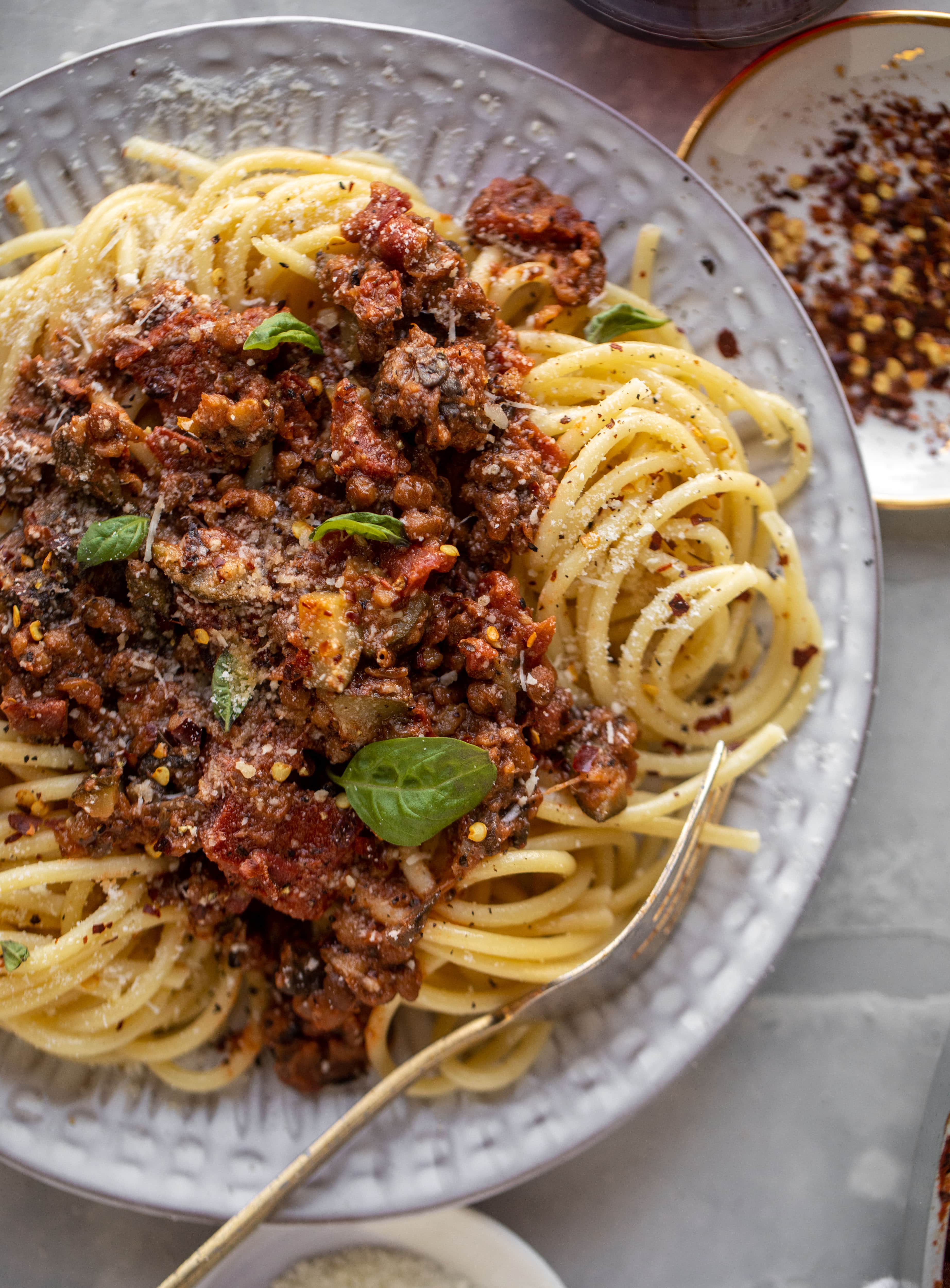 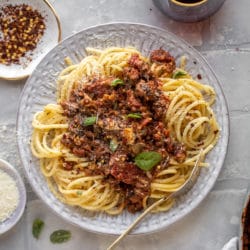 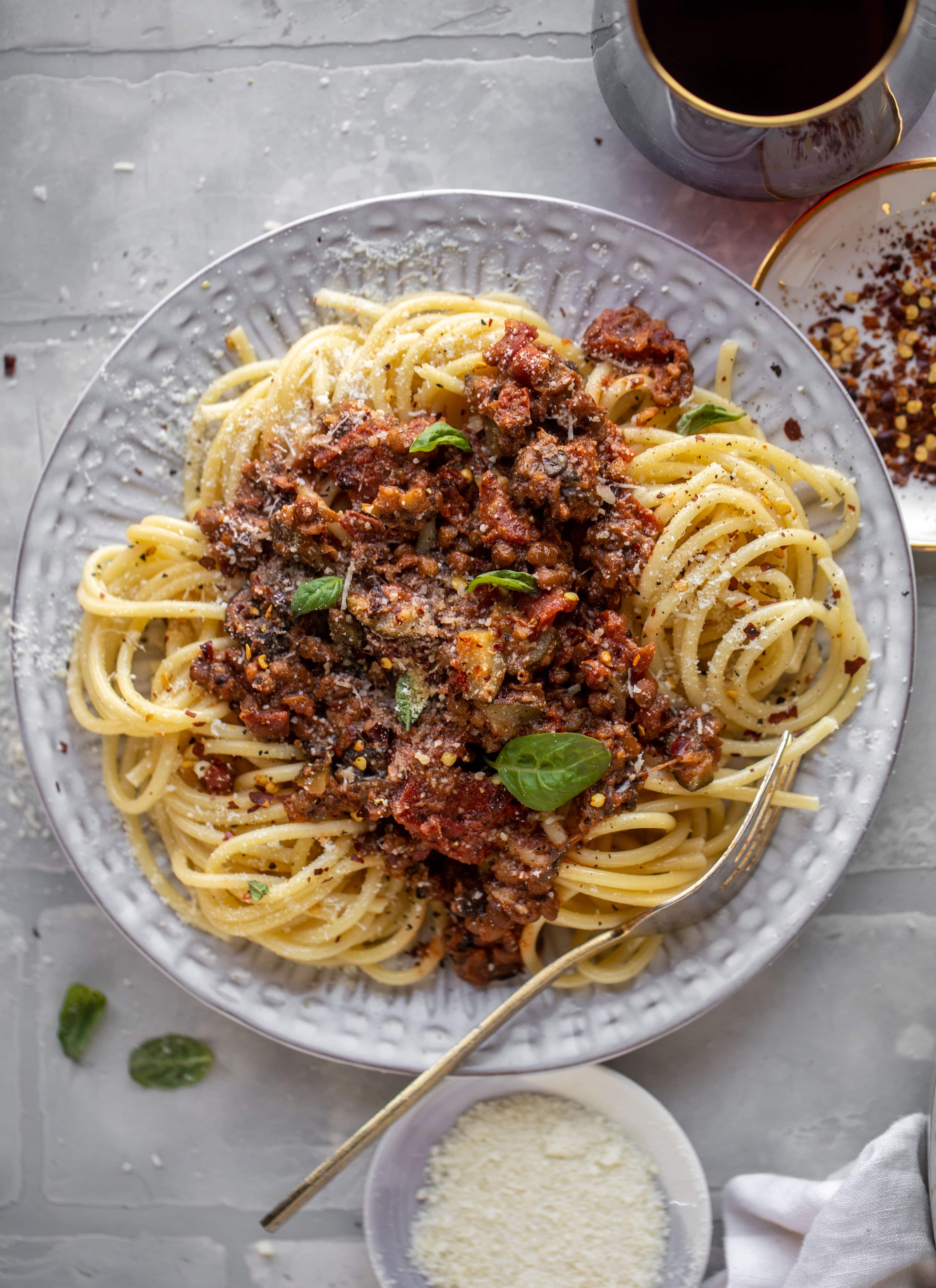 This is the epitome of comfort food.