Salmon chowder is loaded with carrots and onions, tender baby potatoes, fresh herbs and corn. Finished with dill dumplings dropped into the soup and cooked until fluffy. Major comfort food!

I’ve fallen in love with a new soup! 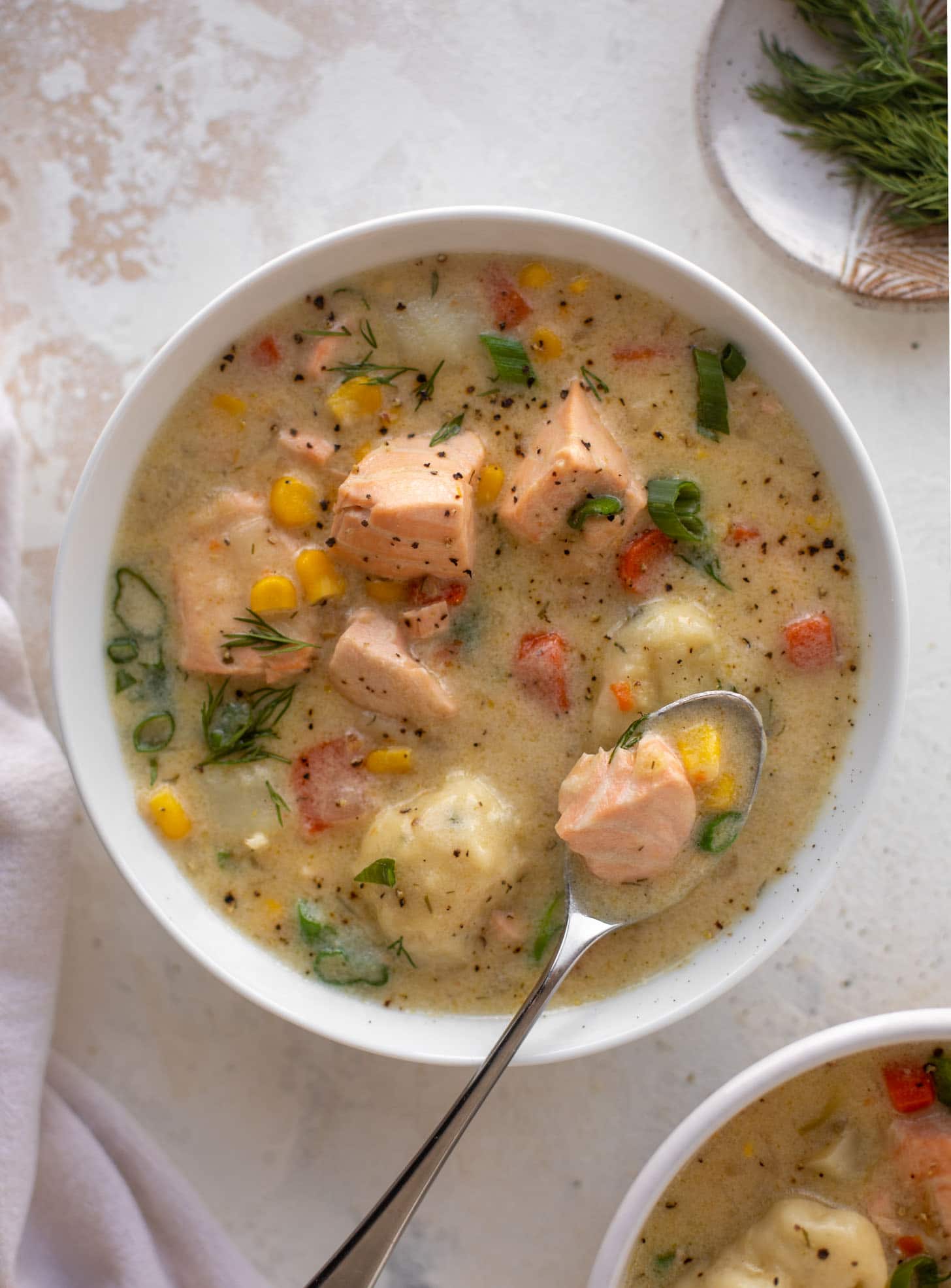 This soup is PERFECT for our chillier days right now but also can carry you through the warmer season.

Flaky and buttery salmon in a silky smooth chowder with carrots and potatoes and corn, studded by baby dill dumplings. We have the ultimate bowl of seafood chowder! 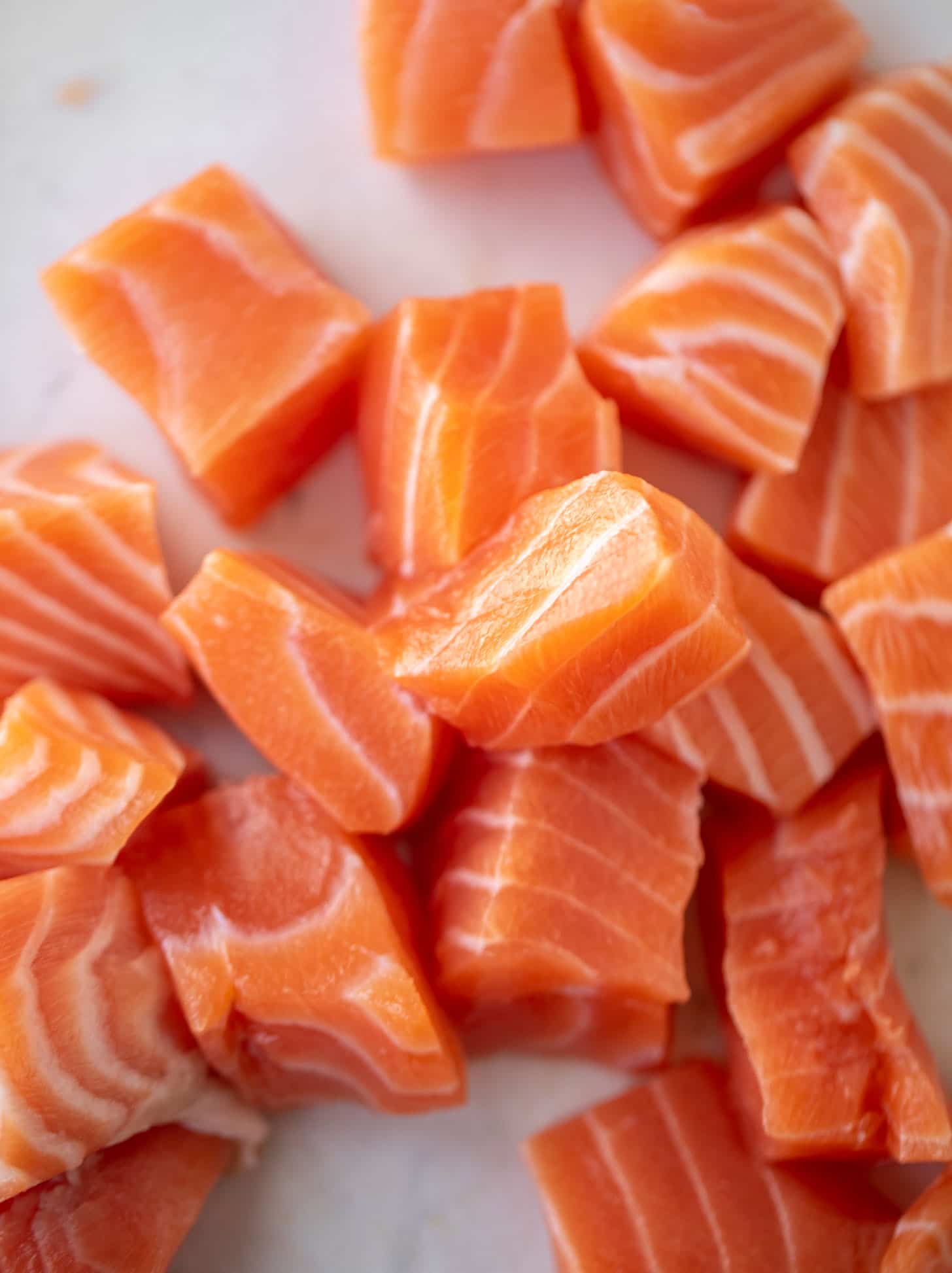 I love this chowder so much. It’s cozy and comforting but gives off a spring vibe at the same time.

Seafood in soup is tricky for me. I love chowders and bisques. And I love salmon. But I’ve been hesitant to combine the two for such a long time.

I have NO idea why I waited. If you’re a salmon fan, you will love this. The salmon is so tender and flaky. I love the large salmon chunks and it makes for such a hearty bowl! 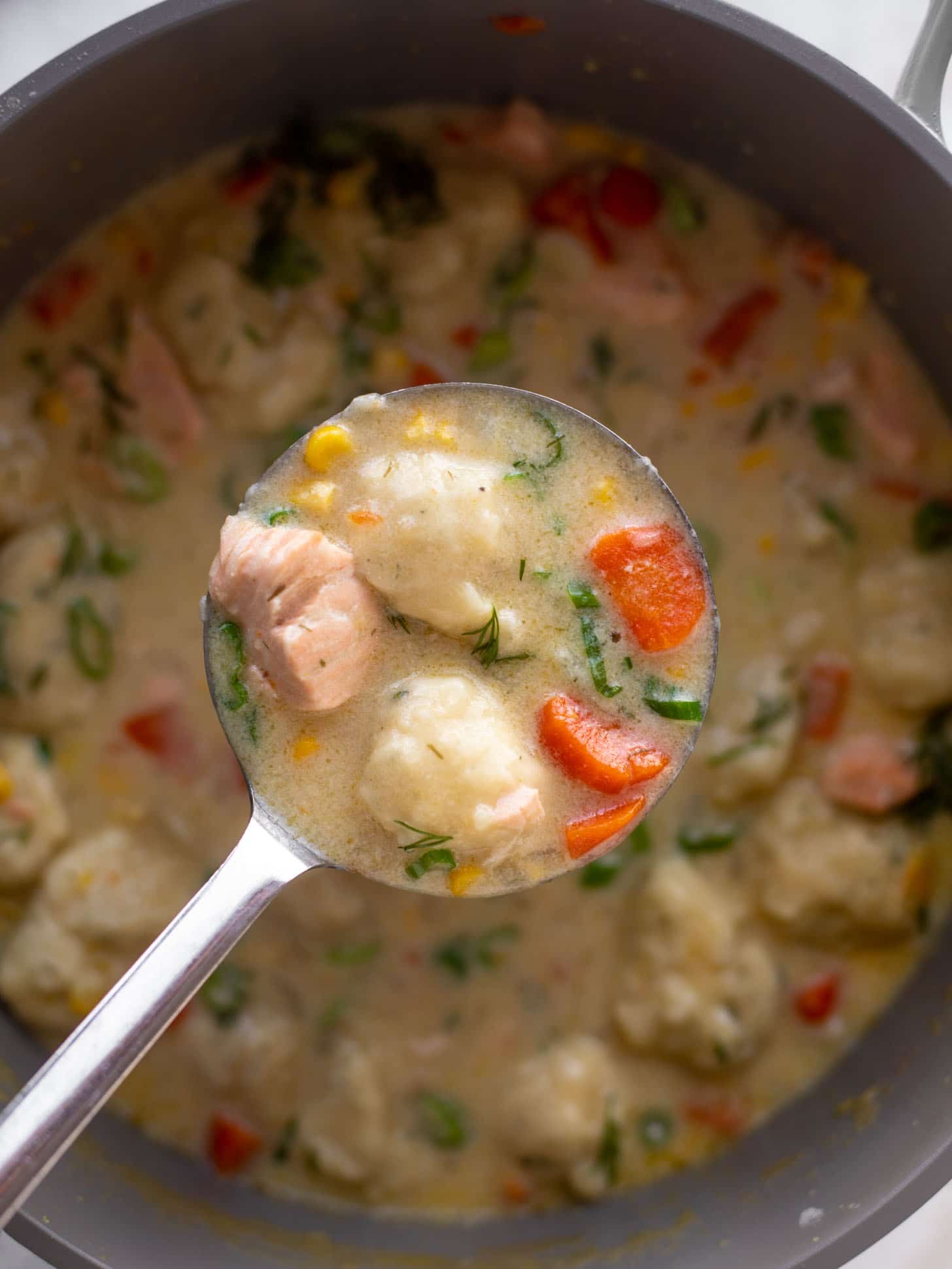 This pot starts out like many others – with some garlic, onions and carrots. Even though we’re making a seafood dish, I like to use a chicken stock here instead of a seafood stock. I find that using the chicken stock keeps it mild enough and allows the salmon to really shine.

I like to use baby yukon gold potatoes and a touch of cream. 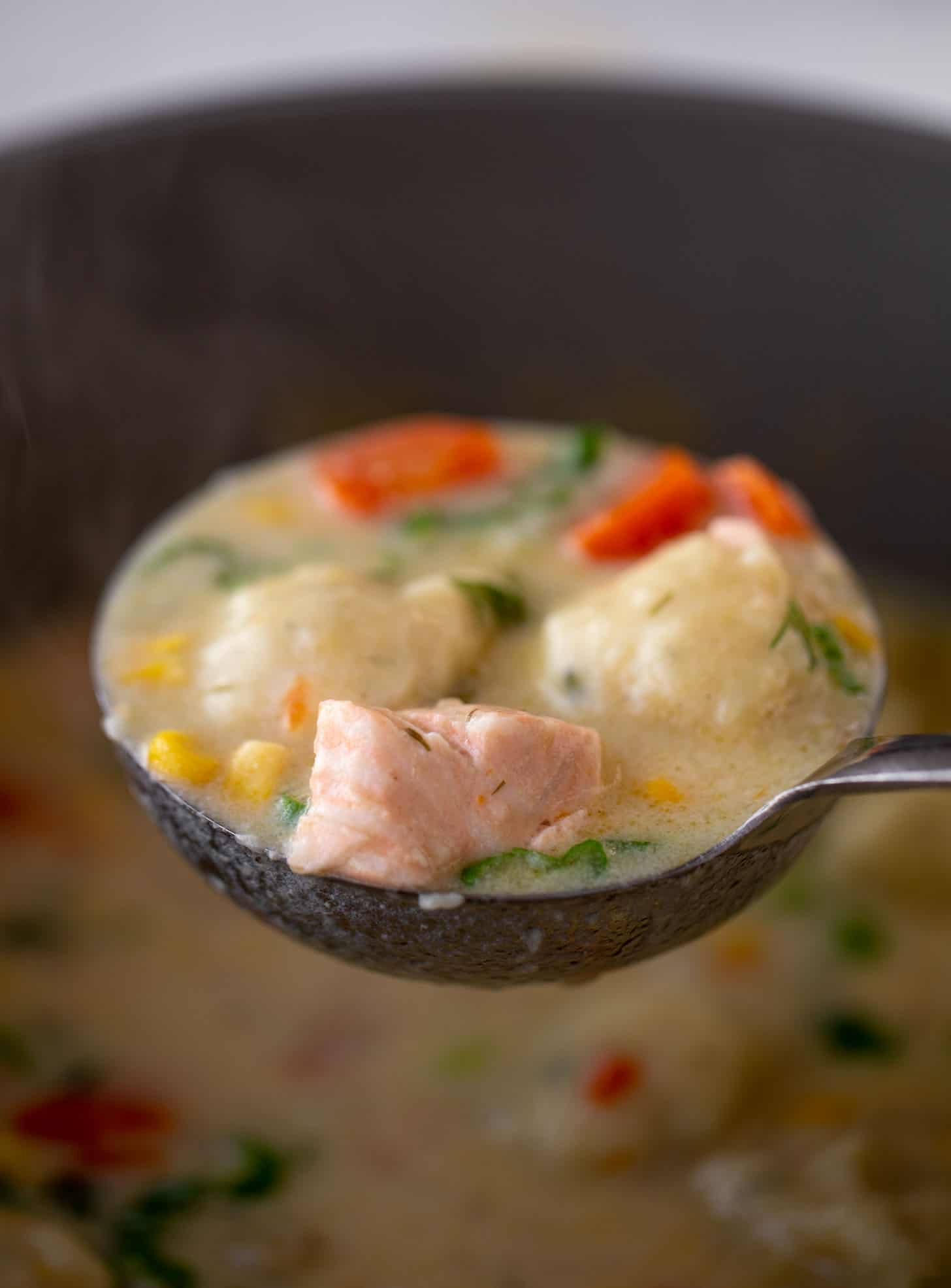 But my favorite part of the soup is… the DUMPLINGS!

Dill dumplings, to be exact. If we’re being picky, you could switch up the herbs and use whatever you love the most. Chives, rosemary, etc.

The dumplings? Well, they may be optional for you. I just LOVE a dumpling in soup so much.

I also prefer these dumplings to be on the smaller side. And I like dumplings that are roughly the size of the salmon chunks, maybe just a tad bigger. I was very torn between adding dumplings for comfort and keeping the soup on the lighter side for a quick meal. But they really make it a show stopper! 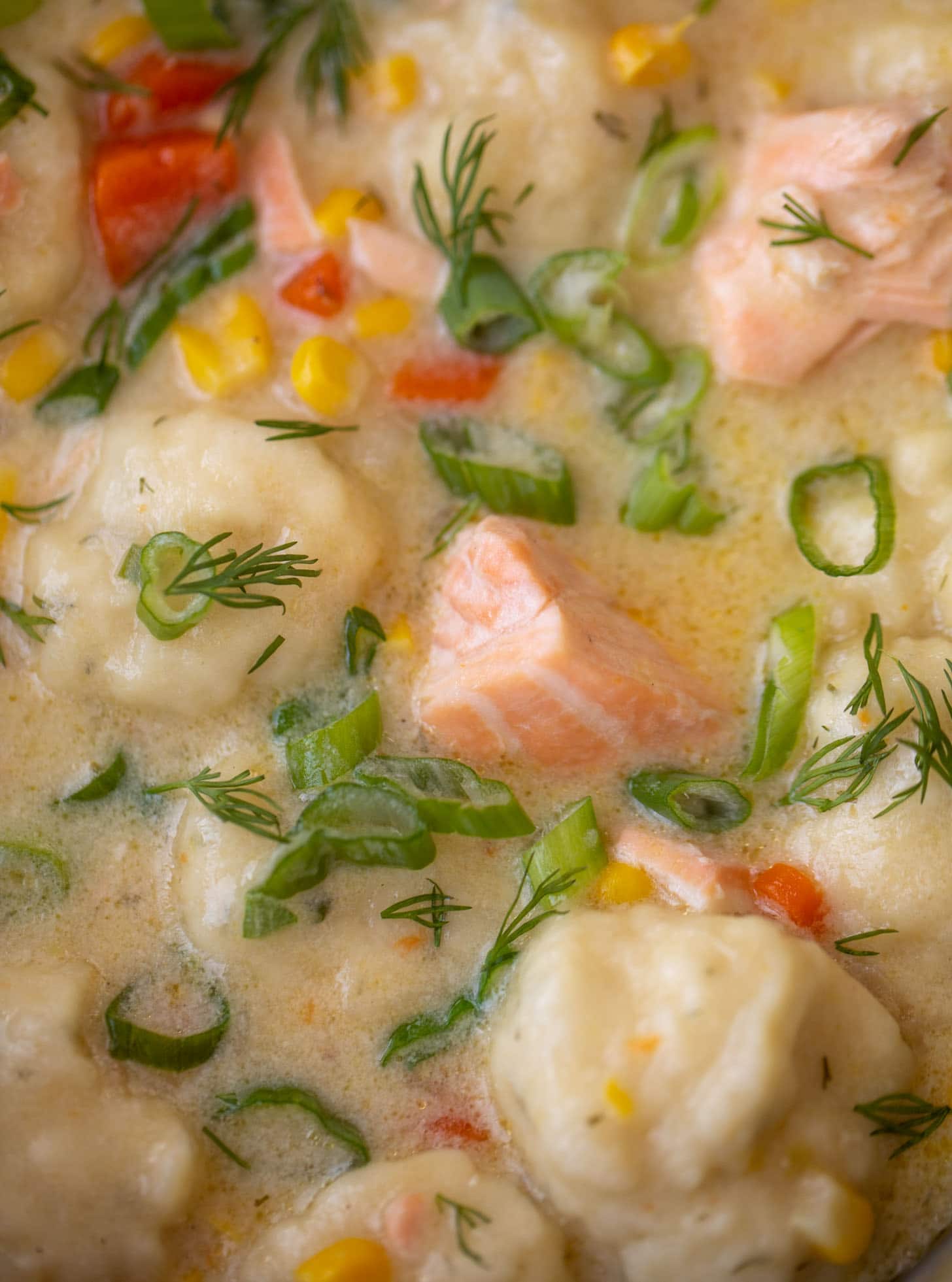 The dumplings take the soup to another level when it comes to comfort food. This is so incredibly hearty and soul-warming. I love how the salmon keeps it light, but it’s still very satisfying. The dumplings add in everything you want on a cold winter day.

Now if it’s a summer day? I may skip the dumplings. Just depends. The dumplings also add about 15 minutes to the time spent making the dish. If you’re in the mood, I say go for it. This is so wonderful and filling and the perfect bowl to enjoy! 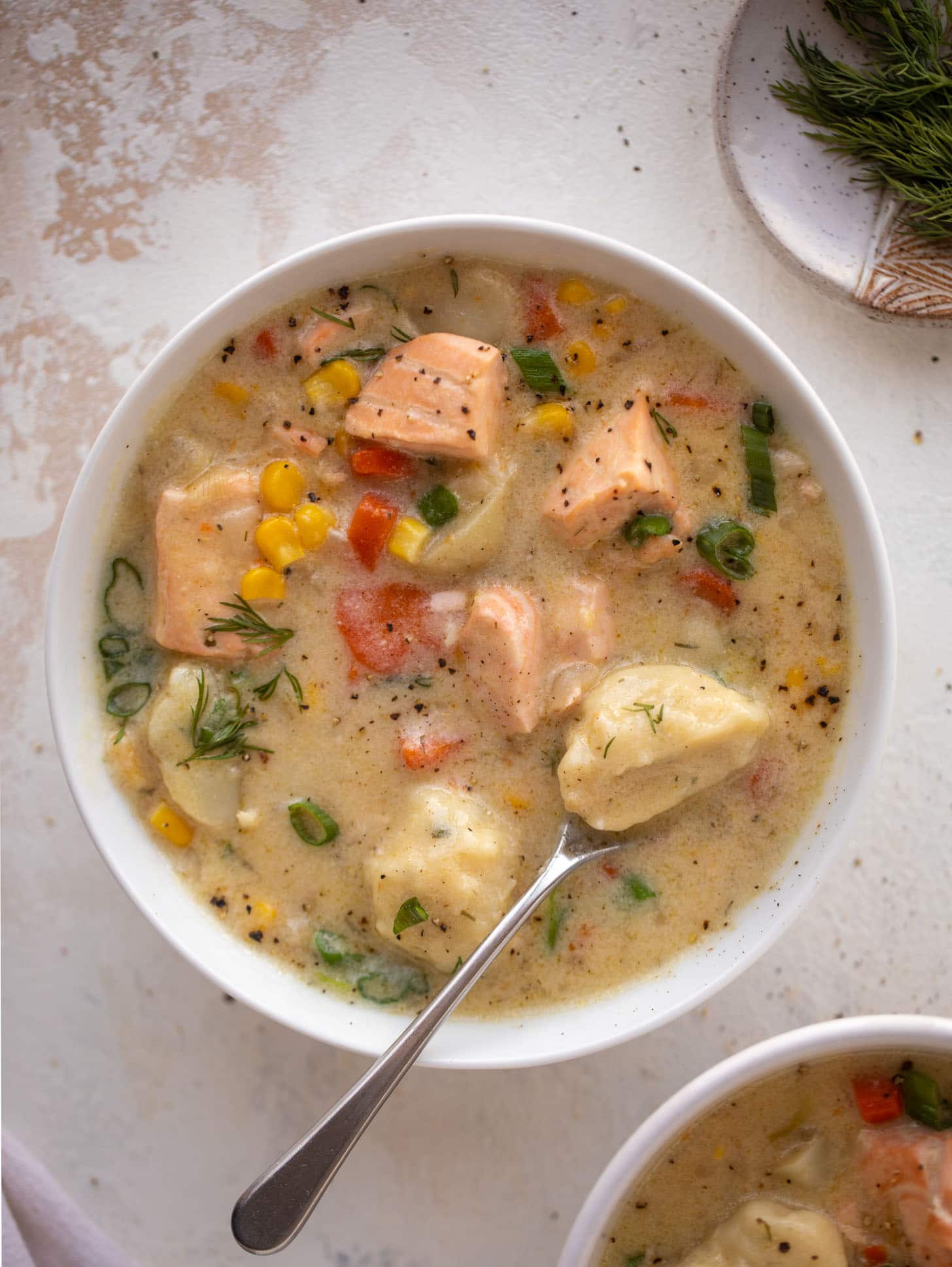 Major hug in a bowl.