We love these honey chipotle shrimp tacos! Tender, juicy shrimp is cooked in a honey chipotle mixture until sticky and delicious. Served on soft flour tortillas and topped with crumbled cotija cheese and crunchy lime slaw, these are a huge hit every time!

These sticky shrimp tacos are a serious new favorite over here. 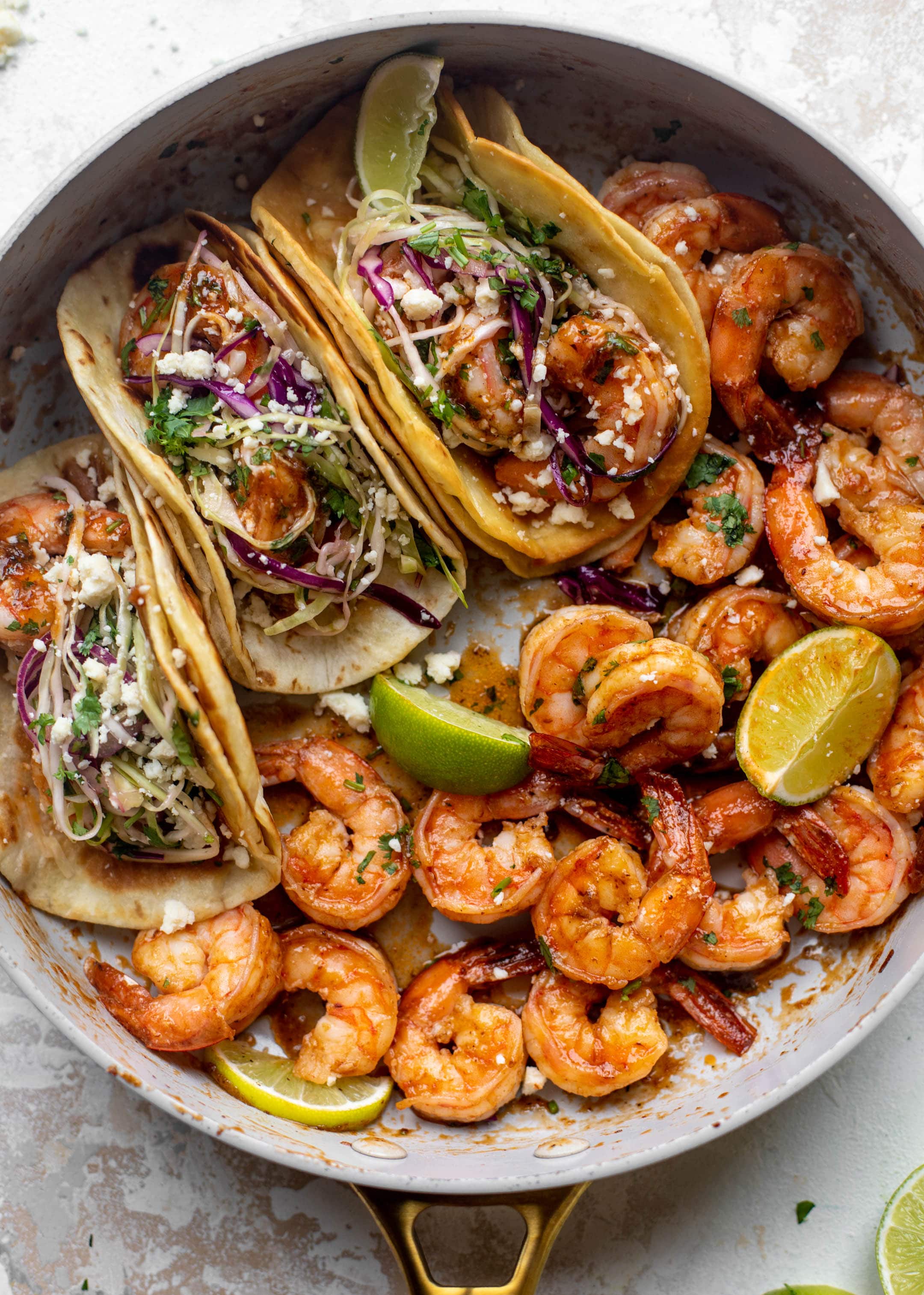 Tender, juicy shrimp in a sticky honey chipotle sauce are served in crispy flour tortillas with crumbly cotija cheese and the crunchiest lime slaw. The texture! The crunch! And the flavor is just unreal.

This is my kind of taco. I’m always on the search for new taco recipes. These days, my kids are obsessed with my baked turkey tacos, and while I love them too, I want them to have some taco variety in their life!

I’ve talked about it before but we had taco night every week in our house growing up – the classic ground beef tacos made with that old el paso taco seasoning. Sometimes we did hard shells, other times we did soft flour tortillas or even nachos. There were always bowls of chopped tomatoes, lettuce and shredded cheddar as well as copious amounts of sour cream.

The filling was always the same though: that classic 90s seasoned ground beef taco mix. It was delicious, but week after week it got a bit old at times. That’s why I love doing different variations of tacos here at home… that way the kids are exposed to all sorts of flavors and textures. I will put nearly anything in a taco, of course. If we go out to a restaurant and get tacos, Max tends to order chicken and Emilia loves anything with carnitas or pulled pork. I love a good fish taco and even better – a perfect shrimp taco. Eddie LOVES a shrimp version – or anything seafood. They can be hard to find though, so we love making them at home. My lime sheet pan shrimp fajitas are one of the most-made recipes here on the blog. I took some inspiration from those and made a sticky honey chipotle shrimp in a skillet, then topped the taco with a super crunchy lime slaw. SO delicious.

I also did a quick pan-fry for my tortilla, because it doesn’t get much better than that. Added some crumbly cotija cheese for a creamy punch and These tacos are divine. They are also super easy. Are you ready for this? The shrimp only has two ingredients in the sauce: chipotles in adobo sauce and honey. That is it. Of course, add a sprinkle of salt and pepper, but the flavor is all there. Sticky, sweet, a touch of heat and they’re done. (P.S. if you’re making this for kids and want to avoid super spicy, leave the actual chipotles out and just do the adobo sauce!)

The key is only cooking the shrimp for 30 seconds to 1 minute or so. Of course, this depends on the size of your shrimp, but the quickest way to make shrimp tough is by overcooking. So I say undercook them in the pan just a bit, and then add the sauce and let them simmer away to finish cooking. The sauce gets so sticky and wonderful – it’s hard not to eat the shrimp right from the skillet. Also super easy: the slaw! I need to share a recipe post soon with our favorite slaw recipe. It comes from Lacy and it’s the slaw we make for just about anything: tacos, sandwiches, a salad base – all the things. It’s very neutral but flavorful at the same time and can work with many dishes.

I find it to work exceptionally well with all meats and seafood too. 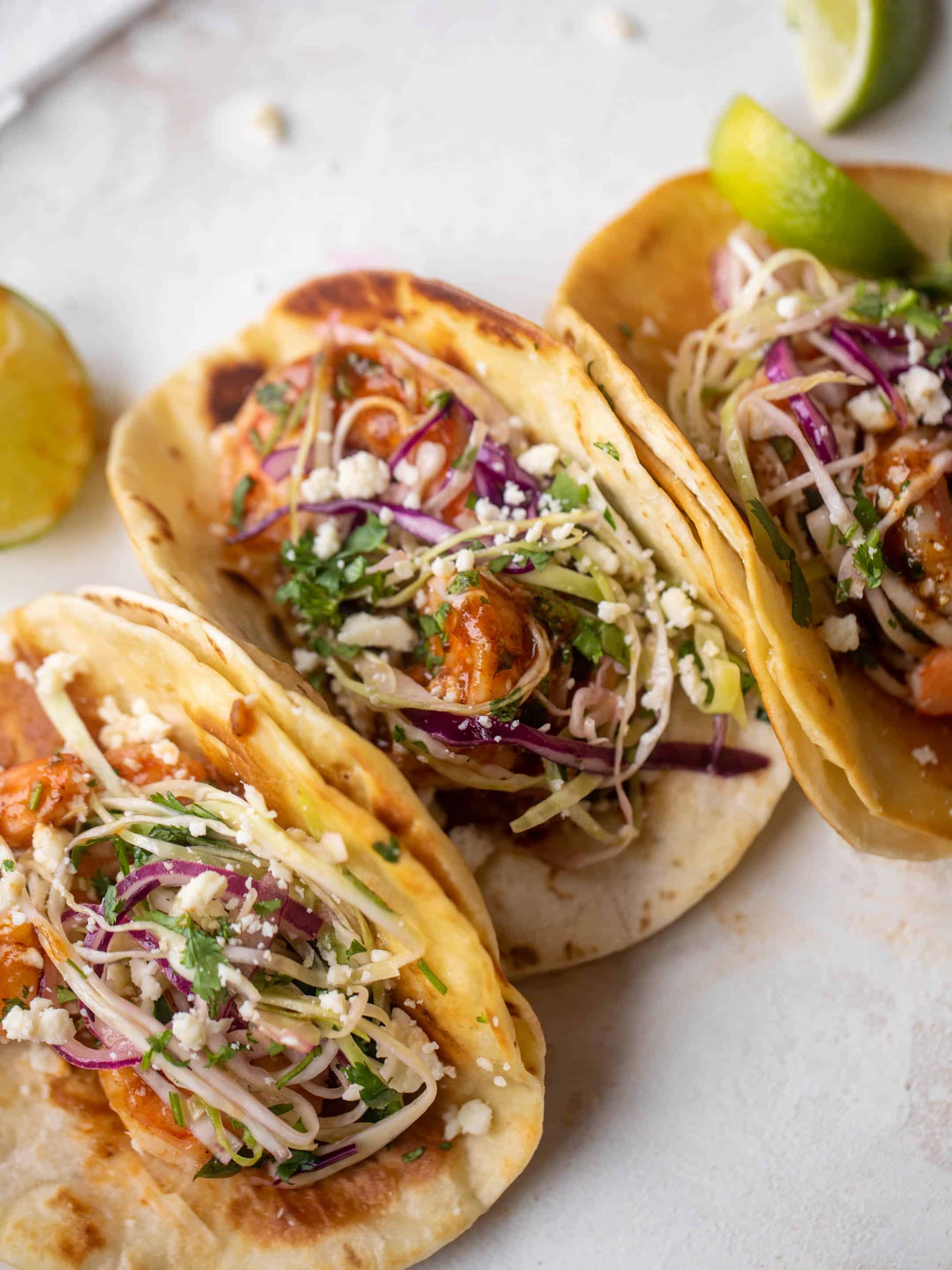 Really can’t even express how delicious these are! Get them on the menu ASAP. 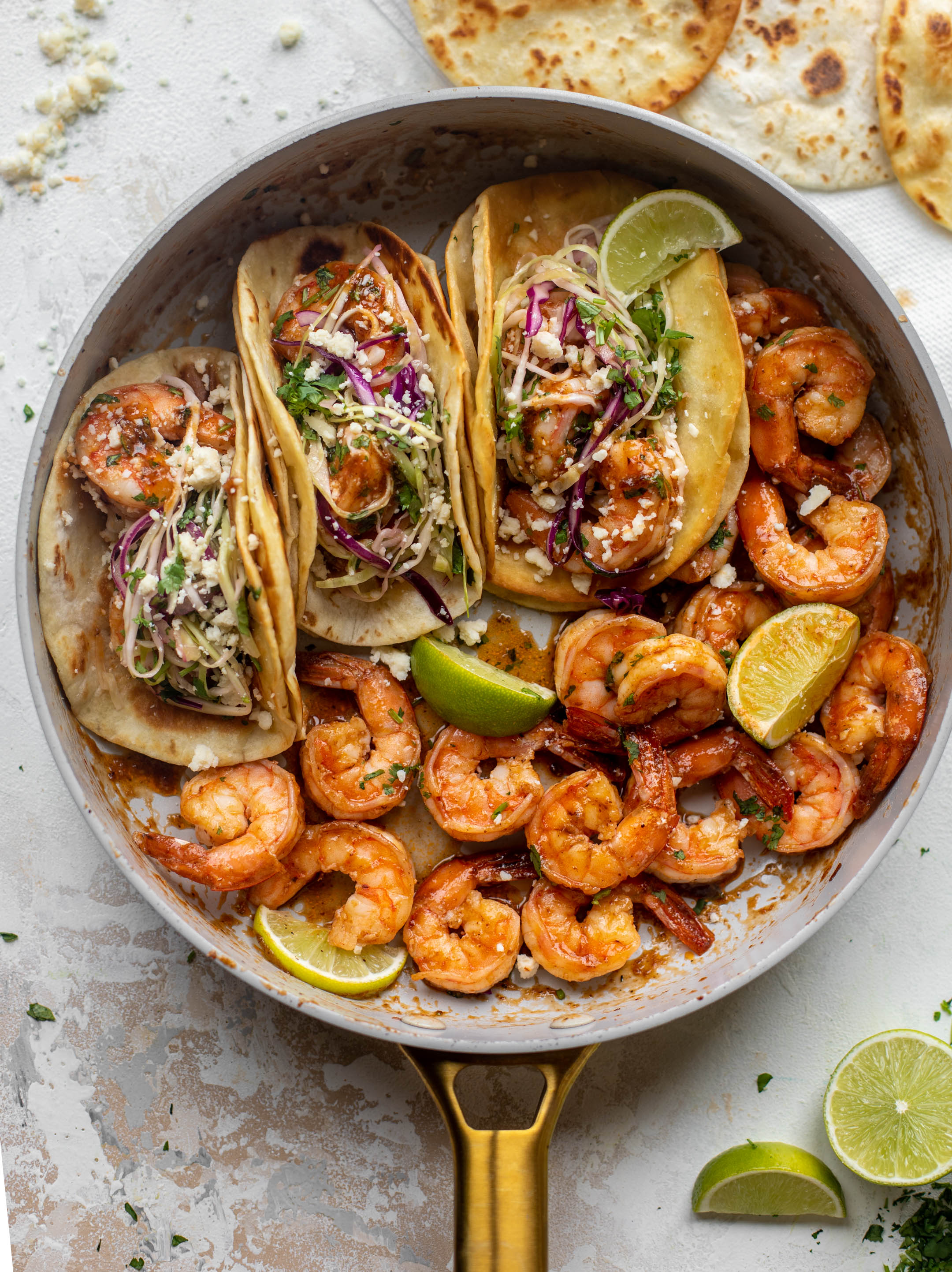 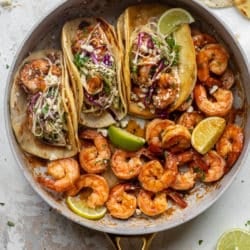