Do you love stuffing as much as I do?

I usually only eat it during the holidays. Maybe that is why I love it so much?

I’m not going to lie. I love the artery-clogging, buttery stuffing that my mom serves on Thanksgiving. I have never had stuffing from a box.

Scratch that. I think before we were married my husband deviated from his usual plain-whole-wheat-noodles-and-egg-whites-only dinner, to makes some chicken and stuffing. Probably because one of his buddies suggested it, not me.

And yes, for years, he ate only whole wheat noodles and egg whites, mixed together, for dinner. Thank goodness I came along.

(Sometimes he still smells like he eats egg whites for dinner. Did I just say that in public?

I also love whole wheat, multi-grain Tuscany bread. And if you’ve been reading, you know that bread is not something I love. This bread must be good.

I chopped up a few slices of the whole-grain bread. 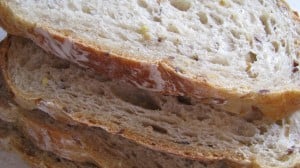 And seasoned it with rosemary, thyme, and parsley, and added a sprinkling of olive oil. I toasted it in the oven, because who doesn’t love the crispy, crunchy bites of stuffing?

I chopped some celery, onion, and apple. Yes, this celery has bread crumbs all over it. I can be a mess sometimes. I spinkled some nutmeg on the chopped veggies and fruit. Because I wanted to.

And sauteed them in some olive oil for about 10 minutes. Once the veggies were soft – yet still a bit crisp – and the bread was toasty, I combined them in a small baking dish. I say small dish, because we all know if I made it in a large dish, I’d eat it all.

I have enough buttons to sew back on my pants this week, so I went with the small dish.

I added some chicken stock, but you could also add veggie stock. Into the oven it went, and while I waited patiently, I dug into this like I had never seen food before.

When the stuffing came out, it was perfect. Some parts were crunchy, others were soft. They celery and apple had a nice crisp flavor, but it still tasted ‘warm.’ Perfect with mashed potatoes!

Cut bread into chunks – whatever size you desire. Lay on a baking sheet on toss with rosemary, thyme, and parsley, and 1 tablespoon olive oil. Toast for about 10-15 minutes, un just until golden brown.

While the bread is toasting, sprinkle nutmeg, and a bit of salt and pepper on chopped celery, onion, and apple. Add one tablespoon of olive oil to a pan on medium heat. Once hot, add apple and veggies to pan. Saute, stirring occasionally, for about 5-10 minutes.

Combine bread and celery mixture in a small baking dish. Add chicken stock, tossing a few times to coat. Bread should be moist, but not soggy. Have you checked out my FIT BITES page yet? It is more of my daily life. Without the butter.

« Previous PostHIIT, Bootcamp, and My Staple Circuit Workout.
Next Post » It’s Beginning To Look a Lot Like Christmas.