How To Make Croissants. [and lose your mind while doing it]

Please say yes, because you will be rewarded with this. 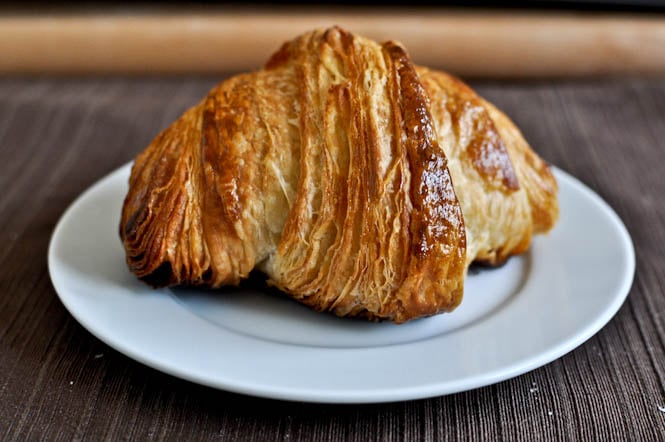 This was a… project. To say the least.

I have been dying to try homemade croissants for ages, but after mention of them when I made almond joy scones, I could hardly wait.

I have a very nostalgic reason for loving croissants: since I was young, each summer my grandma would always pick up a croissant from the Bread Box Bakery in Boyne City. It was such a treat and we ate them plain – simple, delicious and buttery. No eggs, no jam, nothing to take away from their fabulous flavor. Croissants always make me think of her.

But I also have a superficial reason for loving croissants: It’s Complicated. I wish I could live inside that movie. I’m in love with Steve Martin, I want to own Meryl Streep’s bakery and Alec Baldwin has some super weird sex appeal that creeps me out and makes me crazy about him at the same time. It is not a stretch to say I’ve probably seen the movie 100 times. I’m easily entertained.

Too bad they don’t mention that it takes like 14 hours to really make croissants. I wish I was joking… but I’m not. I was able to narrow down the recipe I made to about 10 hours, but only because I’m wildly impatient and was sick of pacing back and forth in my kitchen all day. Not to mention… there was flour EVERYWHERE.

I’m not about to tell you “oh! croissants are SO easy! you can totally do it!” because seriously… they are not. However, I think it is similar to roasting a chicken – the first time sucks the life out of you but it gets easier and more enjoyable time after time after time. At least that’s what I’m hoping. Plus, the end result is totally worth it and you know I’m not just saying that. I have never had a croissant so fresh that I burnt my tongue on it… until now.

Oh… and I made four flavors of croissants: traditional, chocolate, cinnamon sugar and pumpkin spice. Hop on for the ride. Yes, I’m insane.

Easy enough… it all starts with some yeast and flour. I know you have all of the ingredients in your kitchen, which means you should probably start right now.

The dough feels a bit sticky after mixing at this point, but remove it from the bowl anyway and knead it with some flour. I love that feeling on my hands. Form the dough into a soft, little pillow-like lump and then wrap it in plastic wrap and let it chill in the fridge for about an hour. Start being impatient now. After the hour is up, you can start beating the crap out of this butter. I had no clue this was how croissants were made, and up until now was completely naive on why croissants are packed with calories. I thought, “umm… isn’t is just all flour and like, pastry stuff?”

All of this butter goes into the croissants. I.freaking.love.it. Don’t you even try to reduce the amount. I mean… these are CROISSANTS. Using a rolling pin and cold, but not hard-as-a-rock butter, you press it in between two sheets of plastic wrap (or towels – the recipe called for towels, but uh… mine weren’t clean) and mash it into a square. Then use a dirty tape measure from the garage to make sure it’s a rectangle. <– dirty tape measure optional. [P.S. for someone who loathes following a recipe, making these croissants and actually measuring them our to a T was a challenge… pretty sure I have multiple personalities considering I fought with myself about four different times.]

After rolling out the refrigerated dough, you place the butter slab in the middle, like the bottom right photo above. Then you fold it up like a letter. Top comes down, bottom comes up. This amused me. Mainly because I was starting to lose it and was only two hours in. Using a rolling pin and having the short end of the new dough rectangle face you, press down with the pin to help roll out the dough. You roll it out to a super skinny rectangle, fold it like a letter again, then stick it in the fridge. This is considered the first fold.

You have to do FOUR FOLDS. With 1-2 hours of refrigeration in between. Totally doable, but not when you want to do it all in natural daylight to photograph for your invisible internet friends. My recommendation would be to make the dough and do the four folds in the late afternoon/evening, refrigerate overnight then wake up and make the actual croissants.

You have to do this for someone realllllly important. Like yourself.

Sidebar: I should mention that I could totally be doing this wrong, and if you’re a pastry chef you most likely are cringing right now. But… it worked. This is what my dough looked like after four folds and refrigeration, right before I rolled it out for the last time. See all those little butter crumbles in the dough? Yeah. I’m pretty sure it’s not supposed to be like that at all. I was nervous and almost threw in the towel, but I had come so far. Moral of the story: if this happens to your dough, continue anyway.

I rolled the dough into a final skinny rectangle, then sliced triangles with a pizza cutter. Then it’s time to cut a little slit in the straight end, and roll that baby up. It reminded me of… an elephant. My rolling skills clearly are lacking.

After rolling, brush the croissants with a little beaten egg wash, and into the oven they go. Man… I was so nervous. I thought for sure they were not going to turn out.

Before we get to the finish line, here are the rest of the flavors. I almost cried when these were in my oven. They smelled so amazingly good. The minute they came out, I tore into one and was stunned by the layers and layers of flakes, as I was sure I had done something wrong in the process. Maybe these are a bit foolproof?

I could have cared less about plating. Who cares about flakey crumbs? Not I.

While photographing, I ended up eating another whole one + a few bites to taste test the others. Within minutes, I was feeling not so hot. I packed them up and drove them over to my mom, because she and my dad also love croissants. I knew this was a better choice than eating croissants for every meal the next four days.

But that didn’t work.

Because the day after, I drove over to their house solely to eat one.

Then the next day, I drove over again. I ate the last one since they plowed through them pretty quickly. The bane of my existence is stale pastries, but these were still pretty delicious on day 3. The trauma is wearing off, so hopefully it won’t take me 10 years to make another batch. 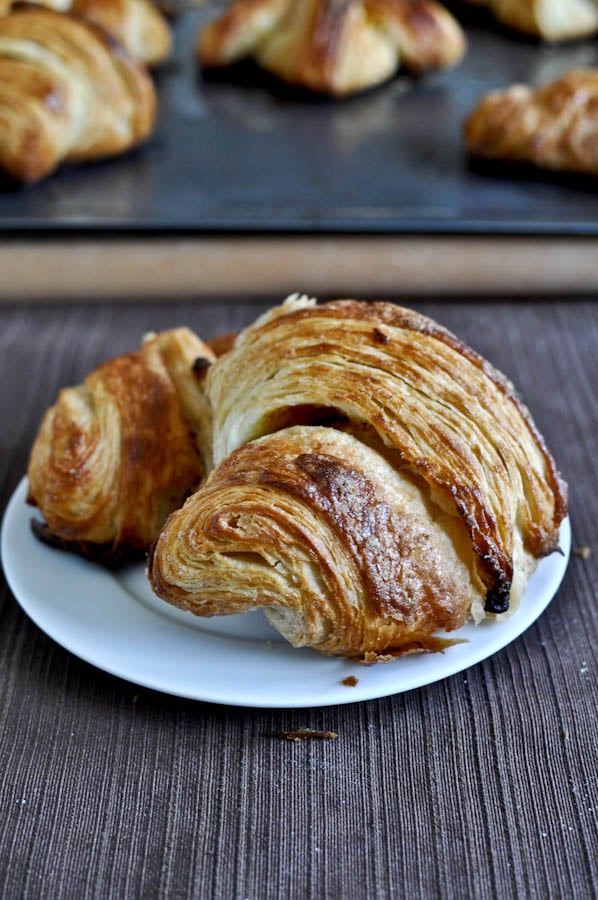 [dough from epicurious, method from cooks.com]

makes about 20-24 croissants, depending on triangle size

1. To make dough, combined milk, sugar and yeast in the bowl of a stand mixer attached with a dough hook, and let sit until foamy – about 5-10 minutes. If it doesn’t foam, start over. Once foamy, add 3 3/4 cups flour and the salt, and mix on low speed until dough comes together and is soft, about 7 minutes. Transfer dough to your workspace and knead by hand for a minute or 2, using more flour to make it silky and not sticky. Form dough into a 1 1/2 inch thick rectangle, wrap in plastic wrap and chill for one hour.

2. Once dough has chilled, set butter sticks next to each other with their sides touching. Pound it down with a rolling pin to soften it a bit, then set it between two towels or two sheets of plastic wrap. I found this to be the most challenging part. Using the rolling pin, continue to press down on it with the rolling pin and roll. I also used my hands to press it down and form it into 8 x 5 inch rectangle. Once done, wrap in plastic wrap and chill while rolling dough.

3. Remove dough from plastic wrap and sit on a lightly floured surface. Using your hands, stretch the dough (especially the corners) into the 16 x 10 inch rectangle. I was wary of this but it actually works pretty easily – just be sure to measure! Place dough with a short end near you. Set butter slab in the middle of the dough, then fold the ends up like a letter: top half down and bottom half up. Turn dough again so the short side is facing you, and use the rolling pin to press down equally on the dough to help flatten it. Roll dough into a 15 x 10 inch rectangle, rolling out to the ends but not actually over the ends. Again, fold the dough like a letter: top have down and bottom half up, and stretch so the corners are square. This should form a 10 x 5 inch rectangle (roughly). Wrap in plastic wrap and chill for one hour.

4. Repeat step 3 THREE more times, for a total of four folds, chilling the dough for one hour after each fold. After the fourth and final fold, wrap dough tightly with plastic wrap and chill for 8-12 hours, no longer. I chilled mine for 6 and it was fine.

5. Preheat oven to 450 degrees. When dough is ready, roll out to a very long and skinny rectangle, about 20 x 32. (If your counter is small, you can break the dough in half and do this in 2 sections). Using a pizza slicer (or sharp knife) cut the dough into triangles. Cut a small vertical slit right into the middle of the straight end, and using both hands, roll croissant up pushing the sides out to either side. Place on a baking sheet about 2-3 inches apart, cover with a towel and set in a warm place to rice for 1-2 hours. I did not see a great change, but they rose a bit. Brush with beaten egg then, bake for 12-14 minutes, or until golden brown. Let cool before removing from baking sheet.

For chocolate croissants: in step 5, place a 1/2 – 1 ounce of chocolate in the middle of the dough before rolling up.

For pumpkin spice croissants: in step 5, drop 1-2 teaspoons of pumpkin spice cream into the middle of the dough before rolling. For cream, combine 1 part cream cheese with 1/2 part pureed pumpkin, 1/2 part sugar, and a heavy sprinkle of pumpkin pie spice. Either layer each fold or roll each triangle through a pumpkin spice sugar mixture (2 parts sugar to 1 part pumpkin pie spice), then brush with beaten egg and coat with pumpkin spice sugar. Be sure to use a non-stick baking sheet, as sugar will caramelize a bit and croissants may stick. Make sure they cool completely before trying to remove.

[Note: these additional flavors can definitely be decorated in cuter ways, I was just totally done at this point. ] Whew. That was intense.

302 Comments on “How To Make Croissants. [and lose your mind while doing it]”