It seriously makes my brain explode when I think about the fact that I have been walking this earth for nearly 30 years. Maybe it’s because I’m so horrific at math (I froze in the back of a cab in San Francisco this past weekend when I had to tip the driver… disaster), or maybe it’s because I usually reserve the idea of “30 years” for long lasting marriages (which uh, by the way… how the HECK have those people not killed each other? they must not be snorers or cover-stealers).But

THIRTY years?! Is this even sweet potato casserole worthy? As usual, I came to this party totally unprepared. If I was super creative or managed to think about something other than the next five minutes in front of my face, I would have made something completely chocolate-covered, bacon-infused, sugar-loaded and salty. Because salt is heaven. So this whole turning 29 thing? I’ve never been one to freak about birthdays. I’ve never spazzed at the thought of turning 30 or 40 or even 50. I mean, yesterday I spent six hours on a plane listening to Kenny G on my iPod for the second time in 48 hours. I’m pretty sure I’m closer to age 50 than 29, right? Without all the wisdom and stuff. As your typical product of the internet generation, I grew up assuring myself that by this age I’d have spent my college years being even cooler than Jessica Wakefield, the majority of my 20s gallivanting in and out of popular clubs in an even more popular city, and the rest of the time making millions of dollars, owning some kind of mansion on water somewhere, marrying someone who doesn’t come complete with a stuffed turkey, popping out four or ten Ralph Lauren polo-clad kids, and decorating my entire life a la Martha Stewart. Raise your hand if you think I read too many fiction novels.

And thanks a lot to you too, MTV.

I definitely drank the koolaid. 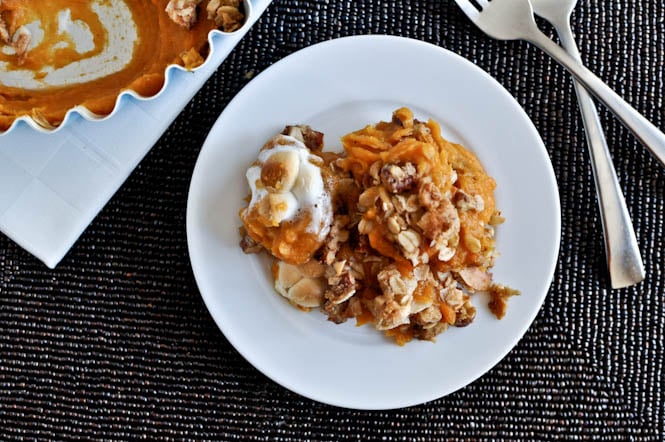 Soooo. Here I am. I cook way too much food in my kitchen and then talk about something completely other than that food to my invisible internet friends. I pretend to know what I’m doing even though many days I honestly have zero idea… ever.  I don’t wear ball gowns every weekend and I don’t sit at cool coffee shops and I don’t have a house in Malibu and I don’t have a wardrobe like Carrie Bradshaw. The money tree I planted must have began with faulty seeds because, uh… I see no bills laying in my backyard. Fail. 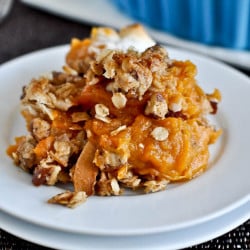 Since, like always, I spent so much time talking about myself, I forgot to tell you about that orange stuff up there. It’s good. It has less than half the sugar and butter than regular sweet potato casserole has. I threw a bunch of stuff in the dish and said a prayer that it would turn out. It has lovely coconut milk. Mmmmm. But! IT HAS BROWN BUTTER. That should be enough. Make. Now.