by Jessica June 5, 2012
There are a million things going through my head right now as I think about these donuts. Like, are some of these guys for real on The Bachelorette? No, I mean, for real-for real. Just… stop. Except for when you call quinoa “keee-noooo-ahhh.” Because that’s definitely how it should be pronounced, world.

Also, will I ever stop wearing this oversized t-shirt with a poem about girlfriends on the front of it, that I received when I WAS EIGHT YEARS OLD and that is currently on my body? The answer is probably not. It’s just soooooo soft. Sadly, I probably should not broadcast the fact that I am still physically capable of wearing a top from when I was eight years old.

Why am I so obsessed with the idea of seeing this Snow White movie? It’s not a Nicholas Spark’s movie, Ryan Gosling doesn’t have a part, and um, neither does Alexander Skarsgard, it totally isn’t from any chick-lit book (was Snow White chick lit?) and I get sort of bored with action movies. Yeah, weird. I think I just want popcorn. With something chocolatey and melty mixed in.

And finally, I would like four thousand donuts for dinner tonight. My husband has some sort of mental block on going out to breakfast. I am, in fact, obsessed with the idea of going out to breakfast because I feel like in all my years, I’ve only done it a handful of times. Such a loser. Not that like, speeding through the drive-thru for a dozen of Dunkin Donuts’ donuts is actually considered “going out to breakfast,” but seriously, I’ll take anything I can get. Annnnnd it’s also difficult for me to even GET him to eat a donut. He “claims” he doesn’t like to waste his calories on donuts, but he “claims” this through bites of an entire pizza, a large Dairy Queen blizzard, and then an entire bag of pretzels dipped in hummus at midnight. It just all seems a little fishy if you ask me.

On the other hand, I should TOTALLY be able to convince him to take me to breakfast, because when the man stumbles (and I totally mean stumbles, like walks into walls and stuff) out of bed, he puts himself to work. I swear, at 5AM he is unloading the dishwasher with his eyes closed and then heads downstairs to vacuum his car, literally minutes after waking. I have no idea where this stuff comes from, because the minute I wake up my eyes are glued to my phone. It is just so, so odd and… uncomfortable. And you are hearing this from a serious morning person. !!! Do you think that maybe he doesn’t take me to breakfast because I nag him or something? That can’t be it.

But you know, I wouldn’t even have the problem of attempting to force-feed him donuts if it wasn’t for that little Saturday over Easter when we bought a dozen mini’s for an arm and a leg… that tasted like serious heaven. I think I threw back two or three maple bacon donuts, and that’s only because my brother stole the rest before I could get my hands on them. Needless to say, I’ve been dying to make them… and to REALLY make them. Like fry the crud out of them. Yeasted, fried donuts. Serious donuts.

I don’t mind the baked donuts – actually, I make this recipe almost every month for dessert because it blows my mind – but this craving called for oil and bubbles and fluffy freaking dough. OH MAH GOSH. I could not get enough. I couldn’t stop taking bite after bite. I also succeeded in making the other member of this household take them down, and let’s just say that by the end of they day… only crumbs remained. Serious donuts… serious win. makes about 15 mini donuts (depending on how you cut them)

12 ounces of all-purpose flour, plus a little extra if needed

8 slices of bacon, fried and crumbled

Add milk to a saucepan over medium-low heat and heat until just warm enough to melt the bacon fat. Place the bacon fat in a small bowl, the pour the warm milk over top and stir constantly until it’s melted. Set side to let cool to room temperature.

In the bowl of your electric mixer (fitted with a paddle attachment or beaters), add water and yeast. Let sit for about 5 minutes until foamy, then add in milk + bacon fat combo (it must be cooled) and turn the mixer on low speed. Add in the eggs, sugar, salt, nutmeg and half of the flour mixture, mixing on low speed until combined. Add the remaining flour, mixing on medium speed until combined. Remove the paddle attachment and replace it with the dough hook, then mix on medium speed for 3-4 minutes until dough pulls away from the bowl. Mine was a bit sticky, so I added in 3-4 tablespoons of extra flour until it became smooth. Remove from the mixer, add to bowl rubbed with vegetable oil, cover and let rise in a warm place for 1 hour.

Once risen, place dough on a floured workspace and roll until about 3/8 inches thick. I also kneaded in another tablespoons of flour or so here, just so the dough was smooth. Using a biscuit cutter (or something else round that works for you), cut out circles of dough, then using a small lid (I used a washed Tabasco lid, ha!) or knife, cut out the center. Place donuts on a baking sheet, cover and let rise in a warm place for 30 more minutes.

Heat oil a large pot, making sure it is 365 degrees. Add donuts 2-3 at a time, frying on each side for about 1 minute, and flipping with a spider or slotted spoon. Remove and let drain on wire rack placed above a paper towel. When finished, dip in maple glaze then roll in bacon. Serve immediately!

Combine all ingredients together in a bowl and whisk well until a glaze forms. 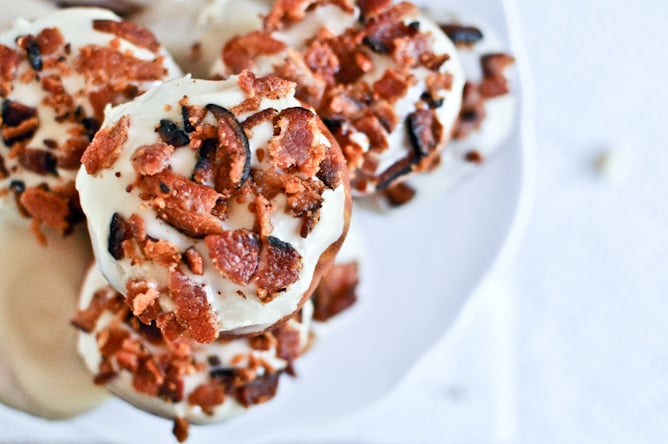 So… donuts for dinner for everyone! It’s the right thing to do.

127 Comments on “Mini Maple Bacon Donuts. (Like Real Ones!)”