Mark this day down in history… 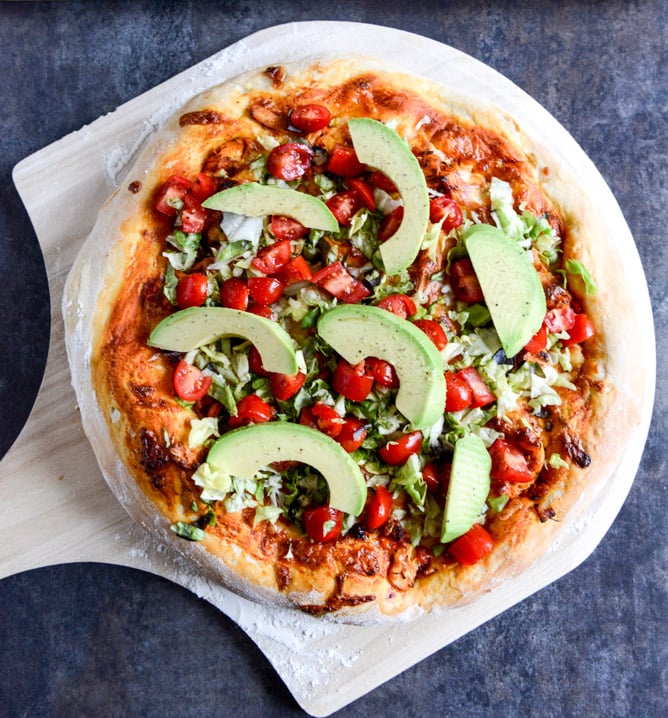 … as the first time I worked with a jalapeño and didn’t immediately and stupidly shove my fingers in my eyeballs. Well, okay – not THIS day, as in today. As in Monday. But the day that I made this pizza. Maybe I’m slowly learning? Yes. Let’s hope. I went back and forth on whether I was making a taco or an enchilada pizza. I was first settled on taco, but then once I added some enchilada sauce I decided it had to be the latter by default ingredients. But then the whole lettuce and tomatoes on top thing? Seemed too taco-ish. But then (again) once I took a bite, it’s fate was sealed: enchilada. Tastes like a big, fat chicken enchilada. Even sort of looks like an enchilada in one of those pics down below.

Enchilada pizza it was.

Was that too much information? Probs. As much as I’ve disgraced nearly every traditional dish known to man with mexican and tex-mex flavors, I had yet to truly dabble in mexican pizzas. The reason being that in elementary school I’m pretty sure there was mexican pizza on the lunch menu and it was so wretched that it scarred me for life. I don’t even remember what it was exactly – definitely not a pizza crust? – but it just had some spices and grease that turned the whole thing orange and maybe cheese. And that was IT. oomph. I hope we’ve come a long way since then.

Oh wait, don’t worry. We probably have considering that was TWENTY YEARS AGO. What? I want to cry. How is that possible? I hate being able to say that I was doing anything twenty years ago besides being 1. a mere blip on the radar or 2. in the womb. Will I ever get over this? I mean, I still paint my nails like a ten year old so I don’t have that much hope. Pretty much the only thing I do now that I didn’t do twenty years ago is cook semi-interesting meals all by myself. It’s one of my only adult-qualifying characteristics.

Side note: look at how sort of boring (because that makes sense…) this pizza is below without all the fun stuff that goes on after baking. Moral of the story: lots of trashy toppings MAKE meals. We wolfed down (is that still a verb or am I way too stuck in the 90s?) this pizza like there was no tomorrow. That says a lot for my husband, since he only likes his pizza, and I quote, “regular.” As in, not piled with a bunch of weird toppings. As in, nothing else other than sauce, cheese and pepperoni. Sometimes sausage.  Sometimes bacon!

That makes me happy. But as always, my stance on untraditional pizza is this: it’s an awesome way to switch up your weekly menu, but if you want pizza, sometimes you just need to get “regular” pizza. In this case, that means you should eat pizza twice in one week. Regular pizza and this pizza. Oh and yes, of course you can use a store-bought crust or an easier crust or a whatever-the-heck crust. I love making your life easier.